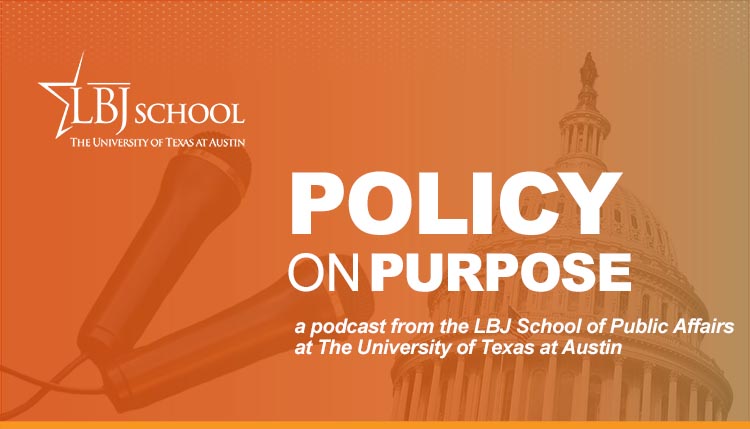 The LBJ School's podcast, "Policy on Purpose," takes listeners behind the scenes of policy with the people who help shape it. Host Angela Evans, dean of the LBJ School, dives into real-world and timely policy topics with leading experts from the school and the policy world at large.

The LBJ School has always been at the forefront of the policy issues impacting our country, and COVID-19 offers a real-time opportunity not only for our students, but also for the public to see how policy is shaped, implemented and evaluated.

Since we have not been able to record "Policy on Purpose" during the COVID-19 pandemic, LBJ scholars have created a one-of-a-kind program about the COVID-19 pandemic with the virtual series LBJ In the Arena. Sessions have focused on critical issues including restarting cities, jails and prisons, the Federal Emergency Management Agency (FEMA), the economic crisis, energy markets, modeling the spread of the virus, implementing economic recovery, the race for a vaccine, refugees, food insecurity, broadband in the U.S., and election security. Learn more.

Episode 21: 2019 LBJ School commencement speaker Yamiche Alcindor, White House correspondent for PBS NewsHour
June 5, 2019
Before speaking to the LBJ School's class of 2019, PBS NewsHour's White House correspondent Yamiche Alcindor joined "Policy on Purpose" to talk about the role and responsibility of the press when covering some of our world's most defining moments, and how to best balance humanity and objectiveness when covering difficult topics and stories. Full transcript.

Episode 20: LGBT rights and public policy
May 14, 2019
Robert Jones, the founding CEO of the Public Religion Research Institute (PRRI), joins Dean Angela Evans to discuss what the changes in religious, racial and ethnic demographies of Texas and the nation tell us about the future of politics and policy priorities. Full transcript.

Episode 19: Policymaking in theory and practice with Austin Smythe
May 6, 2019
Austin Smythe (MPAff '80), who served as policy director to House Speaker Paul Ryan (R-WI) from 2015 to 2019, visited the LBJ School for a special Admitted Students Weekend session of the Dean's Distinguished Leaders Series. Smythe worked for Ryan over 11 years in a variety of capacities, including as policy director for the House Ways and Means Committee and as staff director for the House Budget Committee (2007–15). Full transcript.

Episode 18: Opening Mexico's oil and gas industry with Aldo Flores-Quiroga
April 25, 2019
Aldo Flores-Quiroga is former deputy secretary of energy for hydrocarbons at Mexico's Ministry of Energy (2016–18), where he led a team of more than 180 government officials to implement the historic opening of Mexico's hydrocarbons sector. Flores-Quiroga, who also served as secretary general of the International Energy Forum, joins Dean Evans to talk about shared goals amid competing interests and the kinds of skills that withstand disruption. Full transcript.

Episode 16: Royce Brooks of Annie's List on changing the face of Texas politics
April 4, 2019
Royce Brooks is the executive director of Annie's List, an organization dedicated to recruiting, training and supporting women candidates for office across Texas. In this episode of "Policy on Purpose," Brooks unpacks issues of representation and diversity in politics with Angela Evans, dean of the LBJ School. Full transcript.

Episode 15: A research-based approach to criminal justice
March 21, 2019
Dallas County District Attorney John Creuzot is a retired judge and award-winning lawyer with more than three decades of experience in the criminal justice system, including as a felony district court judge, Dallas County assistant district attorney and chief felony prosecutor, as well as a criminal defense lawyer in private practice. He talks with LBJ School Dean Angela Evans about taking a research-based approach to criminal justice, and the challenges in trying to move the system away from the idea of jail as a default to the idea of a model based on treatment, reducing crime and reducing recidivism. Creuzot, who now leads an office with nearly 300 prosecutors, also discusses the idea of fostering leadership among staff and creating the leaders of the future. Full transcript.

Episode 13: Chicago Mayor Rahm Emanuel on pragmatism in politics
Feb. 27, 2019
Chicago Mayor Rahm Emanuel visited the LBJ School on Feb. 13, 2019, as part of the Dean's Distinguished Leaders Series. In this episode of "Policy on Purpose," Mayor Emanuel — who has served as mayor, a congressman, chief of staff to the president of the United States, senior adviser and campaign strategist on local and national levels — talks about his pragmatic approach to policy and what he's learned throughout his career. Full transcript.

Episode 11: Presidential historian and author Michael Beschloss on history as a roadmap for the present and the future
Jan. 23, 2019
Presidential historian and best-selling author Michael Beschloss joined LBJ School Dean Angela Evans to talk about why and how drawing on history to illuminate and improve politics and policy is critical, and what he's learned from approaching history through issues and circumstances rather than biography.
Full transcript

Episode 05: Professor Abigail Aiken on Ireland's historic referendum on abortion
May 24, 2018
Dr. Abigail Aiken, an assistant professor of public affairs and Fellow of the Richter Chair in Global Health Policy at the LBJ School, joins Dean Angela Evans to discuss a historic referendum on abortion in Ireland. Ireland's law on abortion is among the strictest in the world. Dr. Aiken presented her research findings in testimony before the Irish Parliament to inform the debate.
Full transcript

Episode 04: Texas Sen. Kirk Watson on a life in public service
May 10, 2018
Texas Sen. Kirk Watson joins Dean Angela Evans for this episode of "Policy on Purpose." First elected to the Texas Senate in 2006, Watson represents Senate District 14, which now covers most of Travis County and all of Bastrop County. In this interview, he discusses his top legislative priorities, including ready access to health care and government transparency, and his experiences formulating policy in the face of ideological differences.
Full transcript

Episode 03: The Honorable Julián Castro on housing policy
April 9, 2018
The Honorable Julián Castro, former secretary of Housing and Urban Development, marks the 50th anniversary of the Fair Housing Act signing by LBJ. He sits down with Dean Angela Evans to talk about how far we've come since the act was signed, and what challenges remain in making housing fair and available for all.

At the time of this podcast, Castro served as the Dean's Distinguished Fellow and Fellow of the Dávila Chair in International Trade Policy at the LBJ School of Public Affairs.
Full transcript

Episode 02: Professor Ruth Wasem on immigration (Part 2)
April 1, 2018
Ruth Wasem returns to "Policy on Purpose" for continued discussion on immigration in America, focusing on the four pillars presented by President Donald Trump in his State of the Union address. Wasem is a clinical professor of public policy practice at the LBJ School of Public Affairs and served as a domestic policy specialist at the U.S. Library of Congress's Congressional Research Service.

Wasem has testified before Congress about asylum policy, legal immigration trends, human rights and the push-pull forces on unauthorized migration. She teaches courses in the LBJ School on immigration, the development of legislation and more.
Full transcript

Episode 01: Professor Ruth Wasem on immigration (Part I)
March 2, 2018
We sit down with Ruth Wasem, clinical professor of public policy practice at the LBJ School of Public Affairs. For more than 25 years, Wasem was a domestic policy specialist at the U.S. Library of Congress's Congressional Research Service, and in this interview she offers her expert insights on DACA and how it fits in with our current public policy perspectives, along with the history of immigration in the United States.

Wasem has testified before Congress about asylum policy, legal immigration trends, human rights and the push-pull forces on unauthorized migration. She teaches courses in the LBJ School on immigration, the development of legislation and more.
Full transcript