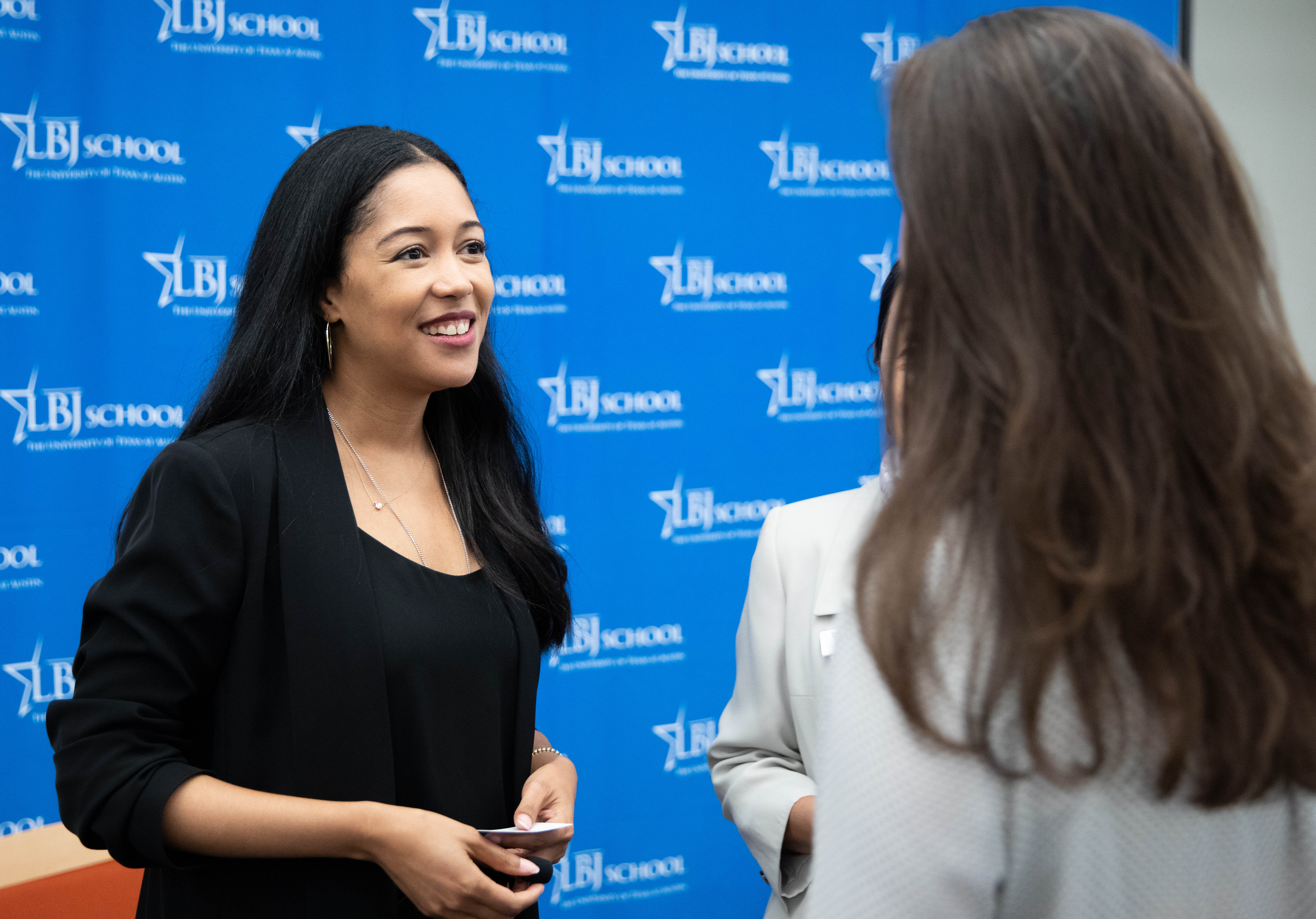 Annie's List Executive Director Royce Brooks talks with a student during a visit to the LBJ School on March 27, 2019.
(Photo by Callie Richmond)

The event was part of a new civic engagement speaker series.

Thrilled to have @AnniesListTX ED Royce Brooks here at @TheLBJSchool, Dr. D kicking us off with the reminder that 100 years ago, we ratified the 19th Amendment and 100 years later that when women run, they WIN.

Brooks spoke to a packed classroom of approximately 75 students and encouraged them to make a place for themselves in politics.

"You have a place at the table," Brooks said.

Policy on Purpose, a podcast produced by the LBJ School of Public Affairs

Transcript: The students absolutely reminded me of myself today. Eager, yet skeptical. It was really fun to get to talk to such an intelligent group of students with so many great questions.

"Part of our responsibility [as leaders] is to risk being kicked out of the room in the fight for what's right, looking after your brother." @RoyceBrooksTX during a lunchtime session @TheLBJSchool

"We @AnniesListTX talk a lot about changing the face of power in Texas. ... We're talking about lifting up the voices and the needs and the experiences of the communities that have always been there." — @RoyceBrooksTX @TheLBJSchool

"Women run when they feel they *have* to run. What we're seeing now is a record number of women feeling they have to be engaged and get involved." — @RoyceBrooksTX @TheLBJSchool on women deciding to run for office

"Real challenge, that I think is diminishing over time, is simply overcoming public skepticism." —@RoyceBrooksTX @TheLBJSchool on women of color running for office and appealing to voters as the first candidate like them @AnniesListTX

Later that evening, Annie's List Texas returned to the LBJ School to conduct a customized Candidate/Campaign 101 training. The training gives students a game plan for running for office.

Transcript: We trained over a thousand women last cycle to run for office. It's not just a blip, it's a trend. And I am so excited to see these women running not only for state legislature, but in local offices and county offices, running for Congress, and not backing down from a fight. It's exciting.

Advice for young people considering running for office, from @RoyceBrooksTX @AnniesListTX @TheLBJSchool: "Be incredibly systematic and intentional in building and maintaining your social networks." (1/3)

Advice on running for office, from @RoyceBrooksTX @AnniesListTX @TheLBJSchool: "Get involved in your community. Get involved with the issues you care about. ... The first time the people working on these issues hear your name, it should not be when you're asking for their vote."

More for potential candidates for public office, from @RoyceBrooksTX @AnniesListTX @TheLBJSchool: "Vote. It's a matter of public record, and if you haven't voted or voted regularly, your opponent can peg you as unserious." (3/3)

"@AnniesListTX isn't just about running up the numbers on electing women; it's about the change that will come of that. ... We're not going to prioritize challenging a progressive incumbent if there's something else we can do with that $ & time." @RoyceBrooksTX @TheLBJSchool

"One of the people who is really strong right now and is an introvert is @staceyabrams. ... She is really smart and deliberate about how she uses her time." @RoyceBrooksTX @AnniesListTX @TheLBJSchool on introverted candidates (1/2)

"We tell candidates, schedule your events, and then schedule your downtime. Unless you meet your own needs, you're going to burn out and won't succeed." —@RoyceBrooksTX @AnniesListTX @TheLBJSchool on potential candidates who aren't extroverts

"Are you the right person at this moment in time to hold that office? It is the most important question you can answer for yourself and the voters."

"When we at Annie's List talk about changing the face of power in Texas, we're not talking about taking advantage of some projected demographic shift. We're talking about lifting up voices and communities who are already here. We’re talking about helping those communities achieve the Texas they deserve." -Annie's List ED Royce Brooks Thank you to the The LBJ School for an incredible day with your students, who are already doing so much to build a better, more equitable world! - - - Repost from @thelbjschool - On Wednesday, March 28, Annie's List joined the LBJ School for a noontime keynote with executive director Royce Brooks. The keynote was part of the school’s new civic engagement series, led by Professor Victoria DeFrancesco Soto. Later that evening, Annie's List led a campaign/candidate 101 training for students. Many thanks to Annie's List and Royce Brooks for unpacking issues of representation and civic engagement, as well as for providing essential campaign training to LBJ students.