Panel explores the state of LGBT policy in Texas | LBJ School of Public Affairs | The University of Texas at Austin
Skip to main content
News • May 2, 2019

Panel explores the state of LGBT policy in Texas 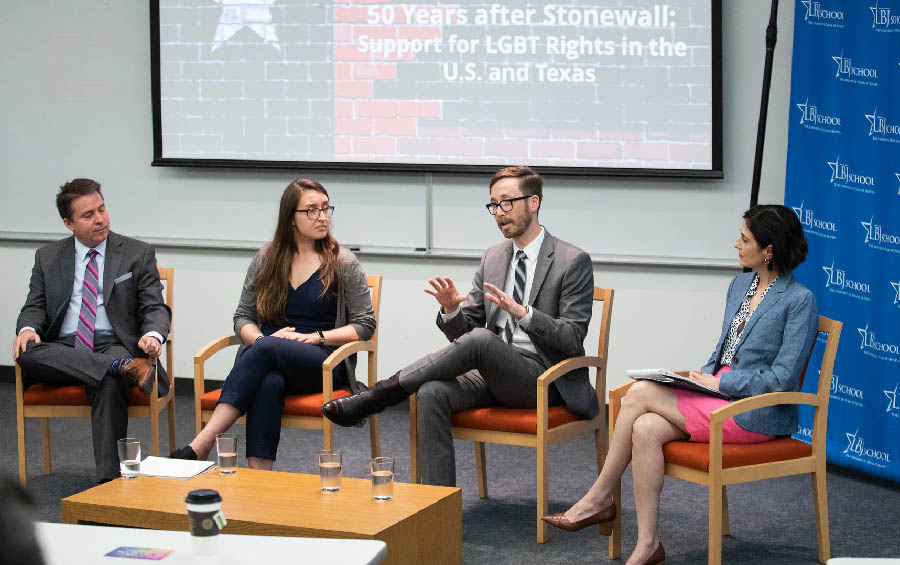 The panel discussed what the changes in religious, racial, and ethnic demographics of Texas tell us about the future of the state’s politics and policy priorities.

WATCH: Robert Jones on how religion can shape American values, and what that means for the 2020 elections.

Over the last decade, Texas demographics have shifted from 45% white + Christian to 35% white + Christian. Ten years ago only 12% proclaimed no religious affiliation compared to 22% today. Texas is becoming much more diverse. - @PRRIpoll pic.twitter.com/zpWJAaD1Yz

Join me & @PRRIpoll at the @TheLBJSchool on 4/30 as we discuss the state of LGBT rights & public policy. I'll focus on the tech sector's commitment to diversity and inclusion + our engagement at #txlege. RSVP:https://t.co/iBq039swbL

(1/5) PRRI CEO @robertpjones on voting and demographic change. "Democrats have demographic winds at their backs but Republicans have a time machine." @TheLBJSchool

(2/5) "We have this period of lag and it's mostly because white evangelicals in particular turnout to vote at higher rates than other Americans do."

(3/5) "A the ballot box, we tend to be about 2 presidential election cycles or 8 years behind in terms of demographic composition of voters and where we are as a country already."

(5/5) "The [religiously] unaffiliated are a quarter of the country but only 12% of voters. White evangelicals are 15% of country and they're 26% of voters."

Welcome to PRRI, discussing Fifty Year’s After Stonewall: how the US has dramatically shifted towards supporting LBGTQIA+ rights. ⁦@TheLBJSchool⁩ ⁦@LBJSchoolAlumni⁩ pic.twitter.com/9pzqZXfwWY

LBJ alumnus joins today’s Civic Engagement series event. He applauded the progress he’s seen, saying that forty years ago this event would not have happened. pic.twitter.com/VSGQPYgIly

Fifty years after Stonewall : where do we stand in Texas? ⁦@TheLBJSchool⁩ pic.twitter.com/BGDRyzIXRH