Strike a pose: A guide to graduation photos at UT | LBJ School of Public Affairs | The University of Texas at Austin
Skip to main content
Feature • April 13, 2021

Strike a pose: A guide to graduation photos at UT 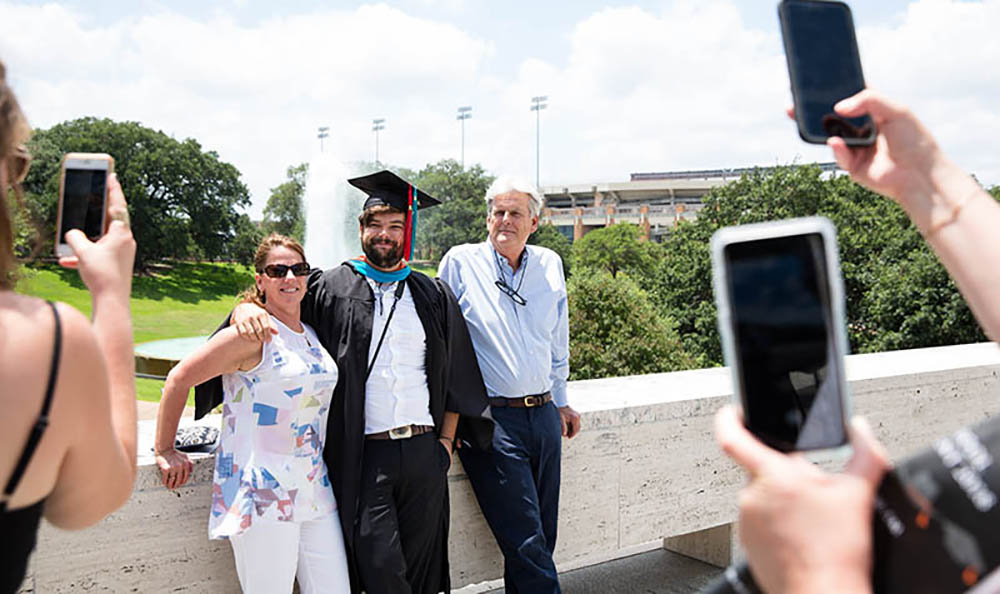 Celebrating online doesn't mean foregoing the chance to commemorate your time on the 40 Acres. So after you hit the traditional spots on campus — in front of Littlefield Fountain, the Main Mall in front of the Tower, the portico at Calhoun Hall, the blue door at Battle Hall — or decide to avoid the crowds there altogether, here are some other options — including some that hold special meaning for LBJ students.

Featured to help inspire you is one of Longhorn Nation's most photogenic citizens, and some recent LBJ grads.

The marble expanse between the LBJ School and the Lyndon Baines Johnson Presidential Library is home turf for LBJ students and features loads of possibilities for great photos, from the Tower and the fountain to the lovely wildflower sitting area. Don't forget the facade of the LBJ Library itself and the statue of President Johnson at the entrance of the building. 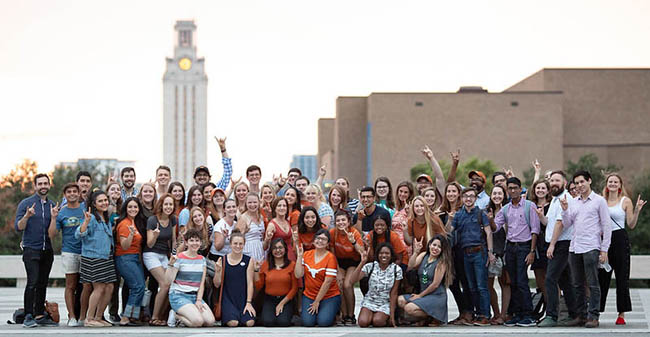 The plaza is a favorite for photos. (Photo by Callie Richmond) 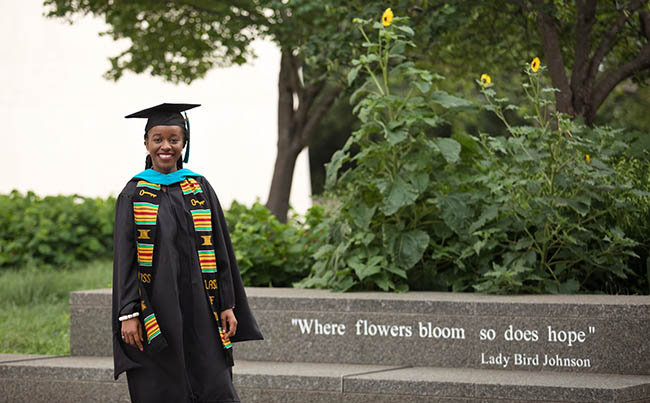 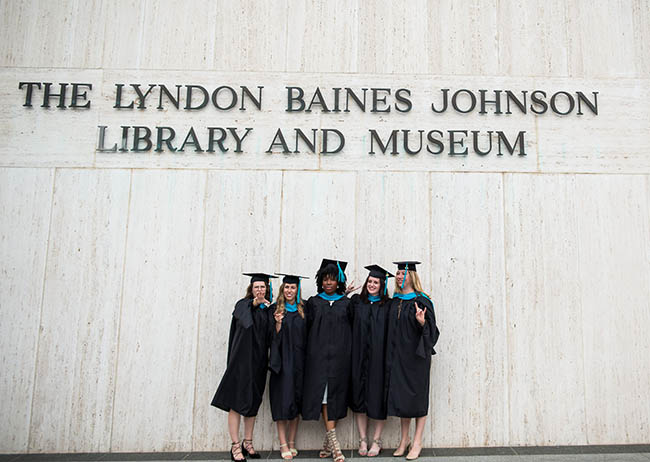 And with a little creativity, the LBJ School itself can make for a great snap. 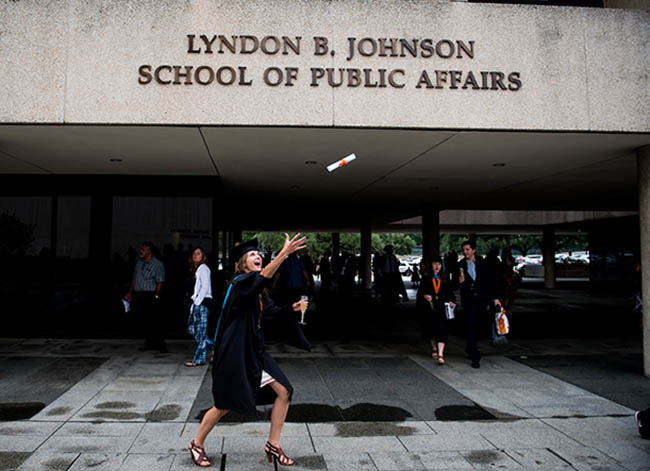 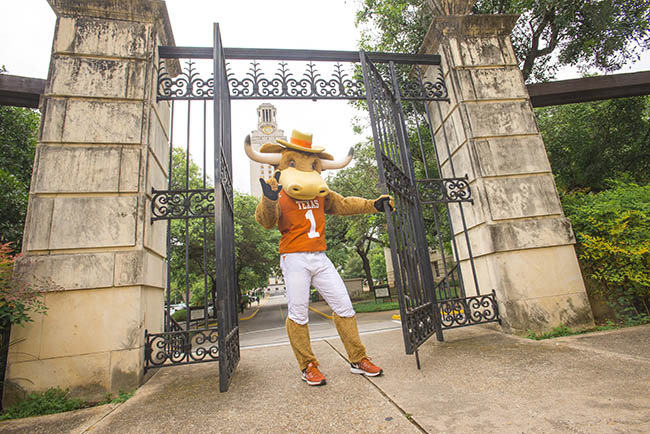 For a dramatic photo that puts a twist on the obligatory Tower shot, head to the wrought iron gates at Mary E. Gearing Hall. Situated just north of the Tower, the courtyard at Gearing offers a different view of the iconic structure while retaining the style and feel of the South Mall. That's because the building was one of the original buildings, along with the Main Building, Texas Union and South Mall buildings among others, built in 1933 as part of Paul Cret's campus master plan. 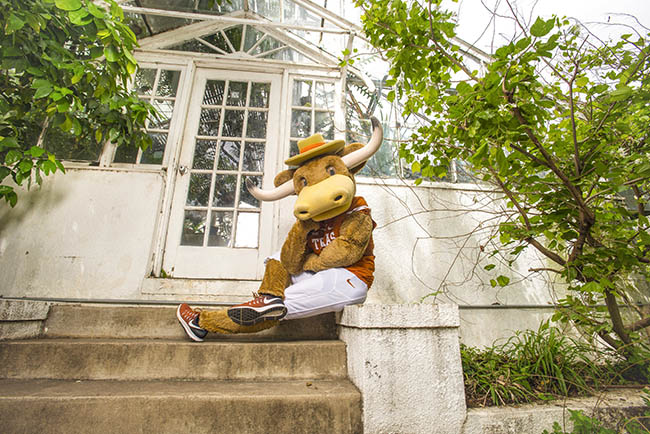 Celebrate how you've bloomed and grown amid nature's beauty at the BOT Greenhouse. Located at the western end of the Turtle Pond area and due south of the Biological Lab Building just north of the Tower, the BOT Greenhouse offers vintage charm and horticultural appeal. When the light is shining through the antique glasshouse, it offers the kind of cool, rustic setting that farm-to-table restaurants strive for. 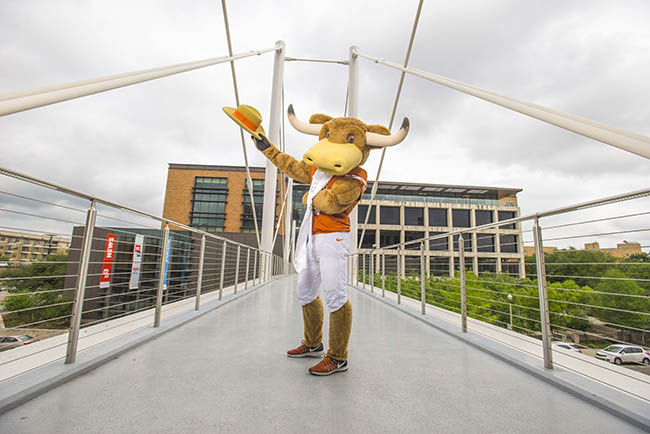 Snag some shots to bridge the gap between undergrad and postgrad. The Moody College of Communication dedicated the Moody Bridge in March 2016, making it one of the newest campus landmarks. Stretching across Dean Keeton Street, the pedestrian bridge connects the second floor of the CMA to the fourth floor of the Belo Center for New Media. 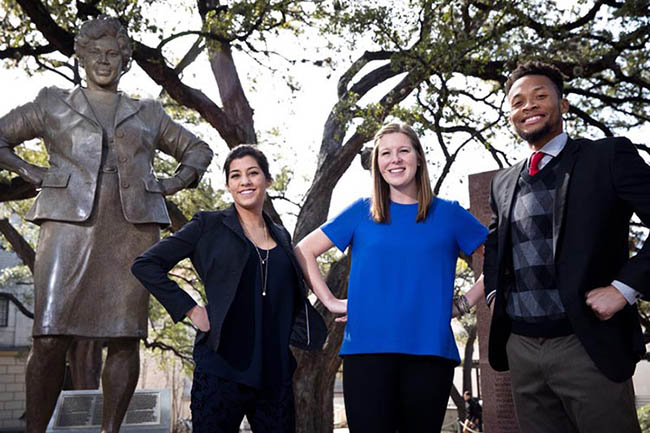 Pay a visit to the LBJ School's most distinguished former professors at the Barbara Jordan statue at the Battle Oaks at the southwest corner of 24th Street and Whitis Avenue. Jordan's trailblazing life and work are part of the fabric of the school, and celebrated each year with the Barbara Jordan National Forum.

Three intertwining live oaks that graced the grounds of the original Forty Acres when the university opened in September 1883, the Battle Oaks are among the oldest living trees on campus at upward of 250 to 300 years old. The roots of UT tradition extend deep — celebrate your place among the generations of Longhorns who have walked under these living legends.

With views of the trees in between the columns and the beautiful wood ceiling, the arcade offers a beautiful perspective from any angle. 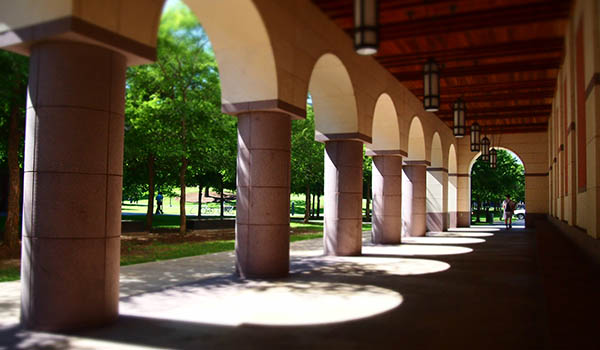 American artist Ellsworth Kelly gave the Blanton a design concept for "Austin" The a 2,715-square-foot stone building is embedded with colored glass windows in rainbow hues, creating a stunning location from any angle. 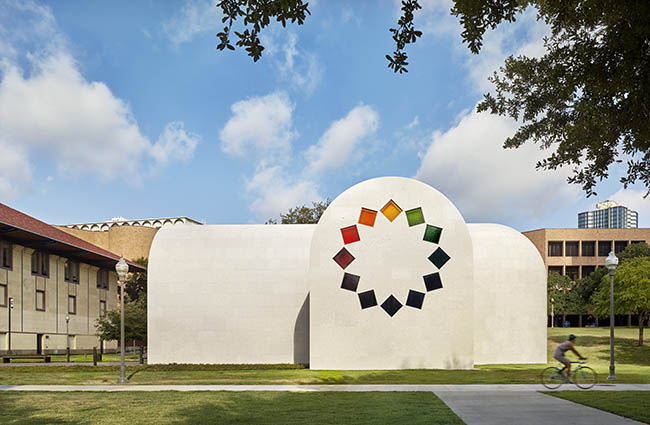 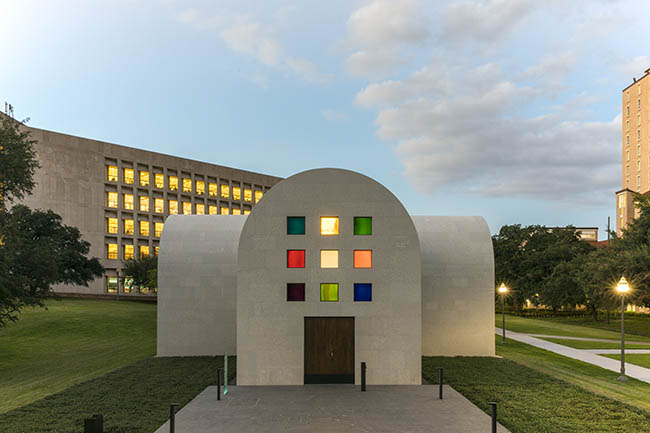 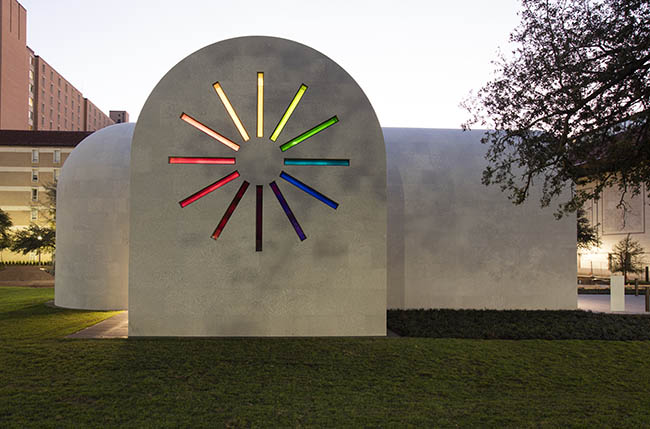 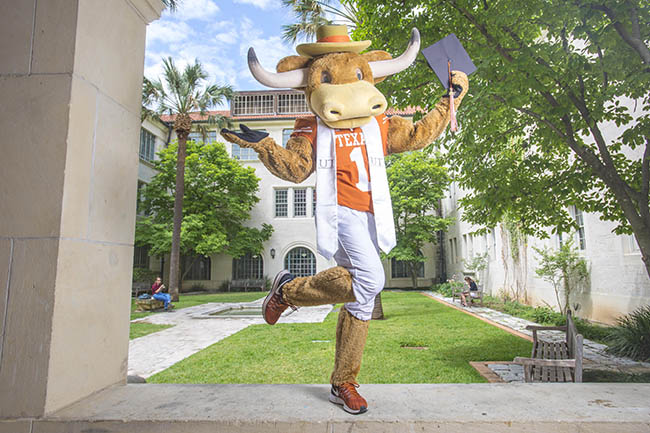 Ponder the great foundation you've built for your future in the architecturally picturesque courtyard at the School of Architecture's Goldsmith Hall. Although this spot has started to catch on as a nice setting for graduation photos, it's still less used than the South Mall. Located due west of Battle Hall, it's also very close to the traditional graduation photo spots. There are numerous spots to take photos at Goldsmith — take advantage of the romantic turquoise ironwork or verdant scenery of the Hal and Eden Box Courtyard. 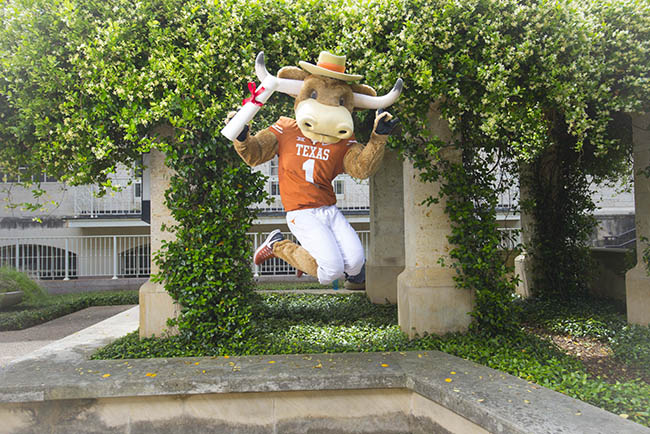 Get the obligatory ivy-covered look at the ivy-covered trellis between Benedict Hall and Mezes Halls. Fit for a collegiate fairytale, the courtyard feature was added as part of renovations to Benedict, Mezes and Batts Halls completed in 2006. The courtyard is mere steps from the Littlefield Fountain on the southeast corner of the South Mall, but not widely used for photos. Bonus: The ivy is blooming this time of year. 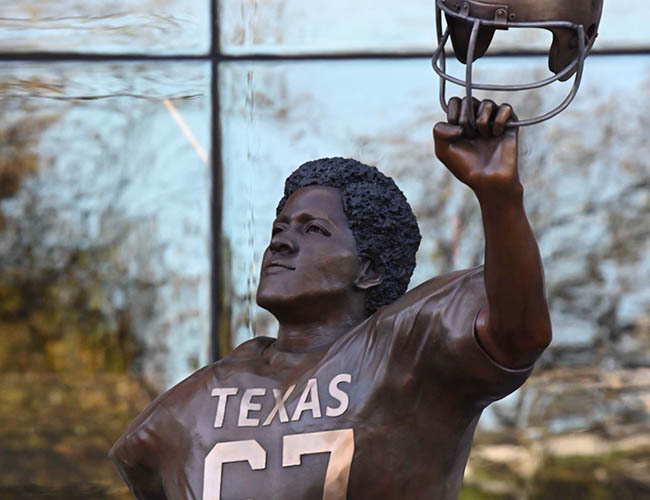 This 11-foot bronze sculpture honoring Julius Whittier, Texas's first Black football letterman and the first Black football player from Texas to earn All-American and All-Conference honors, was unveiled last November. Whittier earned three degrees from The University of Texas at Austin: an undergraduate degree in philosophy, a Master of Public Affairs from the LBJ School in 1976, and after that a law degree. He spent much of his career as a senior prosecutor in the Dallas County District Attorney's office before retiring in 2012. He died in 2018.

Like Longhorns, the spots have much in common but are also unique. Celebrate tradition while making things your own. Hook 'em!

This story, by Kylie Fitzpatrick, was originally published by UT News on April 28, 2017.