An action plan for protecting the sustainability of engineered rivers in arid lands | LBJ School of Public Affairs | The University of Texas at Austin
Skip to main content
Feature • December 8, 2020

By Jurgen Schmandt and George Ward

Twenty years ago, we convened a team of Mexican and U.S. experts to assess the future of the Lower Rio Grande (Figure 1), the 1,000 kilometer-long river segment on the U.S.-Mexico border, which supports intensive irrigated agriculture.[1] We found:

Major changes in laws, technology, and management are needed to cope with a predicted 30 percent loss of available water by 2030. The main reasons for water loss are:

Hydrological and Impact Region in the Lower Rio Grande.png 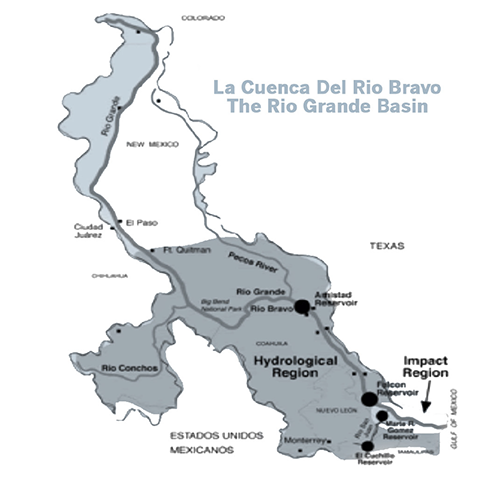 Figure 1: Hydrological and impact region in the Lower Rio Grande

To cope with these challenges, we recommended that irrigation districts and farmers, the key actors in the impact region, adopt less water-intensive irrigation technologies and shift to less water-demanding crops. This would maintain economic sustainability. Environmental sustainability, on the other hand, would require additional actions.

In 2014, with funding from the Mitchell Foundation, we convened a workshop in Austin to find out whether other rivers worldwide face similar problems. Experts from different continents attended, reported on the challenges faced in their river basins, and expressed interest in joining an international project to define appropriate response strategies.

Major changes in laws, technology, and management are needed to cope with a predicted 30 percent loss of available water by 2030.

The resulting project, Sustainability of Engineered Rivers in Arid Lands—SERIDAS, brought together an expert for each of 10 rivers, as well as specialists studying key factors that impact river hydrology. The name SERIDAS is inspired by ARIDAS, an earlier project which studied the devastating impacts of droughts in Northeast Brazil. Antonio Magalhães directed ARIDAS. Schmandt participated in his project and Magalhães became a founding member of SERIDAS.

The SERIDAS team met for additional workshops in Germany, supported by the Volkswagen Foundation, and Italy, supported by the Rockefeller Foundation. Two policy research projects at the LBJ School also contributed to the project.[2] We published preliminary results in 2017.[3] In June 2020, we submitted a 19-chapter manuscript to Cambridge University Press. We expect the book to be published in 2021.[4] In the following pages we summarize our findings and recommendations. 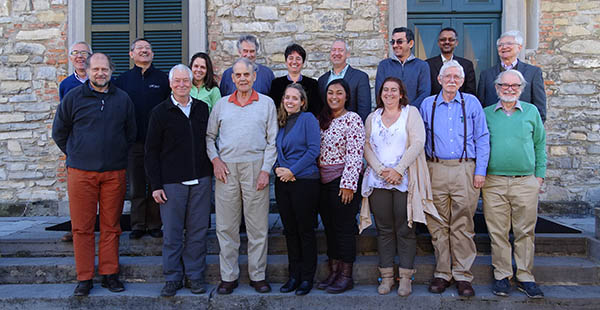 The SERIDAS team at their 2017 workshop in Bellagio, Italy, with Jurgen Schmandt, doctoral student Regina Buono and MPA student Sephra Thomas representing the LBJ School. Aysegul Kibaroglu (Turkey) and Antonio Magalhães (Brazil) were visiting professors at the School. George Ward is a hydrologist at UT Austin; Jerry North is a climatologist at Texas A&M University.

"We asked whether ten rivers in arid lands, all home of intensive irrigated agriculture, can provide a sustainable water supply in light of massive challenges, such as climate change, reservoir sedimentation and population growth. We recommend concrete steps that river managers should take to provide a dependable water yield that will maintain or restore economic and ecological sustainability in their basins." —Jurgen Schmandt

The rivers included in the project are Nile, Euphrates-Tigris, Yellow, Murray-Darling, São Francisco, Limari, Colorado, Rio Grande, and Jucar (Figure 2). They are representative of irrigation-intensive rivers worldwide (Figure 3). According to the UN Food and Agriculture Organization irrigation from rivers and aquifers accounts for 40 percent of global crop production.[5]

The physical systems of the 10 rivers share important characteristics: Mountainous headwaters (Himalaya, Andes, Rocky Mountains, etc.) provide reliable river flow from glaciers, snowpack, or rainfall. Hundreds of kilometers downstream the local climate is arid or semi-arid, but the soil is fertile as a result of millennia of sediment accumulation from annual spring floods. Irrigated agriculture has long taken advantage of these conditions, in the process giving birth to ancient civilizations—Mesopotamia, Egypt, China, and the Americas—that flourished over thousands of years.

Over the course of the last century, large-scale engineering enhanced this age-old system. Dams, bypass canals, and distribution channels were built to generate electricity, increase food production, control flooding, and supply water to riverine cities. The first engineered dam, completed in 1902, was built on the Nile. This was followed by two dams on the Rio Grande, opened in 1914 and 1916. Since then, all of the SERIDAS rivers followed suit, building one or several modern reservoirs. 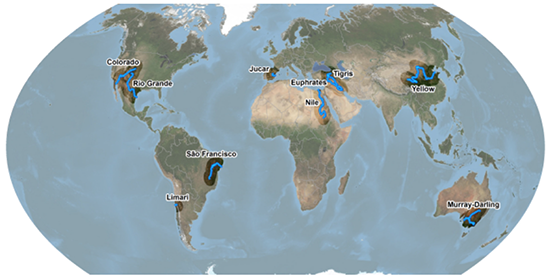 The best response to these challenges requires changes in water management. Managers, using the longest period of record available, should determine how engineered rivers in arid regions have met social and environmental needs during periods of low river flow or drought. This dependable yield—a mathematical construct based on the constant volume of withdrawn water that can be met without failure—serves as the single most important management tool for controlling reservoir performance and is often used as a basis for allocation of water from a reservoir system.[6] It should be carefully monitored and recalculated whenever natural or social conditions in the basin reduce water supply or increase water use. Based on the concept of dependable yield we propose this action plan for protecting or restoring the sustainability of reservoir-dominated rivers in arid lands:[7] 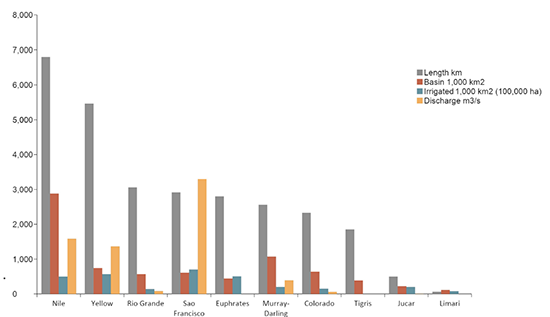 We conclude with three sobering comments to remind us of the big obstacles that stand in the way of meeting these sustainability goals:

Management practices. Each of our four recommendations calls for a departure from the usual management practices in most river basins. We invite river managers to adjust their views and procedures so that sustainability becomes their principle goal.

Water conflicts. Where water becomes the core of, the trigger to, and a weapon in active conflict, the goal of sustainable water supply and demand is unattainable. For example, sub-state level conflicts and illegal control of water resources and water infrastructure deprive people from access to sufficient clean water, energy, and food resources in the Euphrates-Tigris region. The lack of water undermines the search for sustainable development and causes agricultural, economic, and political decline. Sustainability in a river basin requires stability as well as participatory, transparent, inclusive, and accountable governance structures.

Sustainable water management requires a consideration of the connections between river water and groundwater.

Only when these issues are addressed can rivers cope with the looming problems of water scarcity, climate change and variation, reservoir sedimentation, population growth, economic losses, food security, and ecological damage.

The SERIDAS project did not address the impact of the corona virus on water resources, but a European study suggests the following connections:

Article: How to treat the coronavirus in the water cycle?

Jurgen Schmandt is professor emeritus at the LBJ School of Public Affairs, University of Texas, Austin. He simultaneously served as director of the Mitchell Center for Global Change, Houston Advanced Research Center. George Ward is retired from the University of Texas Center for Water and the Environment, where he served as Associate Director and continues to perform research on the mechanics of watercourses.