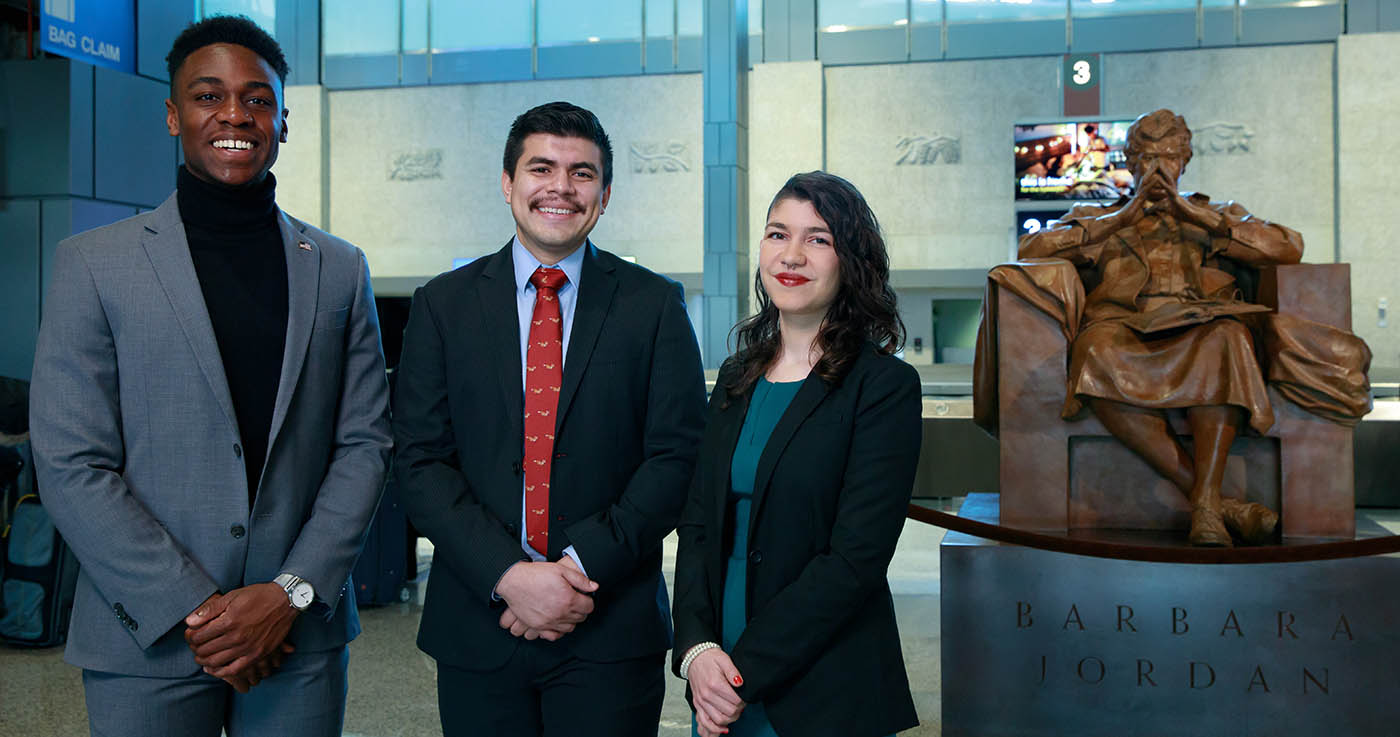 Students at the Lyndon B. Johnson School of Public Affairs at The University of Texas at Austin paid tribute to the life and legacy of former congresswoman, distinguished public servant and teacher Barbara Jordan during the 23rd annual Barbara Jordan National Forum, Feb. 17–21, 2020.

Inclusion and social justice were central to this year's signature, student-led weeklong program, whose theme, "We, the People," is inspired by Jordan's words: "I felt somehow for many years that George Washington and Alexander Hamilton just left me out by mistake. But through the process of amendment, interpretation, and court decision I have finally been included in We, the people." LBJ School students Joel Carter, Aaron Escajeda and Sarah Gonzalez Claytor served as co-chairs of the event and planned the week in conjunction with Professors Peniel Joseph and Victoria DeFrancesco Soto.

Joseph, director of the Center for the Study of Race and Democracy, holds the Barbara Jordan Chair in Ethics and Political Values. DeFrancesco Soto is the director of civic engagement at the LBJ School. 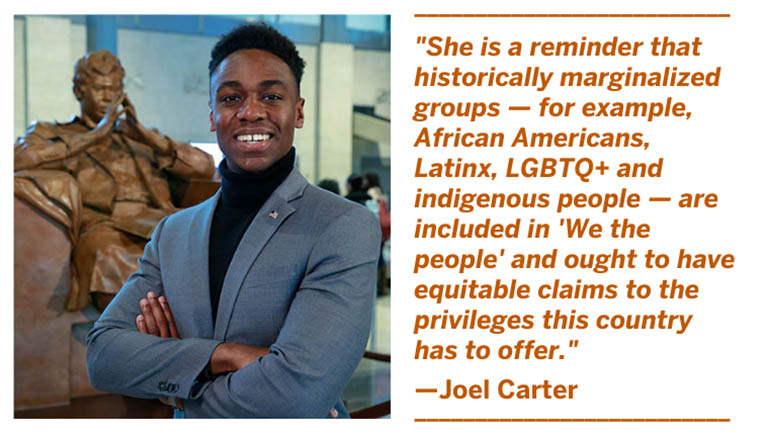 In light of her legacy as a leader in advocating social change, Jordan "is a reminder that historically marginalized groups — for example, African Americans, Latinx, LGBTQ+ and indigenous people — are included in 'We the people' and ought to have equitable claims to the privileges this country has to offer," said Carter. "Her statement 'I have finally been included in We, the people' leaves me to reflect on how far we as nation have come to extend that notion, but also the change we must invoke to continue doing so." 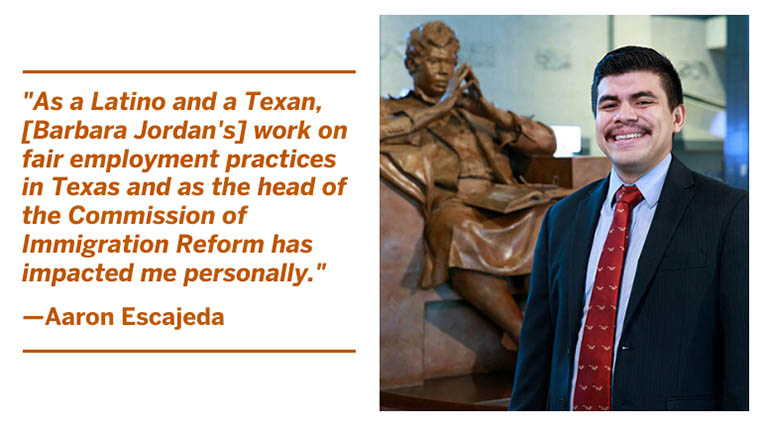 "Growing up post-Barbara Jordan, it is easy to overlook the impact that she had on my life," said Escajeda. "However, as a Latino and a Texan, her work on fair employment practices in Texas and as the head of the Commission of Immigration Reform has impacted me personally."

"June and I are choosing to participate in the forum because we believe in the legacy of Rep. Barbara Jordan," said Angela Provost, who will take part in one of the forum events as a featured speaker. "We acknowledge her tenacity to strive toward a better society, which includes civil rights and female empowerment as sources of inspiration for our own life's mission." 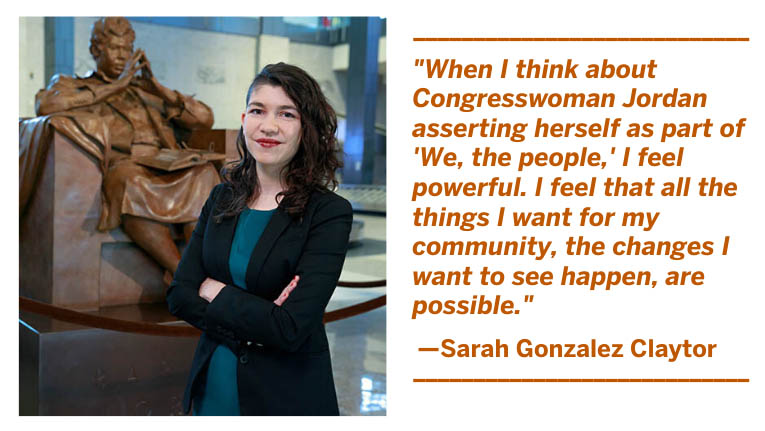 Reflecting on the theme of this year's forum, Gonzalez Claytor said, "When I think about Congresswoman Jordan asserting herself as part of 'We, the people,' I feel powerful. I feel that all the things I want for my community, the changes I want to see happen, are possible. I hope that our theme will prompt the LBJ community to consider who we include and who we overlook, intentionally or unintentionally, in our policies and programs."

Feb. 15–Feb. 22
The Barbara Jordan Freedom Foundation is displaying an interactive exhibit of Barbara Jordan's life at the Texas Capitol.

Monday, Feb. 17
Event: "Community Outreach with the Weird City Sisters" — REGISTER TO ATTEND
Hosts: Pride Policy Alliance
Location: 3.122, LBJ School of Public Affairs
Time: 12:15–1:30 p.m.
Details: Please join LBJ's Pride Policy Alliance for a discussion with The Weird City Sisters of the Sisters of Perpetual Indulgence. The Weird City Sisters are proponents of community networking to make community outreach as effective as possible. We proudly host this organization, recognizing them as leaders who work towards health, well-being and equity for the queer community in Austin. In addition to their work in harm reduction, the Weird Sisters support organizations like AIDS Services of Austin, OutYouth, and KindClinic. Their work with these organizations helps provide access to services to groups of people who otherwise would not have access. Join us for an in-depth conversation about the challenges, needs, and joys of serving the queer community in Austin. A light lunch will be served.

Tuesday, Feb. 18
Dr. Peniel Joseph, founding director of the Center for the Study of Race and Democracy at The University of Texas at Austin and Barbara Jordan Chair in Ethics and Political Values at the LBJ School of Public Affairs, will participate in a special media preview as the media representative of the Barbara Jordan exhibit on Tuesday, Feb. 18.

Details: Join us for a conversation with Dr. Peniel Joseph and Dr. Edwin Dorn on the legacy of Barbara Jordan. We will be discussing her activism during the Civil Rights Movement, her relationship with President Lyndon B. Johnson and her leadership here at the LBJ School.
Lunch will be provided.
Location: 3.122, LBJ School of Public Affairs
Time: 12:30–1:30 p.m.