Surveying the landscape: LBJ's Bixler develops an interactive map of the Texas Water Policy System | LBJ School of Public Affairs | The University of Texas at Austin
Skip to main content
News • May 25, 2021 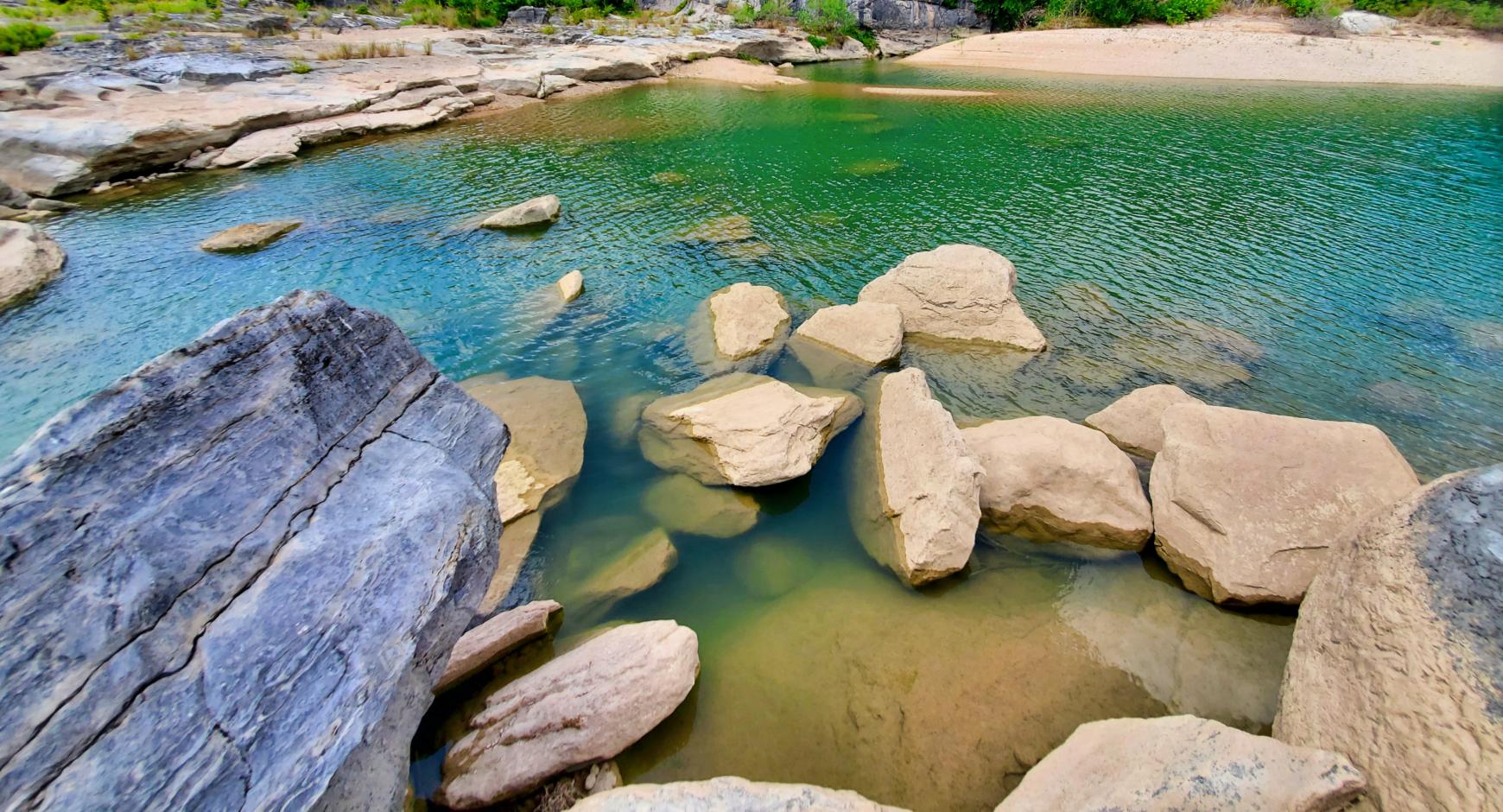 RGK Center faculty and staff are collaborating with Texas Water Foundation to develop an interactive map of the Texas water systems landscape. The Texas Water Systems Map is the first comprehensive policy system map of the Texas water sector and will help equip decision-makers and stakeholders with the knowledge to better understand the complex water landscape at the state and local levels.

"Systems maps are a tool to explore the system—in this case, the policy and governance of Texas water," said Patrick Bixler, Ph.D., an assistant professor at the LBJ School of Public Affairs and core faculty member at the RGK Center for Community Service. "They help different stakeholders understand and communicate about the interconnections in the system, and assists in identifying knowledge gaps, intervention points and insights."

Bixler, LBJ School Ph.D. candidate Regina Buono and Ethan Tenison, project manager of Data Initiatives at the RGK Center, developed the interactive map using cognitive modeling and data analysis. The idea for the map has been several years in the making and was developed out of a collaboration among several organizations.

In 2016, Bixler co-authored research examining the networks of land and water conservation across the Texas Hill Country. Researchers examined patterns of social interaction to visualize complex data and demonstrate "the strengths and weaknesses of a network's structure and identify gaps and opportunities to enhance collaborative efforts." After releasing this report, Bixler and others in the Texas Water Research Network began discussing the possibility of conducting similar research for the entire state of Texas, focusing on water issues.

"The Hill Country project illustrated what was possible in terms of using a network approach to understand the stakeholders in a region and identify ways for better coordination and collaboration. We immediately knew that something like this at a state level could have a real impact," said Bixler.

Sarah Schlessinger, CEO of Texas Water Foundation, saw the potential early on for the use of an interactive map to help decision-makers better understand the interconnected, complex water landscape in Texas and ultimately address the shortfall in the state's water budget.

"Texas' state water plan is based on a bottom-up, stakeholder-directed planning process," said Schlessinger. "That means decision makers at the local and regional level are responsible for deciding how resources are allocated, and how to address future water budget challenges."

She began working with Bixler, Buono, Tenison and other partner organizations to gather and analyze data that could be developed into a tool for stakeholders and decision-makers at all levels—from state legislators to the general public—to develop strategies to improve efficiency and access. 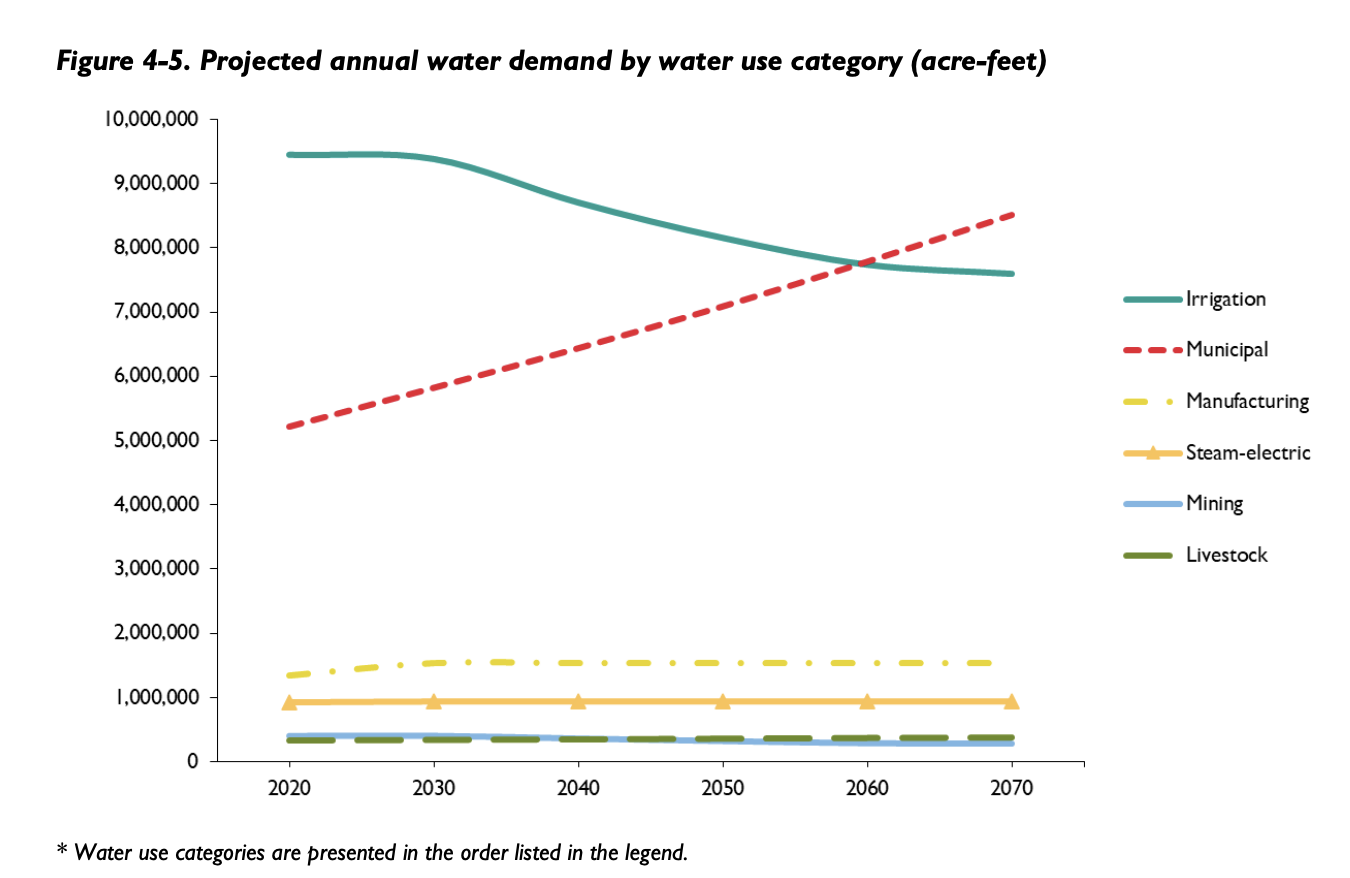 The plan also identifies water management strategies to close this gap in the water budget. Of these strategies, 40% must come from water conservation and reuse; this may consist of infrastructure improvements, implementation of efficiency standards, improving technology, or other policies.

According to the draft 2022 State Water Plan, failure to implement effective strategies listed in the plan could result in estimated annual economic losses resulting from water shortages of approximately $153 billion in 2070. Without effective conservation and reuse policies in place, "approximately one-quarter of Texas’ population in 2070 would have less than half the municipal water supplies they will require" during a drought of record—the worst recorded drought in the state since compilation of meteorologic and hydrologic data began, last recorded in the 1950s.

"If we want meaningful participation and to have a meaningful approach to our conservation and reuse target, we want to provide tools...to navigate this complexity," said Schlessinger. "The system map is just one part of that, where we can show how these complex systems interact with each other to equip decision-makers."

In this case, decision-makers include not only state and local officials, but business sector representatives and the general public, as well. After SB1 passed in 1997, the process of developing the state water plan changed from a top-down approach to a bottom-up approach, hinging on the participation and coordination of everyone from city and county officials to members of the general public.

"The Hill Country project illustrated what was possible in terms of using a network approach to understand the stakeholders in a region and identify ways for better coordination and collaboration. We immediately knew that something like this at a state level could have a real impact." —Patrick Bixler

Unfortunately, the water system can be difficult to comprehend, resulting in not only members of the general public, but also many state and local officials not having a clear understanding of the complex and nuanced ways the water system operates across sectors. This map is just one piece in the effort to make all stakeholders more "water-fluent" and, as a result, the system more equitable and accessible for all.

"From an access perspective, the hope is that the system map will contribute in some way to help navigate what is a complex system that is premised on the idea of public participation," said Schlessinger.

Texas Water Foundation (TWF) produces water policy issue briefs on a variety of topics, including a recent brief on Equity and Access. In it, TWF outlines the challenges affecting water security and water equity in Texas. An estimated 42,000 households in Texas lack access to adequate plumbing facilities, and factors such as race, immigration status, rural communities, or mobile homes greatly affects a household’s propensity for water insecurity.

One of the challenges listed in the brief is that of representation, especially that "marginalized communities are not always represented in decision-making, planning, or opportunities for public input." Texas' decision-making process regarding the state water plan is structured to welcome and depend on public input, though access issues, in addition to the availability of information about the water system, can often impede members of the general public from participating meaningfully in these conversations.

"Think about it in terms of civic engagement–if you want to participate in a public stakeholder meeting, and you want to be equipped to be able to do that, you have to think about things like what time the meeting is being held," said Schlessinger. "Do people who have to go to a job or provide child care have the ability to attend that meeting? How clear was the notice and where was it posted?"

The 2022 State Water Plan is currently in draft form. After reviewing public comments, the Texas Water Development Board will consider adopting the plan at their board meeting in July. 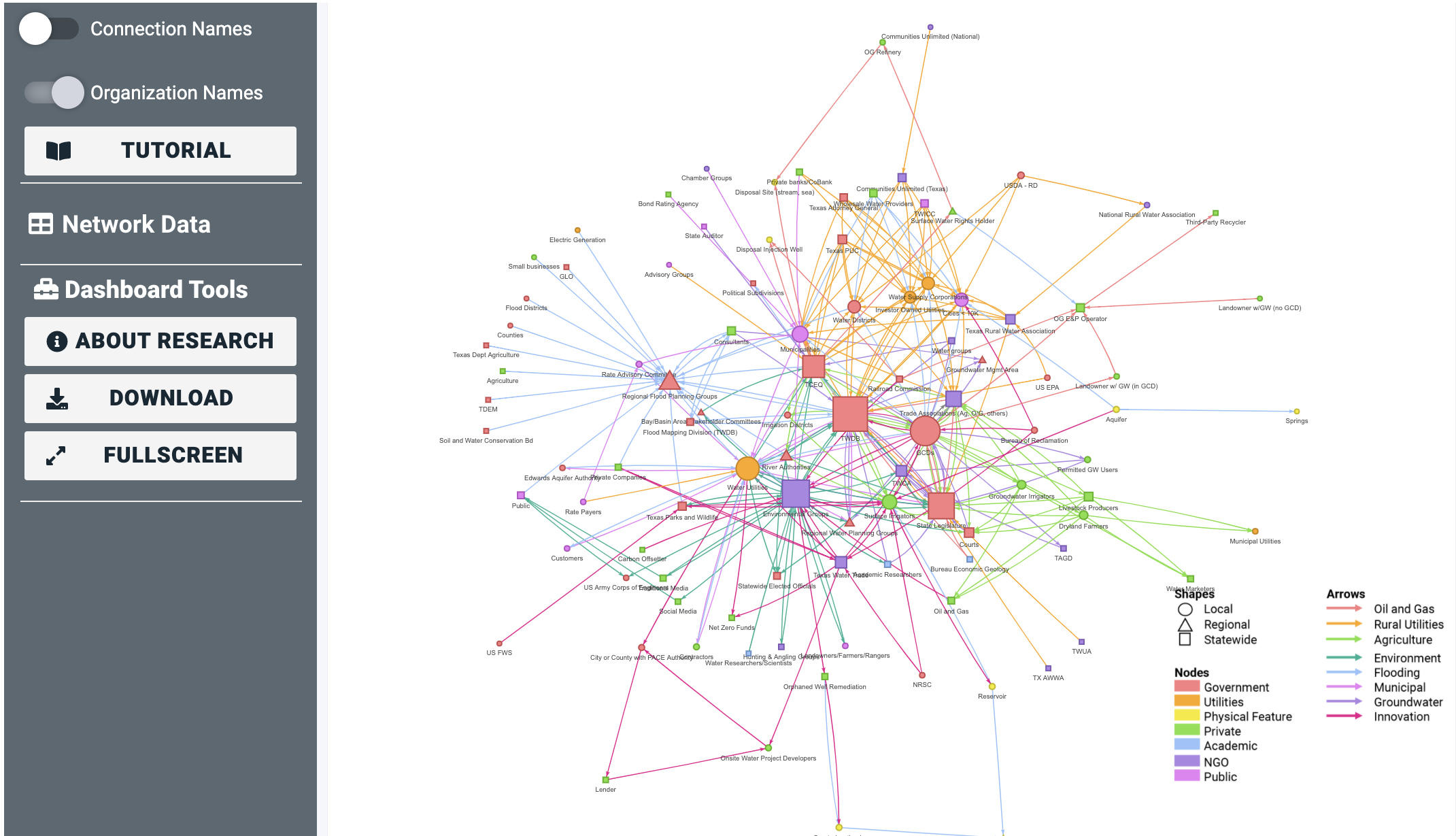 The Texas Water Systems Map is an interactive tool that can be used by everyone from local elected officials to members of the general public to better understand the different actors and relationships in the Texas water system.

The map was developed using a technique called "fuzzy cognitive modelling," relying on 10 interviews with subject matter experts from public and nonprofit organizations to map out water system relations as they exist in the experts' mental landscape. After interviewing the experts and sketching out the "mental map" of the connections of the water system on paper, the sketches were transformed to a digital map and eventually the data was analyzed using R software and systems mapping and network analysis techniques.

"It was really surprising to see how the various layers differed in terms of the types and frequencies of policy, governance and market mechanisms," said Bixler. For example, the institutions involved in groundwater management are connected most frequently by sharing information, whereas in agriculture many of the connections involve monetary transactions.

Before interviewing the subject matter experts, Bixler and Buono first conducted a focus group to determine what "layers" should be included in the map. The map includes the option to organize and view data by sector (i.e., agriculture, oil and gas, academic, utilities), though Bixler notes that other important layers such as equity, human health and recreation, are missing in the current version.

Dr. Bixler and Tenison plan to continue developing the systems map with more specific, local data. Over the summer, they plan to launch a survey to collect data on the hundreds of organizations and agencies engaged in the water sector in Texas.

Texas Water Foundation is also developing an interactive workshop for decision-makers outside of the water sector and plans on using the water systems map as part of the process. Once available, these workshops will be offered to legislative staff, business leaders, and local decision makers to equip them to make informed decisions about water in Texas.