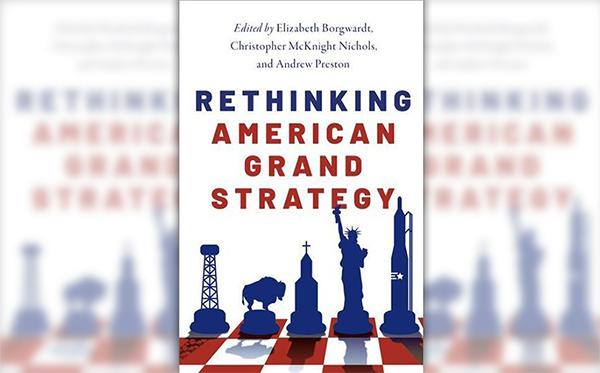 On Wednesday, Sept. 22, the Clements Center for National Security and the UT-Austin History Department will host Christopher Nichols, Adriane Lentz-Smith, Andrew Preston, Charles Edel and Will Inboden for a panel discussion on their new release, Rethinking American Grand Strategy. Join us on Zoom at 12:15 p.m. CT. Virtual doors open at noon CT.

Christopher McKnight Nichols is the director of the Center for the Humanities and the Sandy and Elva Sanders Eminent Professor in the Honors College at Oregon State University, where he is an associate professor of history. An Andrew Carnegie Fellow, Nichols is best known for authoring Promise and Peril: America at the Dawn of a Global Age (Harvard, 2011, 2015). He is editor or author of five other books, including the recently published Rethinking American Grand Strategy (Oxford, 2021), which he co-edited with Andrew Preston and Elizabeth Borgwardt. His next book, co-edited and co-authored, is Ideologies and U.S. Foreign Relations: New Histories (out from Columbia University Press in 2022).

Adriane Lentz-Smith is an associate professor and the associate chair in Duke University's Department of History, where she teaches courses on the civil rights movement, Black Lives, modern America and history in fact and fiction. A scholar of African American history as well as the histories of the 20th-century United States and the U.S. and the world, Lentz-Smith is author of Freedom Struggles: African Americans and World War I (Harvard University Press, 2009). The book explores how African Americans worked through ideas of manhood, citizenship and global encounter to pursue the Black freedom struggle during World War I and build the civil rights movement that followed. Her article, "The Unbearable Whiteness of Grand Strategy," is among those in Rethinking American Grand Strategy (Oxford University Press, 2021).

Charles Edel is a global fellow at the Wilson Center and a senior fellow at the United States Studies Centre at the University of Sydney. Edel's research and policy expertise is in the politics and security of the Indo-Pacific, U.S. strategy toward the region, American foreign policy, grand strategy and American political history. He is the co-author of The Lessons of Tragedy: Statecraft and World Order (2019) and author of Nation Builder: John Quincy Adams and the Grand Strategy of the Republic (2014). Currently, he is working on a book examining America's history of dealing with authoritarian regimes. In addition to his scholarly publications, his writings appear in the Washington Post, Foreign Affairs, Foreign Policy, The American Interest and other outlets. He also regularly offers foreign policy commentary on television and radio, including CNBC, ABC, Sky News, Australia's RN and NPR. Previously, Edel was associate professor of strategy and policy at the U.S. Naval War College, and served on the U.S. secretary of state's policy planning staff from 2015 to 2017. In that role, he advised the secretary of state on political and security issues in the Asia-Pacific region. He also has worked at Peking University's Center for International and Strategic Studies as a Henry Luce Scholar, was awarded the Council on Foreign Relations International Affairs Fellowship, and taught high school history in New York City. A New York native, and an officer in the U.S. Naval Reserves, Edel holds a Ph.D. in history from Yale University, and received a B.A. in classics from Yale College. He lives in Virginia with his wife, children and dog. Follow him on Twitter: @CharlesEdel.

William Inboden is the executive director and William Powers, Jr. Chair at the William P. Clements, Jr. Center for National Security at The University of Texas at Austin. He also serves as associate professor at the LBJ School of Public Affairs, distinguished scholar at the Robert S. Strauss Center for International Security and Law, and editor-in-chief of the Texas National Security Review. Inboden's other current roles include associate with the National Intelligence Council, member of the CIA's Historical Review Panel, member of the State Department's Historical Advisory Council and nonresident fellow with the German Marshall Fund of the United States. Previously he served as senior director for strategic planning on the National Security Council at the White House, where he worked on a range of foreign policy issues including the national security strategy, strategic forecasting, democracy and governance, contingency planning, counter-radicalization and multilateral institutions and initiatives. Inboden also worked at the Department of State as a member of the policy planning staff and a special advisor in the Office of International Religious Freedom, and has worked as a staff member in both the U.S. Senate and the House of Representatives. Inboden has also served as senior vice president of the London-based Legatum Institute, and as a civitas fellow at the American Enterprise Institute. He is a life member of the Council on Foreign Relations, a contributing editor to Foreign Policy, and his commentary has appeared in outlets including the Wall Street Journal, New York Times, Washington Post, Los Angeles Times, USA Today, Politico, Weekly Standard, NPR, CNN, BBC and Sky News. He has lectured widely in academic and policy settings, testified before the U.S. House Armed Services Committee, and received numerous research and professional development fellowships. Inboden is the author of Religion and American Foreign Policy, 1945-1960: The Soul of Containment (Cambridge University Press), co-editor of The Last Card: Inside George W. Bush's Decision to Surge in Iraq (Cornell University Press), and has published numerous articles and book chapters on national security, American foreign policy and American history. His current research includes a book on the Reagan administration's national security strategy and policy, titled The Peacemaker: The Reagan Presidency from War to Peace. Inboden received his Ph.D. and M.A. degrees in history from Yale University, and his A.B. in history from Stanford University.

REGISTRATION IS REQUIRED FOR ALL VIRTUAL AND IN-PERSON EVENTS