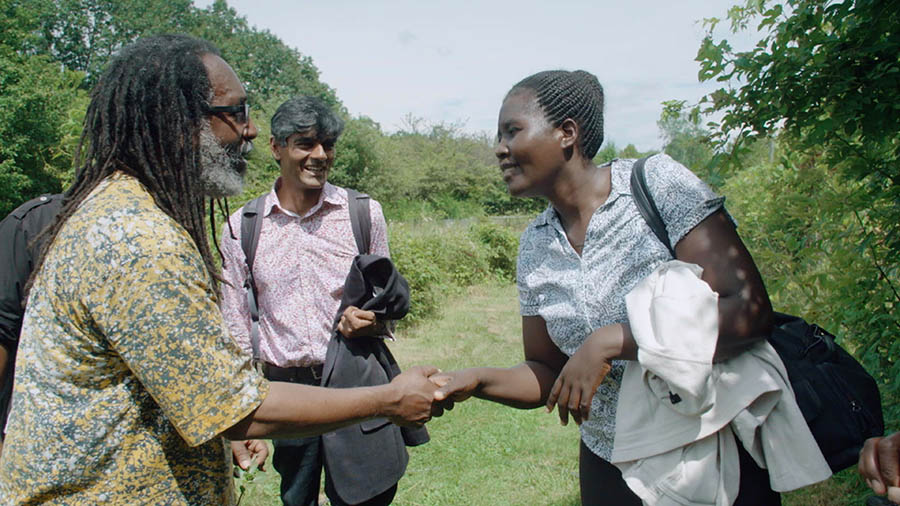 A new documentary film from LBJ School Research Scientist Raj Patel tells the story of a Malawian activist trying to save her home from extreme weather. A decade in the making, the documentary, titled "The Ants and the Grasshopper," follows farmer and activist Anita Chitaya from coast to coast and across rural-urban divisions and schisms of race, class and gender in her efforts to persuade Americans that climate change is already happening. Chitaya's journey takes her from Malawi to Oakland to Washington, D.C. to speak with farmers, climate skeptics and policymakers.

The documentary, which began when Patel first traveled to Malawi in 2012, weaves together the most urgent themes of our times: climate change, gender and racial inequality, the gaps between the rich and the poor, and the ideas that groups around the world have generated in order to save the planet.

"This documentary was launched from the recognition that to defeat climate change, we'll need big, transformative change," Patel said in a director's statement. "We asked whether such change as possible, and what it'd look like. We found answers to both those questions. More than that, we were changed in the making of this film."

Congratulations to #LBJSchool research professor @_RajPatel! His upcoming documentary “The Ants and the Grasshopper” (also recently featured in @newyorker) premieres in Telluride @Mountainfilm this weekend.

Called "charming, infuriating" and "big-hearted" by the New Yorker, "The Ants and the Grasshopper" has already been well received. It premiered Memorial Day weekend in Telluride at the Mountain Film Festival, where Patel was also named the winner of the 2021 Moving Mountains Award, which honors films that focus on social justice and impact.

"The Ants and the Grasshopper" will premiere globally at Sheffield International Documentary Film Festival on June 9.

Produced by Kartemquin Films, "The Ants and the Grasshopper" was directed by Raj Patel and Zak Piper.