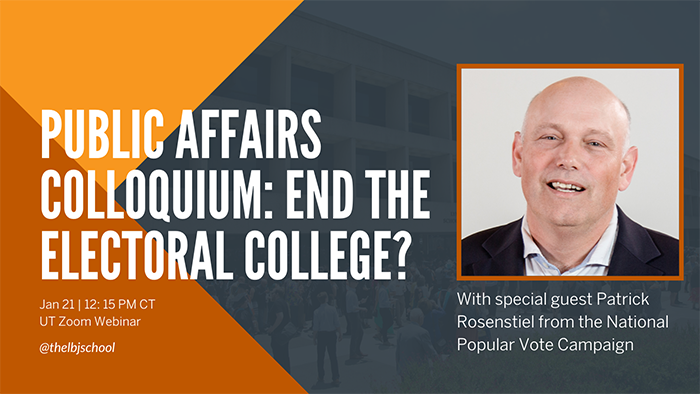 For decades, polls have shown that a majority of Americans want to replace the Electoral College with direct election of the president by popular vote. Yet since the election of 2000 the issue has become partisan, so that a constitutional amendment would be unlikely to get the necessary supermajority in Congress. The National Popular Vote campaign is an effort to make the Electoral College obsolete without a constitutional amendment, by getting a critical mass of states to agree to allocate their Electoral College votes to the winner of the national popular vote.

At the LBJ Colloquium on Jan. 21, Patrick Rosenstiel, a senior consultant to National Popular Vote, will discuss the organization's history, strategy and prospects. LBJ Professor of Public Affairs Paul von Hippel will moderate the conversation.

Rosenstiel presently serves as senior consultant to the National Popular Vote campaign. As CEO of Ainsley Shea, a Twin Cities-based public affairs firm with a worldwide impact, he is a nationally recognized figure on the topic of national popular vote. He has deep experience in the world of public affairs, international relations, public relations and market research. Having cut his teeth in the campaign world, including the Forbes for President campaign, he brings nearly two decades of senior-level public affairs expertise to the table.

As a media relations professional, Rosenstiel has placed his clients in the Washington Post, Fox News, the New York Times, Business 2.0 and the Wall Street Journal, as well as hundreds of regional, broadcast, local and trade media relevant to the geo-specific needs of the client.