An ongoing Policy Research Project (PRP) led by LBJ Professor Stephen B. Slick is examining foreign threats to U.S. election integrity and how the federal government has responded. Its recommendations for safeguarding against future interference will go to the Office of the Director of National Intelligence.

A PRP this fall by LBJ Professor Stephen B. Slick is taking a fresh look at one of the most significant dangers to American democracy in recent history: efforts by foreign states to influence and damage the integrity of U.S. elections. Slick and his students are assessing efforts by Russia and other states in 2016 and examining how the federal government responded to counteract similar attempts in 2018 and 2020.

Students are digging deep into investigative reports and policy papers, meeting with expert guests and interviewing current and former officeholders to learn about U.S. national security structures and the intelligence community from the inside, as well as to learn how influence operations and other nations' security services work.

Working in collaboration with Nicholas Rasmussen, an Intelligence Studies Project (ISP) Senior Fellow who serves as the director of the Global Internet Forum to Counter Terrorism, Slick and his students will draft a final report to counterparts at Office of the Director of National Intelligence that includes recommendations to defend against future attempts to influence elections. In recent weeks, students have met and interviewed Rasmussen, Obama administration cyber "Czar" Michael Daniel and former CIA Director John Brennan, a UT senior fellow.

Slick, director of UT's Intelligence Studies Project (ISP) and a 28-year veteran of the CIA's clandestine service, talked to us about foreign election interference, the conditions that make influence operations more likely to succeed, and the goals of this PRP. One of his students, Jeremy Workman (MGPS), also told us about his work on the project.

LBJ: Your Policy Research Project this fall focuses on threats to U.S. election integrity by foreign states and counter measures by the U.S. federal government. Have there been other attempts to influence American elections in the past?

Slick: While Americans are correctly focused on the disturbing actions by the Russian government aimed at influencing our 2016 presidential election, foreign election interference has much deeper roots. In fact, several of the first readings and class discussions in our PRP focused on the long history of political interference against sovereign states. We reviewed multiple examples by both the Soviet Union and the United States during the Cold War where the superpowers used their security services to shape the outcome of important political debates in third countries. Indeed, America's allies have also sought to covertly influence American political decision-making. The UK undertook a broad range of secret operations in the U.S. to ensure we would enter World War II on behalf of the allies.

LBJ: Jeremy, what appealed to you about this PRP? Why did you want to spend an academic year studying election interference?

Workman: This PRP appealed to me because election interference, and influence/information operations are not new, but the methods in which they are carried out have evolved due to the ever-growing cyber domain. 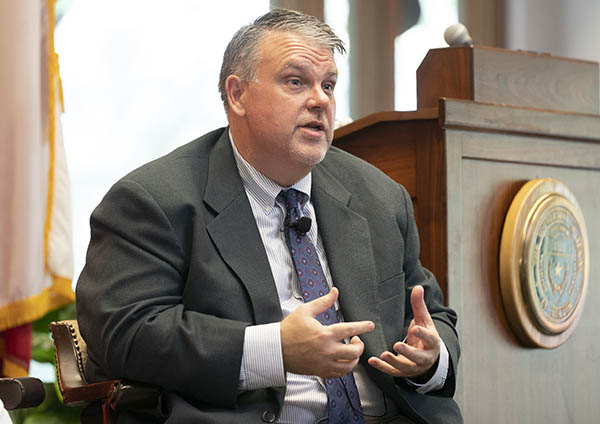 Intelligence Studies Project Senior Fellow Nicholas Rasmussen during the "Counterterrorism Since 9/11" on Sept. 10, 2019.

LBJ: Based on reporting, how successful were the counter efforts in 2018 and 2020?

Slick: Our government learned a number of lessons from the 2016 election that enabled it to be more effective in countering covert attempts to influence the 2018 midterm and the 2020 presidential election. Our PRP extensively studied the investigations and reports by former FBI Director Robert Mueller and the Senate Select Committee on Intelligence. While no legislation resulted from these reports and the experience in 2016, it's apparent that the Intelligence Community, the FBI and the Department of Homeland Security, as well as the leading social media platforms, all took important steps to anticipate and disrupt foreign efforts to influence the elections.

LBJ: The unclassified assessment by the Office of the Director of National Intelligence predicts that operations by foreign governments to influence American elections will persist in the future. What was it about the 2016 election that allowed the interference to succeed?

Slick: It's important to recognize that the most authoritative inquiries into the 2016 election confirmed that the Russian security services hacked into a number of state election offices and disseminated divisive themes to many Americans. There is, however, no compelling evidence that any votes were tampered with or indeed that the Russian information operations influenced the outcome of the election. The PRP is examining, based on the written record and personal interviews with key participants, why the Russian operations were not detected sooner and why the administration did not react more forcefully after the probing of state election offices and extreme social media personas were linked to the Russian government. We will also examine closely why this information was not shared more explicitly with American voters before the November election.

"A realistic goal is that foreign covert operations never achieve the scope and scale that they shape the outcome of an election. Our PRP will aim to generate useful recommendations to address this enduring threat and share these with our clients in the Office of the Director of National Intelligence." —Professor Stephen B. Slick

LBJ: American democracy is no a stranger to bitter and destructive partisanship or societal disagreement. What about our current climate makes these so dangerous to democratic institutions?

Slick: While the Russian security services and their hired trolls did attempt to hinder the campaign of Secretary Clinton and boost the electoral prospects of then-candidate Trump, much of the Russian social media activity was simply designed to exacerbate tensions in American society and to encourage intolerance and extreme views. The Russians did not create these societal divisions but they exploited them as part of a longstanding global campaign to discredit democracy. Russian President Putin is anxious to deflect criticism of his own authoritarian rule by demonstrating that democracies are equally unfair and disorderly. There will be tactical steps we can recommend that may allow the government to more effectively detect and disrupt future election interference but a more durable, strategic response must include elevated civil discourse and more consensual politics.

LBJ: How big a role does social media play in the spread of disinformation, and what responsibilities do these companies have to curtail it? What countermeasures can be taken?

Slick: It is becoming increasingly clear that the business models of the major social media firms produce both positive and negative societal outcomes. These firms responded to the revelations about foreign interference in the 2016 election by taking voluntary steps to monitor and remove malign foreign content, and also to exchange information more quickly and completely with government agencies. It is unclear whether these steps will prove adequate or if new laws and regulations will impose a greater responsibility on this industry to ensure the integrity of political (and other) communications.

LBJ: Jeremy, tell us a little bit about the work you’ve been doing on this project.

Workman: So far, we have primarily conducted background research of the available literature. Though our focus is on election interference, which Russia has previously had a large part in, we have also conducted research into other adversaries' operations such as Iran and China. We have also spent time looking into grey-zone tactics, misinformation and disinformation techniques, and organizational structures of various departments and agencies within the U.S. government such as the ODNI, CIA, FBI, DHS and DOD. 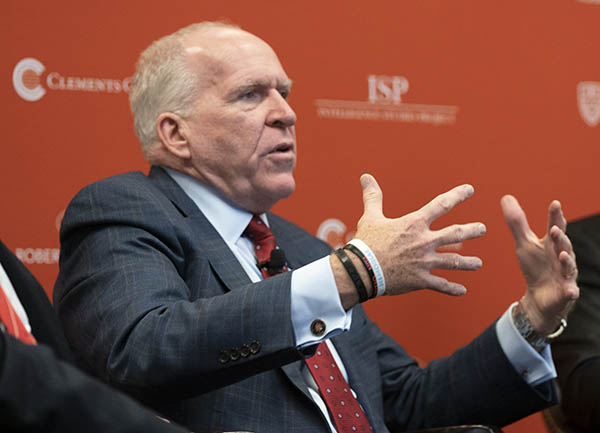 LBJ: Why were intelligence findings about election interference treated with such skepticism?

Slick: In my view, it is less a matter of the public being skeptical about foreign operations to influence our elections than the fact that the federal government did not adequately warn voters that such efforts were underway and advise steps they could take to ensure they were not being misinformed on key issues. In this regard, it is vital that the Intelligence Community maintains its ethos of generating nonpartisan assessments and that public confidence in the IC’s objectivity and competence remains high.

"The thing I enjoy most about this PRP is that it feels important. Election interference undermines our democracy and sows discord in our society. Therefore, finding solutions to mitigate it in the future is crucial." —MGPS student Jeremy Workman

LBJ: Can future elections truly be safeguarded against foreign influence?

Slick: It would be unrealistic to assume that foreign-sourced information and money can ever be totally removed from American politics. It is, though, reasonable for voters to expect that our Intelligence Community will be focused on the threat and prepared to inform senior political leaders of the nature of such attempts and to work with other executive branch agencies to disrupt them.

A realistic goal is that foreign covert operations never achieve the scope and scale that they shape the outcome of an election. Our PRP will aim to generate useful recommendations to address this enduring threat and share these with our clients in the Office of the Director of National Intelligence.

LBJ: How does it feel to know that your recommendations could end up implemented at the federal level?

Workman: Very empowering! Several very smart and talented people have conducted research on this topic, but as our client said, "It is helpful to have a fresh set of eyes on the subject, and we can provide an important perspective from outside the bureaucracy of the U.S. government."

The thing I enjoy most about this PRP is that it feels important. Election interference undermines our democracy and sows discord in our society. Therefore, finding solutions to mitigate it in the future is crucial.