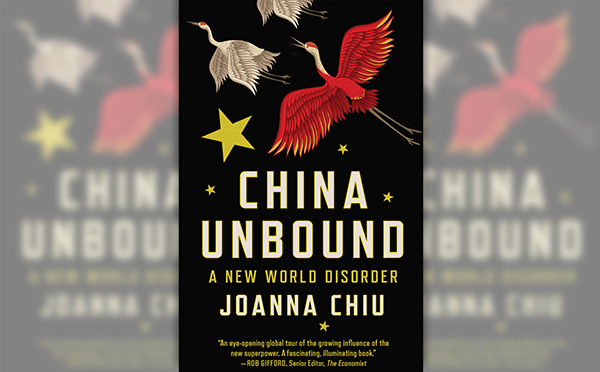 As the second-largest economy, China is now extending its influence across the globe. Chiu has spent a decade tracking China's propulsive rise, from the complicity of democratic nations, to a new colonialism coming from its multibillion-dollar "New Silk Road" initiative, to its growing sway on foreign countries and multilateral institutions. Chiu transports readers to protests in Hong Kong, underground churches in Beijing, and exile Uighur communities in Turkey, exposing Beijing's use of high-tech police surveillance and aggressive human rights violations against those who challenge its power. With increasingly close ties between authoritarian states, the new world order documented in China Unbound lays out the disturbing implications for prosperity and freedom everywhere.

Registration required. Please note: You must have a registered Zoom account to be able to register and log in.

Joanna Chiu is a senior journalist for the Toronto Star, Canada's largest newspaper, and has previously served as bureau chief of the Star Vancouver. As a globally recognized authority on China, the author of China Unbound regularly provides nuanced and deeply informed analysis for international broadcast media including CBC, BBC World, Al Jazeera and NPR. Chiu was previously based for seven years in Beijing and in Hong Kong as a foreign correspondent, including for Agence France Presse (AFP) specializing in coverage of Chinese politics, economy and legal affairs for one of the world's biggest news operations. She was the lead author of multiple research reports on China's social media and online censorship systems, such as Forbidden Feeds.

Chiu has also served as China and Mongolia correspondent for the top German news agency Deutsche Presse-Agentur, and in Hong Kong, she reported for the South China Morning Post, The Economist and The Associated Press. As a leader and connector within the global China experts' community, she is the founder and chair of the NüVoices editorial collective, which celebrates the creative and academic work of women working on the subject of China.

For more information on this event, contact Caroline Nicholson: caroline.nicholson@austin.utexas.edu.