Research from the LBJ School informs Raise the Age bill 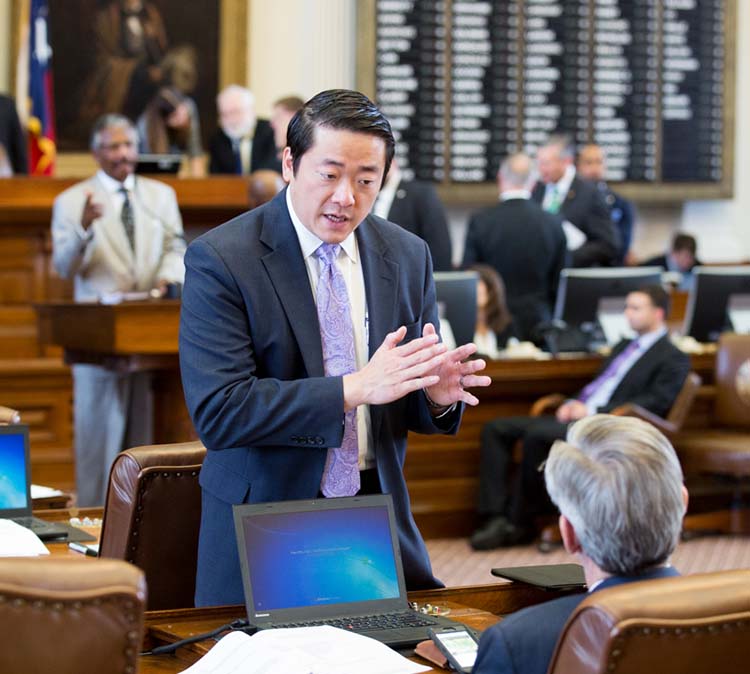 On Thursday, April 20, in an unprecedented move that could change a 100-year-old law, the Texas House passed a bill that would raise the age of criminal responsibility from 17 to 18 years old.

"This legislation is my singular priority because it is the most important change to our criminal justice system that we have done in five decades," said Texas State Representative and LBJ School alumnus Gene Wu (D–137) who is a joint author on the bill.

Under current law, charged 17-year-olds are tried as adults, regardless of whether they are charged with shoplifting or murder. Under this proposed bill, known as Raise the Age, 17-year-olds would be kept in the juvenile justice system, where they would have access to age-appropriate services and programs and be kept safe from adult inmates.

"Every year, over 20,000 17-year-olds are arrested in Texas. These kids can wind up in adult jails and prisons," said Alyssa Perez-Morrison, an LBJ School student (MPAff '17) and a criminal justice and juvenile justice policy analyst for Rep. Wu. "Ninety-five percent of these kids have committed low-level, nonviolent offenses, which means they are being arrested for things like possession of marijuana or shoplifting."

Youth incarcerated in the adult system face increased risks of suicide and sexual assault, whereas youth who stay in the juvenile justice system have better outcomes and lower recidivism, she continued.

"I took every class offered with Professor Deitch. She has been integral in developing my knowledge of a myriad of criminal and juvenile justice issues, and especially Raise the Age." —Alyssa Perez-Morrison (MPAff '17)

"The juvenile justice system — thanks to the hard work of House members and Sen. Whitmire — is one of the best and most efficient systems in the nation," Wu said. "As an attorney who represents juveniles in court, I have seen the professionalism and work ethic to make sure kids never commit another crime, and this is borne out in the statistics. Seventeen-year-olds who are treated and punished in our juvenile justice system are one-third less likely to ever commit another offense in their life. Think about the numbers, the savings to our state and counties."

Perez-Morrison came to the LBJ School with a strong interest in mass incarceration and criminal justice reform.

"I took every class offered with Professor Deitch," she said. "She has been integral in developing my knowledge of a myriad of criminal and juvenile justice issues, and especially Raise the Age. The Raise the Age movement in Texas was largely based on her report on the issue and her leadership in juvenile justice reform."

Perez-Morrison is referring to Michele Deitch, a Soros Senior Justice Fellow who holds a joint appointment with the LBJ School and the UT School of Law. Deitch's areas of specialty include independent oversight of correctional institutions, prison conditions, the management of youths in custody and juveniles in the adult criminal justice system. She is also an attorney with more than 30 years of experience working on criminal justice and juvenile justice policy issues.

"The Raise the Age initiative started in Texas when I began work in 2011 with a couple of students in my juvenile justice policy class, Rebecca Breeden and Ross Weingarten, on a project to assess the operational and fiscal impact of potentially raising the age of criminal responsibility," Deitch said. "No one in Texas was talking about that issue at the time, and so this was a bit of an exploratory study."

Deitch said their work indicated that raising the age was both a viable and sensible proposal, and they published their research in the American Journal of Criminal Law in 2012 (Editor's note: Numbers and data in the article have since been updated). Lawmakers took notice, and from 2013 to 2014, Deitch and a team of LBJ School students worked closely with the House Criminal Jurisprudence Committee on a number of juvenile justice-related interim charges, including Raise the Age, as part of a Policy Research Project.

"A team of my LBJ students—Andi Gentile, Miguel Liscano and Jennifer Lucy—updated the previous research, produced more materials for the committee, held focus groups with stakeholders and helped organize an all-day Committee hearing on this topic," Deitch said. "I was honored to be asked to provide the lead testimony at the hearing. The hearing resulted in a great deal of media attention and support for the raise the age issue, and ultimately, the committee endorsed the proposal to raise the age in its interim report."

Deitch said the proposal gained momentum, and she was asked to provide legislative briefings and speak to stakeholder groups about Raise the Age.

"During the 2015 legislative session, five bills were filed to raise the age, and the bill was voted out of the House Juvenile Justice and Family Issues Committee, where I once again gave in-depth testimony about the bill," Deitch said.

Many of Deitch's students had the opportunity to work on this issue while they were in criminal justice placements in legislative offices.

"Beyond providing detailed analysis and expertise, the LBJ School also provided assistance unmatched by any other organization. These graduate students at the LBJ School brought a depth of understanding and passion that is rarely seen at the Capitol. It was their hard work and persistence that allowed me to manage so many complex bills and issues." —Rep. Gene Wu (MPAff '04)

"They had a front row seat as they watched the policy development process play out on an issue that they had worked on closely through my course," Deitch said.

The bill did not pass the legislative process in the last session, however.

"Now one session later, the bill is back again, with even more support and momentum than last time," Deitch observed. "Once again, several of my amazing students are working at the Legislature, and a couple of them — Alyssa Morrison and Lucy Kellison — are working in the offices of the authors of the Raise the Age bill (Rep. Wu and Rep. Dutton). So the LBJ School has continued to play a role in informing the policy development process surrounding the Raise the Age initiative."

"Beyond providing detailed analysis and expertise, the LBJ School also provided assistance unmatched by any other organization," Wu said. "For the past two sessions, the LBJ School, through Professor Michele Deitch, has provided our office with graduate level interns to help specifically on criminal justice issues. These graduate students at the LBJ School brought a depth of understanding and passion that is rarely seen at the Capitol. It was their hard work and persistence that allowed me to manage so many complex bills and issues. Simply put, we would never be this close to completing our goal without Professor Deitch's guidance or the hard work by Alyssa Morrison and Andi Gentile. When Raise the Age is finally signed into law in Texas, we will owe them a debt of gratitude for their many contributions."

"[Students] had a front-row seat as they watched the policy development process play out on an issue that they had worked on closely through my course." —Michele Deitch

Perez-Morrison credits Deitch for her understanding of and passion for the issue.

"My baseline understanding of the issue came from her [Deitch's] juvenile justice policy course. I also credit her for my ongoing passion for the issues and my ability to understand the policies which affect them," she said. "It was an invaluable experience to gain practice writing policy memos and issue briefs for her class on the very topics I would become immersed in through my roles at the Texas Criminal Justice Coalition (Editor's note: Perez-Morrison's role at the Texas Criminal Justice Coalition was secured outside of Deitch's class) and the Legislature. The LBJ School and Professor Deitch have provided me with incredible opportunities to gain knowledge and experience in my area of interest."

The bill will now move to the Texas Senate, where it will be referred to a committee for hearing. If the bill is successfully voted out of committee, it will then be debated on the Senate floor. If the version that comes out of the Senate is the same as the House version, the bill will be sent to Gov. Abbot for his signature. Otherwise, the two versions will need to be reconciled through a conference committee.