Red Line: The Unraveling of Syria and America's Race to Destroy the Most Dangerous Arsenal in the World | LBJ School of Public Affairs | The University of Texas at Austin
Skip to main content

Red Line: The Unraveling of Syria and America's Race to Destroy the Most Dangerous Arsenal in the World 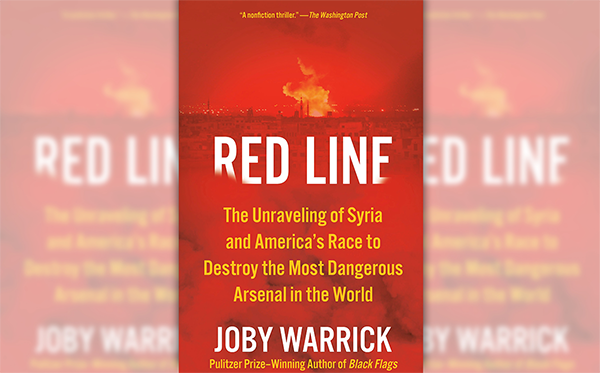 On Thursday, Feb. 24, the Clements Center for National Security and the Strauss Center for International Security and Law will host Joby Warrick, journalist for the Washington Post, for a talk on his latest release, Red Line: The Unraveling of Syria and America's Race to Destroy the Most Dangerous Arsenal in the World. Join us from 12:15 to 1:30 p.m. CT at the University of Texas in the Robert L. Patton Building, RLP 1.302B.

Joby Warrick joined the Washington Post's national staff in 1996. He has served with the Post's investigative and national security teams, and currently writes about the Middle East, terrorism and weapons proliferation. He is the author of three nonfiction books, including his 2021 book Red Line: The Unraveling of Syria and America's Race to Destroy the Most Dangerous Arsenal in the World. His second book, Black Flags: The Rise of ISIS, was awarded a 2016 Pulitzer Prize for nonfiction. His first book, The Triple Agent, recounts the 2009 suicide attack by an al-Qaeda informant on a CIA base at Khost, Afghanistan, that killed seven U.S. intelligence operatives. Before joining the Post, Warrick covered the fall of communism in Eastern Europe as a UPI correspondent and worked as a reporter at the Delaware County (Pa.) Daily Times, the Philadelphia Inquirer and the News & Observer of Raleigh, N.C. While in Raleigh, he co-wrote "Boss Hog," a series of investigative stories that documented the political and environmental fallout caused by factory farming in the Southeast. The series won the 1996 Pulitzer Prize Gold Medal for public service. His honors and Awards include the Pulitzer Prize for general nonfiction, 2016; Pulitzer Prize Gold Medal for public service, 1996; White House Correspondents Association Edgar A. Poe award, 1996; Overseas Press Club of America Bob Considine Award for best newspaper interpretation of international affairs, 2003.

For more information on this event, contact Elizabeth Doughtie: elizabeth.doughtie@utexas.edu.