George P. Mitchell and the Idea of Sustainability 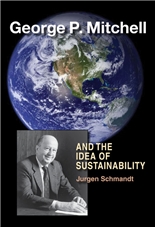 <p>An energy tycoon, real estate developer, and philanthropist, George P. Mitchell is also an idealist, a big thinker who gave his time and fortune to the study of sustainability long before it became a household word.</p>

<p>Jurgen Schmandt, who has worked for Mitchell for many years, explains and traces the idea of a sustainable society, from its origin in the eighteenth-century concept of the "commons" to its twentieth-century iteration in the 1987 United Nations report "Our Common Future." He then chronicles Mitchell’s commitment to this idea from the early 1960s, when the focus was on population growth, to today, when climate change and global warming dominate the debate.</p>

<p>Mitchell advanced his belief that humankind could create "a balance between economic and ecological well-being" by organizing and hosting conferences, awarding prizes, supporting scholars and scientists, and funding research and publications. He did it at the Aspen Institute, at The Woodlands Conferences, at the National Academy of Sciences, at the Mitchell Center for Sustainable Development, and at the Houston Advanced Research Center. (Paradoxically, he did not always do it in his own energy company.)</p>

<p>Documenting one important man’s engagement with one important idea, Schmandt has preserved a significant episode in the ongoing quest to create societies that are "capable of reaching and then sustaining a decent quality of life for their citizens."<br />
</p>