The Impact of Global Warming on Texas 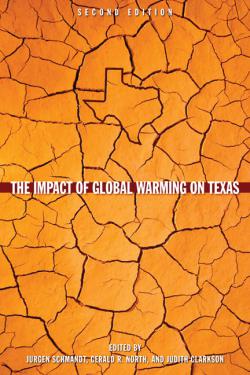 <p>When The Impact of Global Warming on Texas was first published in 1995, it discussed climate change as a likely future phenomenon, predicted by scientific studies. This entirely rewritten second edition presents evidence that early climate change impacts can now be observed and identifies the threats climate change will pose to Texas through the year 2050. It also offers the hopeful message that corrective action, if taken now, can avert unmanageable consequences.</p>

<p>The book begins with a discussion of climate science and modeling and the information that can be derived from these sources for Texas. The authors follow this with an analysis of actual climate trends in the various Texas climate regions, including a predicted rise in temperatures of 5.4 degrees F (plus or minus 1.8 F) by the end of the century. This could lead to less rainfall and higher evaporation, especially in regions that are already dry. Other important effects include possible changes in El Niño (climate variability) patterns and hurricane behaviors. Taking into account projected population growth, subsequent chapters explore likely trends with respect to water availability, coastal impacts, and biodiversity.</p>

<p>The authors then look at the issues from a policy perspective, focusing on Texas's importance to the national economy as an energy producer, particularly of oil and gas. They recommend that Texas develop its own climate change policy to serve the goals of reducing greenhouse gas emissions, increasing energy independence, ensuring regional security, and improving management of water, air, land, and wildlife.</p>