Perspectives on Politics
Garcia-Rios, Sergio I 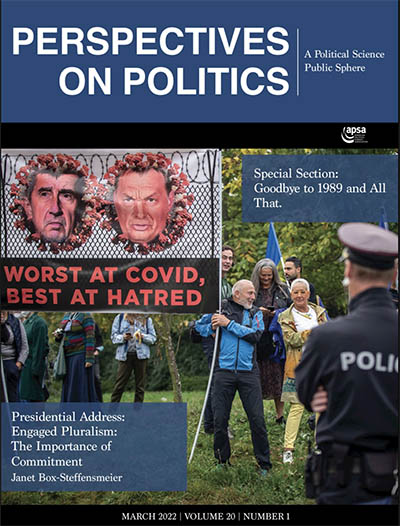 How do involuntary interactions with authoritarian institutions shape political engagement? The policy feedback literature suggests that interactions with authoritarian policies undercut political participation. However, research in racial and ethnic politics offers reason to believe that these experiences may increase citizens' engagement. Drawing on group attachment and discrimination research, we argue that mobilization is contingent on individuals' political psychological state. Relative to their counterparts, individuals with a politicized group identity will display higher odds of political engagement when exposed to authoritarian institutions. To evaluate our theory, we draw on the 2016 Collaborative Multiracial Post-Election Study to examine the experiences of Blacks, Latinos, and Asian Americans. For all subgroups and different types of institutions, we find that, for those with a politicized group identity, institutional contact is associated with higher odds of participation. Our research modifies the classic policy feedback framework, which neglects group-based narratives in the calculus of collective action.

In 2017, more than seven million households relied on some form of subsidized housing (Kingsley 2017). The rate of children involved in the child welfare system was 6 per 1,000 children in the population, and Black children were overrepresented (Databank 2019). In 2018, more than three million Americans received cash transfers through national or state programs (Office of Family Assistance 2018). At the end of 2016, four and a half million individuals were on probation or parole at the end of 2016, and nearly 30% of working-age adults had a criminal record (Friedman 2015; Kaeble 2018).

Thus, contact with public institutions is pervasive, particularly with those institutions that scholars characterize as authoritarian or paternal (Soss et al. 2011). Public institutions impart civic lessons to clients, serving "as sources of information and meaning, with implications for political learning" (Mettler and Soss 2004, 60). Interactions with public policies and actors send messages about the value of one's civic voice and standing in the polity (Lerman and Weaver 2014; Maltby 2017; Mettler 2005; Rocha, Knoll, and Wrinkle 2015; Soss 1999). Authoritarian or paternal policies, whose reach is extensive, have extraordinary consequences for U.S. democracy by the lessons they teach and the citizens they make (Justice and Meares 2014; Lerman and Weaver 2014; Meares 2016).

Yet how do involuntary interactions with authoritarian institutions shape political engagement? Are citizens similarly affected by these interactions, or do responses vary by race? Policy feedback scholars answer the first question by examining a policy's impact on an individual's material and attitudinal resources, such as political efficacy and trust in government (Campbell 2002; Lerman and Weaver 2014; Mettler 2002; Michener 2018; Soss 1999). Such scholarship places institutional structure at the center of questions of engagement, distinguishing between those that empower individuals, encourage collective action, and engender efficacy and, alternatively, those that disempower and impede the development of civic capacity. Democratic policies that provide goods and services without excessive conditions and encourage participation in policy structure and implementation enable engagement and confidence in one's role in the political milieu (Mettler and Soss 2004; Soss and Jacobs 2009). In contrast, interactions with authoritarian or paternal policies—characterized by top-down implementation, behavioral monitoring, and sanctions—degrade civic trust and capacity (Ryo 2016) and undermine participation (Lerman and Weaver 2014; Maltby 2017; Soss 1999).

Yet, although feedback scholars "study processes that are shot through with racial implications," they often do so "without enough theoretically grounded consideration of race" (Michener 2019, 444). Indeed, research on minority participation offers reasons to believe that experiences with authoritarian policies may increase—rather than decrease—engagement. This work finds that individuals mobilize in defense of their rights when they believe they have been treated unfairly on account of their race, ethnicity, or other group affiliation (Miller et al. 1981; Parker 2009; Shingles 1981). A politicized group identity that views the state as a source of persistent inequality helps cultivate positive self-efficacy that encourages involvement in defending one's rights and enhancing the status of one's group. Some findings within the feedback literature support this idea. Soss (2005) highlights the response of some of the AFDC recipients he interviewed: they leveraged their sympathetic status as mothers toward a collective consciousness, rejecting the stigma associated with welfare receipt. In her study of the feedback effects of Medicaid, Michener (2018) notes what she terms particular resistance among beneficiaries who act to defend threatened services. Both authors direct policy feedback scholars to further examine the conditions that foster an embrace of political agency. Soss (2005, 322) explicitly directs us toward a dialogue with political psychology, writing that "a true dialogue with political psychology … remains an unrealized, and, to my mind, crucial goal for research on target groups." In subsequent work, Michener (2019) provides a framework for understanding how and when we should explicitly engage racial and ethnic politics research.

We take up these scholars' calls, both to examine the conditions under which individuals contest authoritarian policies and to bring racial and ethnic politics research into conversation with policy feedback theory. We argue that interactions with authoritarian institutions can be mobilizing when individuals hold a politicized group identity to which they connect their experience. Our central claim, then, is that a politicized group identity is an important fault line in determining whether authoritarian policies assist or attenuate participation. Thus, our theory should hold across a variety of authoritarian institutions. Finally, we examine how these relationships vary across racial subgroups. Although group consciousness is most coherent for Black Americans (Dawson 1994; Watts Smith, Lopez Bunyasi, and Smith 2019) and Latinos (Sanchez 2006; Zepeda-Millán 2017), research increasingly demonstrates that a group-based identity also can have meaningful political consequences for Asian Americans (Le, Arora, and Stout 2020; Wong, Lien, and Conway 2005). Thus, although race structures the nature of interactions with authoritarian policies and influences the likelihood of holding a politicized group identity, individuals who hold such an identity will be mobilized regardless of race.

Our research makes several contributions. Heeding Soss (2005) and Michener (2019), we engage research on the political psychology of race to address a classic question about political learning. As such, we develop an alternative set of expectations for behavioral outcomes than would follow from the policy feedback literature, thus modifying the framework. Emerging work has taken initial steps to theorize about the mobilizing capacity of criminal justice (Walker 2020), but existing theory and evidence provide reason to think criminal justice is exceptional (Schneider and Ingram 1993). We argue that the logic of mobilization should extend to a class of related authoritarian institutions. Finally, very little feedback research examines differences among racial subgroups, and the handful of studies that do limit institutional variation. Yet, minorities in the United States interact with myriad institutions that cumulatively contribute to the daily experience of racialization, resulting in a particular kind of politics.

Taken as a whole, policy feedback scholarship suggests little capacity among citizens to mobilize in response to authoritarian policies. This perspective obscures important instances of collective action among minorities in the United States to counter state oppression. Drawing on the wealth of knowledge around racial and ethnic politics, we centralize the agency of the marginalized and offer alternative expectations for scholars leveraging policy feedback theory. We conclude the article with a discussion of our findings and a plan for future research.