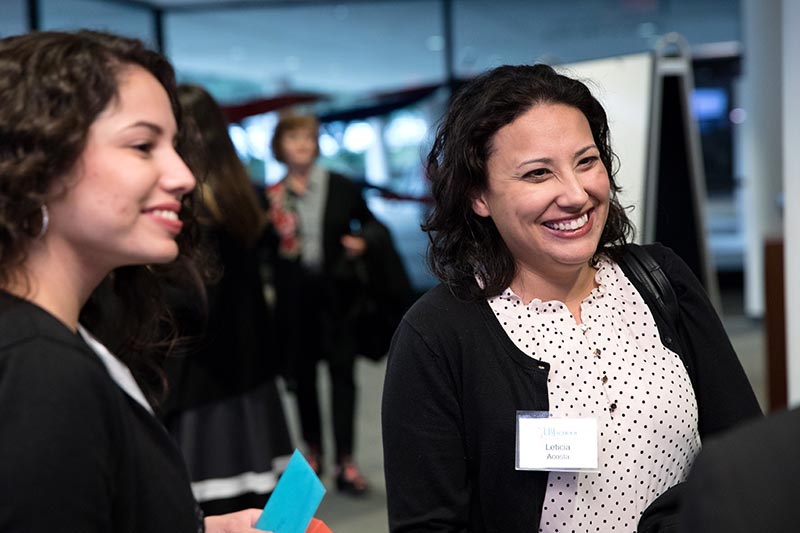 On Feb. 21, the LBJ School and the LBJ Alumni Board recognized three outstanding LBJ alumni with the 2017 Distinguished Public Service Award (DPSA) and Rising Leader Awards. Recipients were honored at a reception and awards ceremony at the LBJ School of Public Affairs, which brought together LBJ alumni, students and friends of the school. 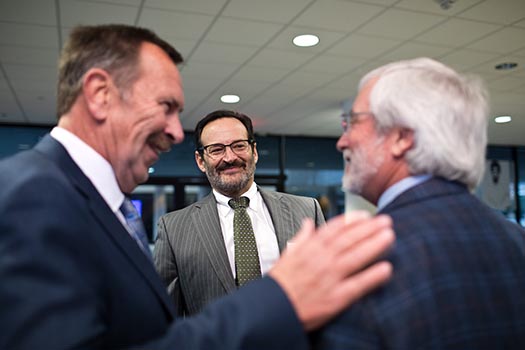 The DPSA, established by the LBJ Alumni Board in 1989, is presented each year to an LBJ alumnus whose career and public service record best represent the values on which the school was founded. The 2017 honoree is Mark Zion (MPAff ’80). 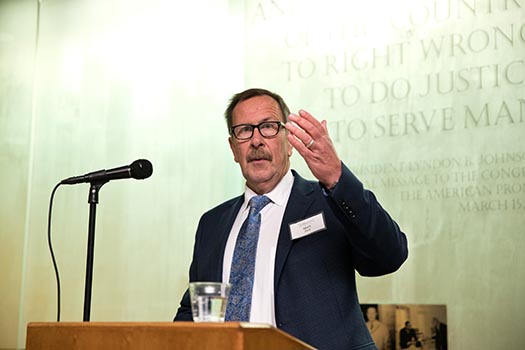 Zion has been part of the electric utility industry for over 30 years. He retired in 2016 after 20 years as the executive director of the Texas Public Power Association (TPPA), a statewide organization which represents municipal electric utilities, river authorities and other consumer-owned electricity providers. As chief executive of TPPA, he was responsible for convening and leading teams of public power professionals to effectively address key industry, community and public-policy issues. An acknowledged expert on electric utilities and public decision-making, Zion has advised public and private sector entities on energy issues and has represented Texas municipally owned electric units at the state and federal levels. He led diverse coalitions in enacting a wide range of legislation benefitting the state’s economy, its residents and its environment. He currently consults on energy and public policy.

The newly created Rising Leader Award recognizes younger LBJ alumni who have stood out as leaders and catalysts for change and who have made a meaningful difference to individuals, organizations or governments. Matthew Randazzo (MPAff ’03) and Vanessa Stotts (MPAff ’13) have been named the inaugural recipients of the award. 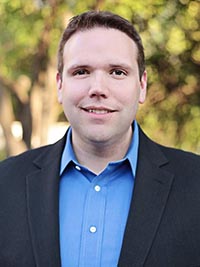 Randazzo, who was unable to attend the ceremony, is currently CEO of the Dallas-based National Math and Science Initiative and was recently appointed president and CEO of The Dallas Foundation, a prominent charity that connects donors with nonprofits. Randazzo’s résumé includes leadership roles at the Junior Statesmen Foundation in Washington, DC, a nonprofit that supports student participation in public affairs. He also worked with two Texas organizations that focus on charter schools: IDEA Public Schools in the McAllen area and Choose to Succeed in San Antonio. In fall 2014, he became chief growth and strategy officer of the National Math and Science Initiative. He later was promoted to CEO of the nonprofit, which trains teachers on best practices and offers subsidies to get more kids enrolled in Advanced Placement classes. 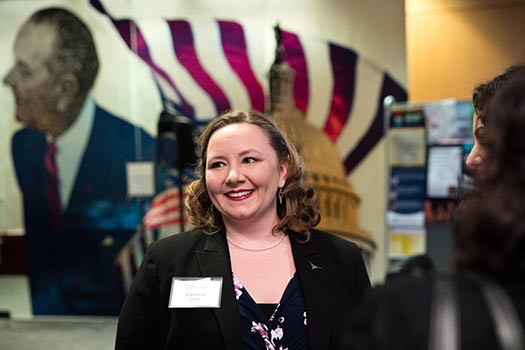 During her time at the LBJ School, Stotts worked with the Center for Politics and Governance, where she managed the daily operations and budget, as well as developed educational programs for the fellows of the center. She was also employed with Subiendo: The Academy for Rising Leaders, which seeks to train and inspire young Hispanic leaders. In 2014, she joined the U.S. Department of State as a foreign service officer. Her first assignment was with the U.S. Embassy in Uzbekistan, where she was responsible for a large staff and managed a $50 million inventory. She was assigned management responsibilities, which she fulfilled with limited support, a workforce made up of citizens of Uzbekistan, and work processes that required significant adjustment and refinement. She received two meritorious honor awards and one superior honor award from the U.S. Department of State in the two short years she served at this post. After her assignment in Uzbekistan, Vanessa returned to the U.S. State Department in Washington, DC and began in-depth studies of German to prepare her for her next assignment.

Find out more about LBJ School alumni recognition and to see a list of past award recipients.