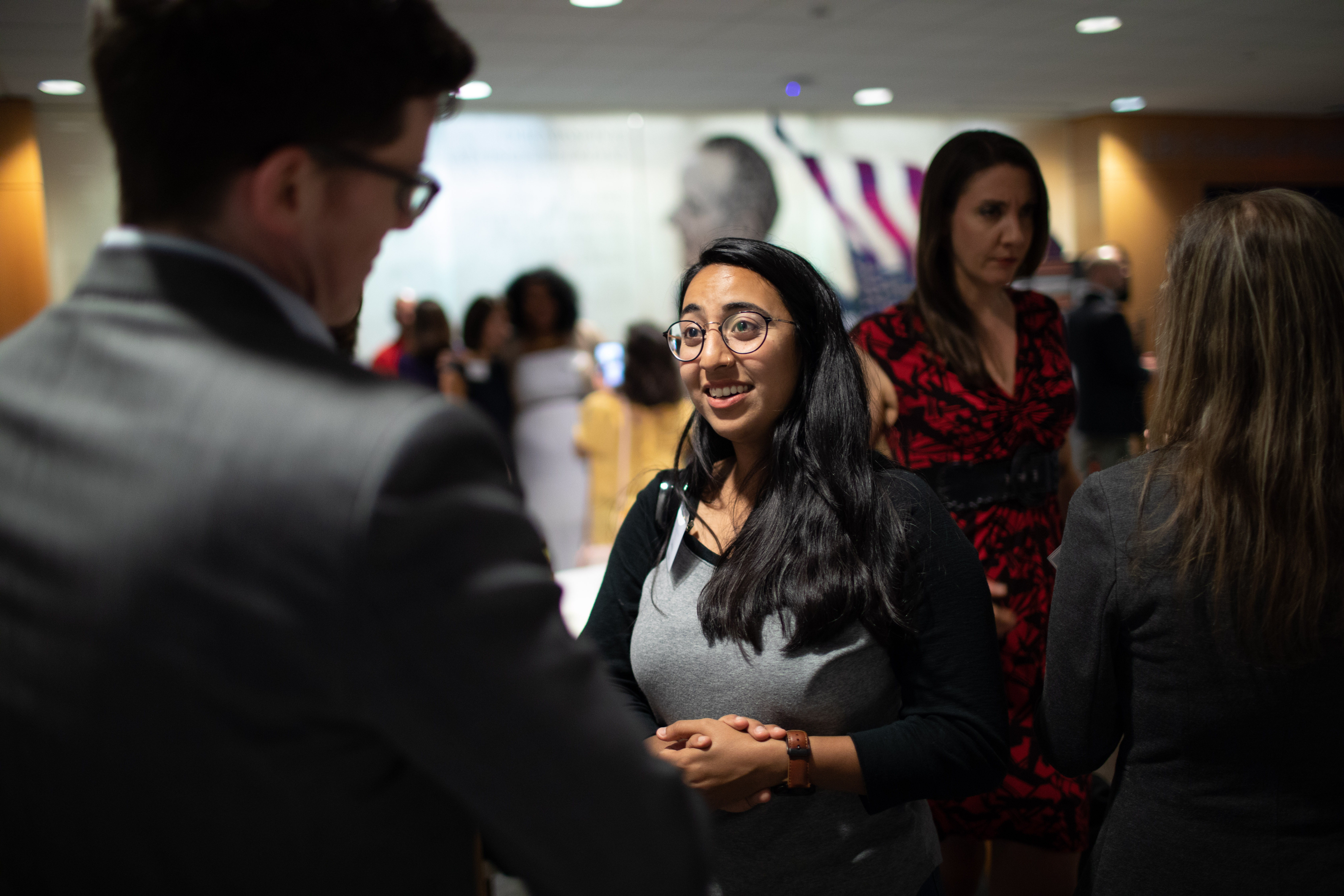 LBJ alumni, their families and friends returned to the LBJ School Sept. 14–16 for the inaugural Alumni Weekend to reconnect with former classmates, celebrate alumni excellence and engage with current students. The weekend was kicked off by the Outstanding Alumni Awards reception, honoring the 2018 winners of the Distinguished Public Service Award and Rising Leader Award: Nancy La Vigne (MPAff ’91) and Rachel Hoff (MGPS ’14). 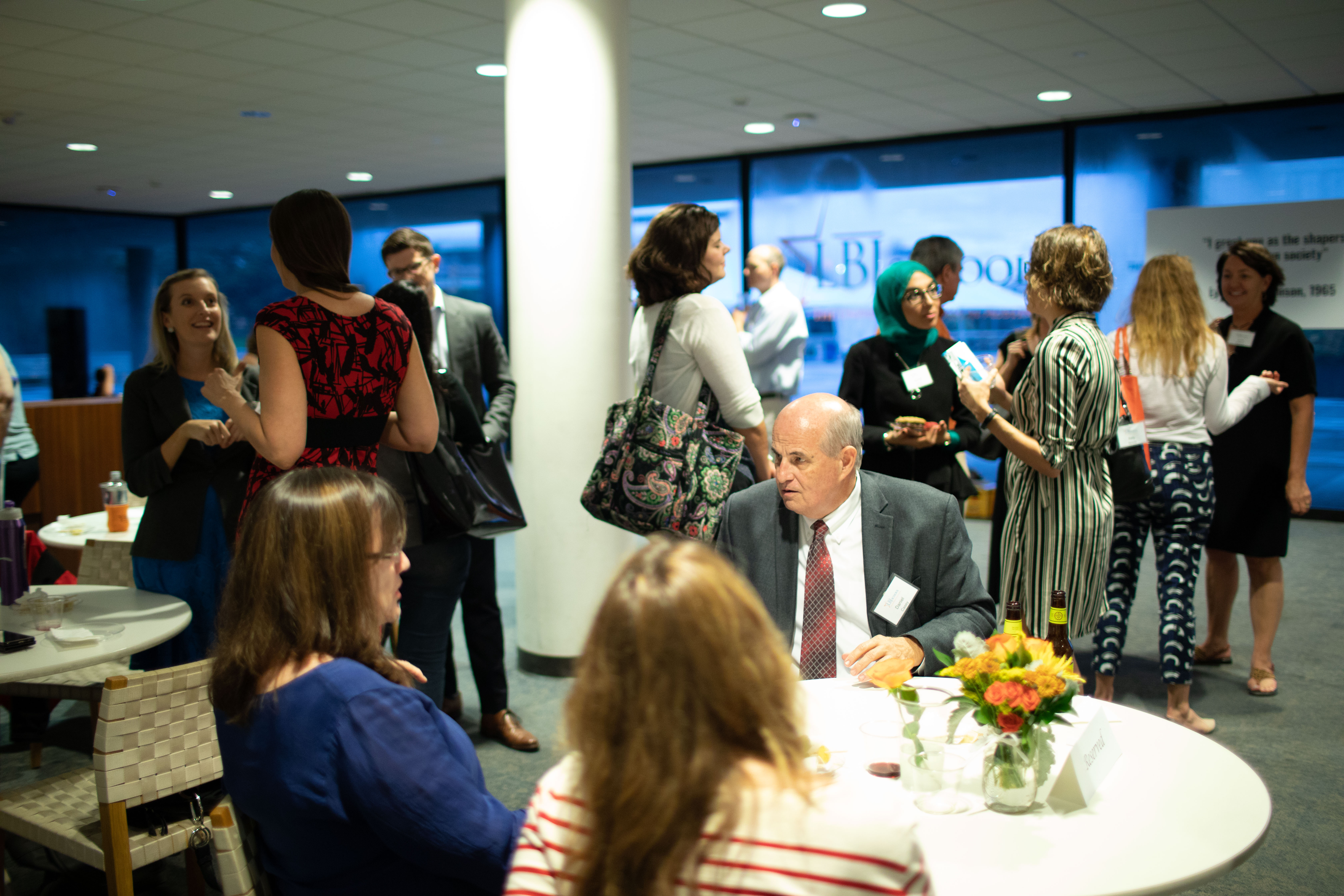 "Tonight, we will honor two outstanding alumni who embody the LBJ School spirit — a spirit of leadership, action and public service," said LBJ School Dean Angela Evans. "Much of the LBJ School's legacy is represented by the achievements of our alumni and the great extent to which their significant contributions have a meaningful impact on the individual, organizational and governmental spheres. The Distinguished Public Service Award and Rising Leader Award were designed to recognize this high level of excellence." 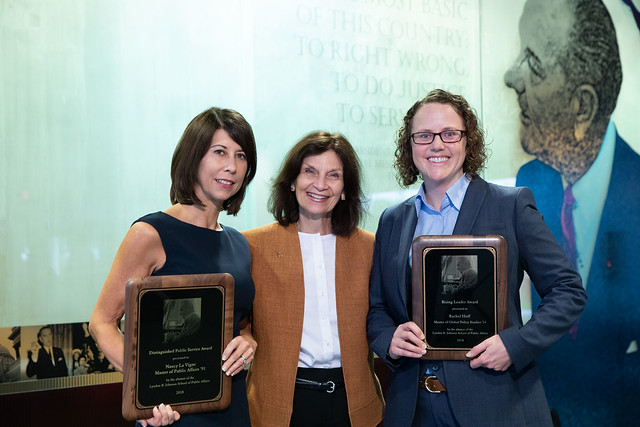 LBJ Alumni Board president Josh Levine (MPAff '12), served as master of ceremonies and spoke about the importance of public policy and the role this year's winners play in shaping its future.

"Through their achievements, we're reminded that even in politically contentious times, public policy matters," he said. "Our society is shaped by the actions and ideas of those policymakers that have the strength and willpower to tackle fundamental challenges in the pursuit of the public good. The LBJ School is a place where students do not just learn the academic elements of public policy, but are encouraged to actively and positively shape it for years to come — in the mold of President Johnson himself."

The Outstanding Alumni Award winners were nominated and selected by their peers, joining an exclusive group of LBJ alumni who share a desire to shape policy and the drive to become leaders in their field.

Jennifer Poulakidas (MPAff '91), past president of the LBJ Alumni Board, and Julia Durnan, MPAff student and policy analyst for the Urban Institute, presented the 2018 DPSA to Nancy La Vigne.

What a privilege to help present @NLVigne with the LBJ Distinguished Public Service award.

Nancy used her speech to encourage us all to use policy work to challenge the status quo & our positional power to promote equity. Perfect way to start my LBJ career! https://t.co/eZ0301V4zG 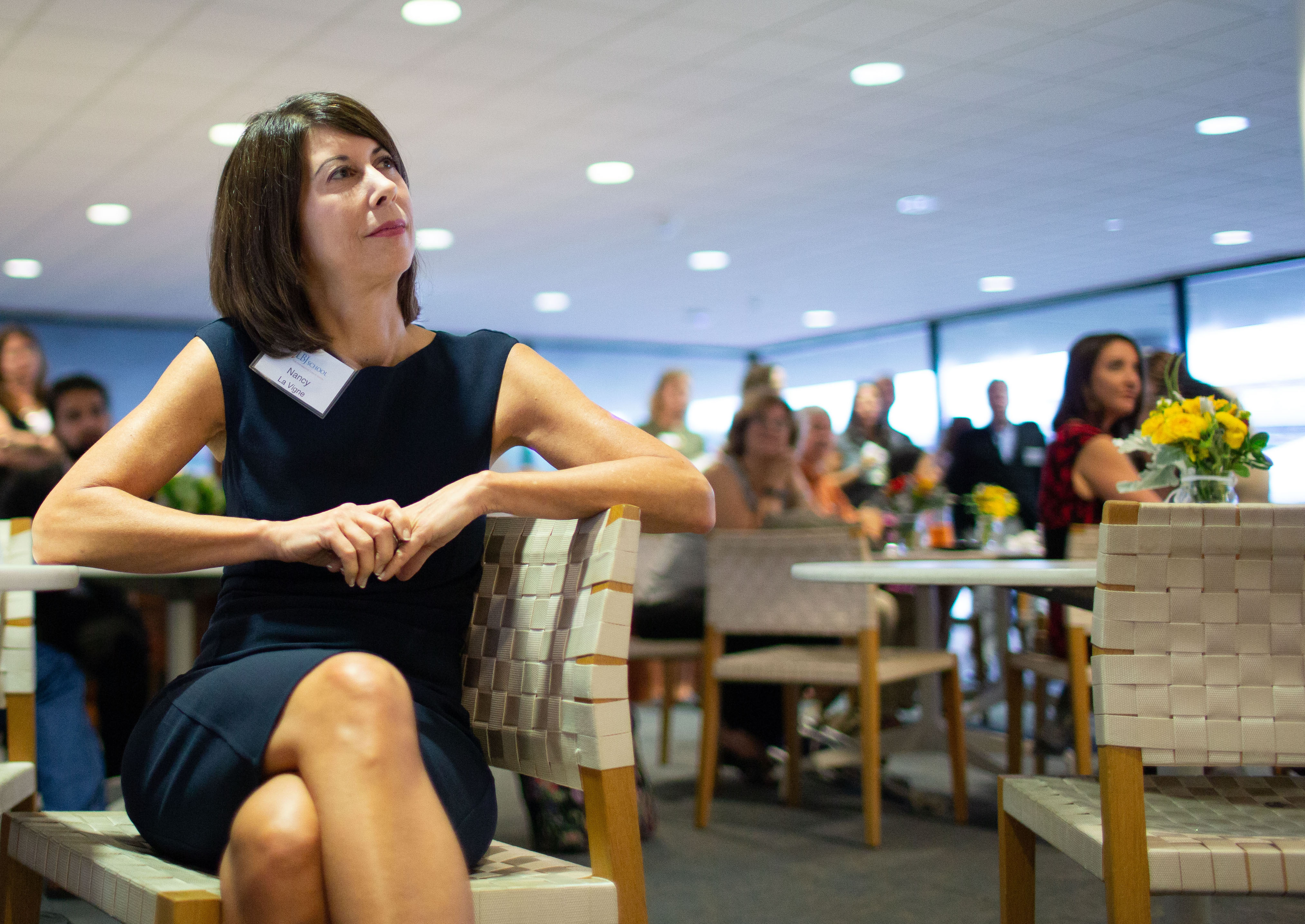 Nancy La Vigne is vice president for justice policy at the Urban Institute, where she directs the Justice Policy Center. She publishes research on prisoner re-entry, criminal justice technologies, crime prevention, policing and the spatial analysis of crime and criminal behavior. Her work appears in scholarly journals and practitioner publications and has made her a sought-after spokesperson on related subjects.

Before being appointed vice president, La Vigne was a senior research associate at the Urban Institute, directing groundbreaking research on prisoner re-entry. Previously she was founding director of the Crime Mapping Research Center at the National Institute of Justice. She later served as special assistant to the assistant attorney general for the Office of Justice Programs in the U.S. Department of Justice. She also has been a research director for the Texas sentencing commission, research fellow at the Police Executive Research Forum, and consultant to the National Council on Crime and Delinquency.

La Vigne was executive director for the bipartisan Charles Colson Task Force on Federal Corrections Reform and founding chair of the Crime and Justice Research Alliance. She served on the board of directors for the Consortium of Social Science Associations from 2015 through 2018. She has testified before Congress and has been featured on NPR and in the Atlantic, New York Times, Washington Post and Chicago Tribune.

In addition to a Master of Public Affairs from the LBJ School, she holds a Bachelor of Arts in government and economics from Smith College and a doctoral degree in criminal justice from Rutgers University.

Just touched down in Austin for UTexas LBJ School alumni reunion and was greeted by this statue of the venerable Barbara Jordan at the airport. I had the privilege of taking an ethics seminar w/ her and her teachings remain my North Star. @TheLBJSchool @LBJSchoolAlumni pic.twitter.com/OHjG4e1wcq 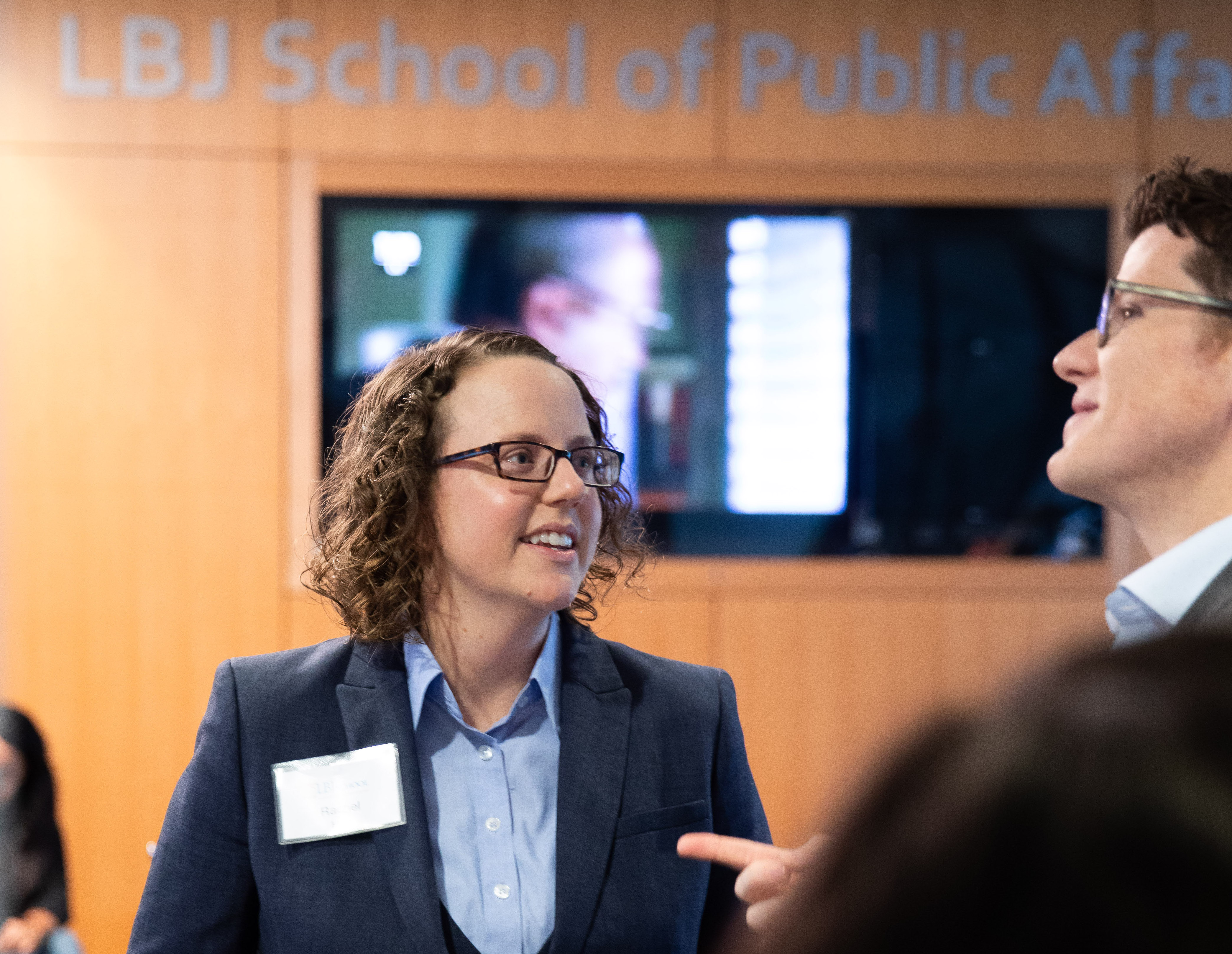 Rachel Hoff serves as communications director and policy adviser for the Senate Armed Services Committee. She previously worked in the U.S. House of Representatives for Rep. Mac Thornberry (R-Texas). She has conducted research and outreach for a number of think tanks in Washington, DC, including the American Action Forum, the American Enterprise Institute and the Foreign Policy Initiative, a think tank she helped found. She has worked and volunteered for numerous Republican campaigns and organizations and twice served as a delegate to the Republican National Convention. In 2016, she was the first openly gay member of the GOP Platform Committee.

Hoff received a Master in Global Policy Studies from the LBJ School of Public Affairs and a bachelor's degree in political science from Tufts University. She was born and raised on U.S. military bases in Tokyo, Japan.

Rachel Hoff on how LBJ prepared her for her career: "More than anything, though, it was the spirit of service that inspired both faculty and students alike that I carry with me – the desire to change the world, and the belief that you actually can." @rachelhoff814 https://t.co/w3EMfeT4wO 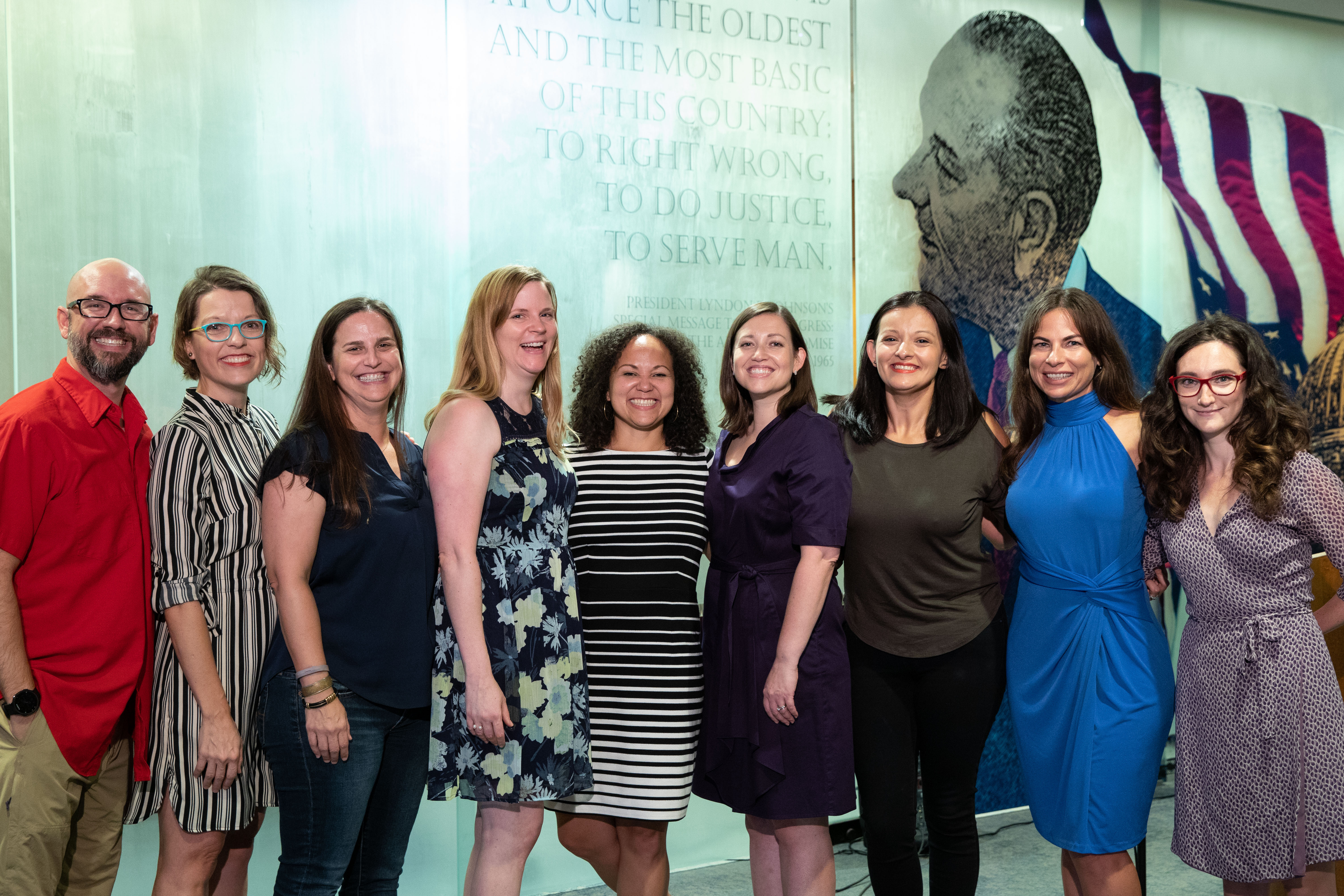 Learn more about the LBJ School Alumni Association, becoming an Alumni Board member or nominating a distinguished alumnus.