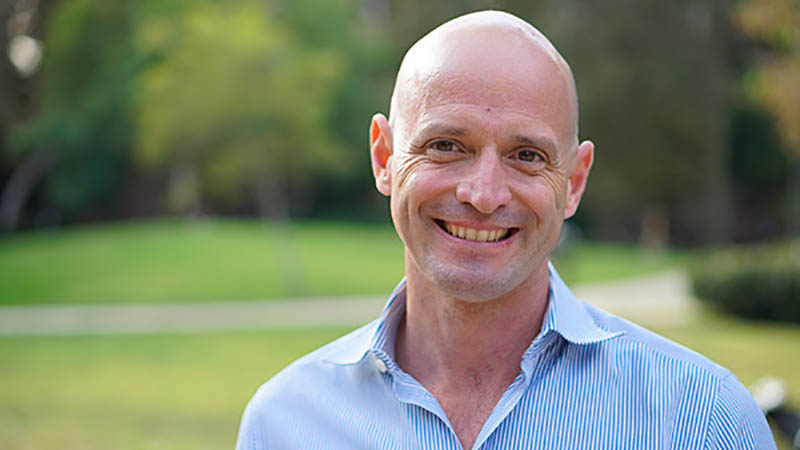 In July, The University of Texas at Austin named JR DeShazo the 12th dean of the LBJ School of Public Affairs, a school producing graduates who are both skilled policy analysts and talented leaders of public and nonprofit organizations. DeShazo comes to the Forty Acres from the University of California, Los Angeles, where he has led both the Department of Public Policy and the Luskin Center for Innovation as its founding director for more than a decade.

His work as an expert on renewable energy, clean water, environmental economics, public finance, climate change and sustainable transportation is wide-ranging and prolific (he's published more than 45 articles and has over 3,600 citations in Google Scholar) — but what else do we know about the man who is trading Dodger Dogs for breakfast tacos? Take a look.

He built one of the nation's leading environmental policy research centers.

Donors Renee and Meyer Luskin founded the Luskin Center for Innovation (LCI) in 2008 to focus on solutions to local, national and global environmental challenges. Since then, its hallmark has been to bring together UCLA scholars with civic leaders to research, advise and assess environmental policies and break new ground with evidence-based approaches to problem solving.

Under his leadership, the LCI has impacted policies on climate, renewable energy, environmental equity, zero-emission transportation, urban greening and sustainable water systems through its research, evaluation, advice and assistance. It was recognized by President Obama's Climate Data Initiative and has earned eight awards from the American Planning Association — three national and five at the state level.

He was part of a research team that won a $7.5 million XPRIZE for turning carbon dioxide into concrete.

DeShazo provided the public policy and economic guidance for the revolutionary research, which captures carbon emissions from power plants and "upcycles" them to make cement. The process traps the greenhouse gas forever, reducing by half the carbon footprint of concrete manufacture, which accounts for about 5 percent of the earth's greenhouse gas emissions. The scientific part of the interdisciplinary UCLA team was led by Gaurav Sant and colleagues in chemistry, biochemistry, materials science and engineering. A test run of the technology at a coal-fired power plant in Wyoming created more than 330,000 pounds of concrete blocks, winning the team the grand prize — the first university to win an XPRIZE of any kind.

Congrats to the UCLA team, especially @gnsant!
And a shout-out to our director @JRDeshazo and researcher @jdifilippo who provided public policy and economic guidance for this technology that turns carbon dioxide into concrete. https://t.co/3MPRjAXvXp

He made history at the College of William & Mary by being named its first Rhodes Scholar.

"As the oldest of seven children in a rural working-class family, I entered the College of William & Mary very unsure if I could pay for college," said DeShazo. "That I was able to leave as a Rhodes Scholar is due to faculty who took interest in me, and of course, publicly supported financial aid."

As he headed off to Oxford University to study development economics, DeShazo had his sights set on directing water resources management projects in developing countries — and possibly to later teach at the college level after receiving his Ph.D.

His field work and research has taken him all over the world.

As a teenager, he did volunteer relief work in Honduras and worked at the Na Bloom Center for Indians in Chiapas, Mexico. While a Ph.D. student, DeShazo conducted research for the Harvard Institute for International, which led him to field work in Romania, Guatemala, Thailand, Honduras and Israel. In these countries his research focused on improving the public finances of urban environmental services and parks.

What is the greatest challenge you have faced?

"In the second grade I was diagnosed with a learning disability," DeShazo said. "I was, and still am, a deplorable speller and not good on some sequencing tasks. I felt really dumb when confronted with tasks many people could easily do. At the same time, I truly loved to learn. In junior high, I was the only kid that I knew in both the learning disabled and the gifted and talented programs. My advice to everyone is: "Don't let what you can't do keep you from doing what you can do." (I think I stole that quote from Coach John Wooden.)

Who most influenced you?

"My high school track coach, Melvin Jones, taught me how to show up for myself when things got really difficult…like on the last lap of a mile race. It was a life lesson that would prove useful when I doubted myself as a student at Oxford and Harvard universities. He also became a role model of public service as he coached many poor and Black students, encouraged all of us to go to college. He expected every one of us make the most of the talents God had given us to develop."

You are the oldest in a family of seven kids. What skills did that give you in preparation for academic life and/or field work?

Where is your favorite place that you’ve traveled (for work or fun – or both)?

"My favorite city in the world is Cairo. The culture and the history are so rich and interesting, and its citizens are so hospitable.

"My favorite country destination is Thailand. It is the only country in Southeast Asia that was never occupied by a foreign power, and my experience working there was that everyone was so friendly and kind."