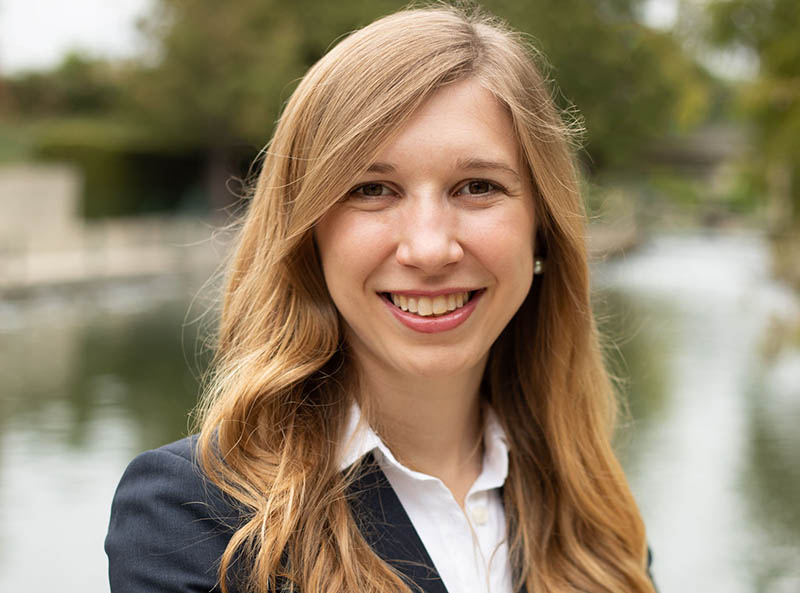 The second-year MPAff student and founder and executive director of the LBJ Women's Campaign School is one of the 60 scholars chosen to be a member of the program's sixth annual class.

Jan. 31 2020 — The Presidential Leadership Scholars (PLS) program has announced that Amy Kroll, a second-year MPAff student at the LBJ School of Public Affairs at The University of Texas at Austin, is among the 60 Scholars chosen for the program's sixth annual class. PLS serves as a catalyst for a diverse network of leaders brought together to collaborate and make a difference in the world as they learn about leadership through the lens of the presidential experiences of George W. Bush, Bill Clinton, George H.W. Bush and Lyndon B. Johnson.

The class was selected after a rigorous application and review process. Scholars were selected based on their leadership growth potential and their personal leadership projects aimed at improving civic engagement or social good by addressing a problem or need in their community.

Kroll is the founder and executive director of the LBJ Women's Campaign School, a newly launched initiative whose our goal is to increase the number of women in elected office and senior campaign staff positions, regardless of party, through training and guided practice. In 2019, she was selected by the European Parliament as one of 100 leaders worldwide to participate in the European Union's Visitors Program. Before her master’s program, Kroll spent six years working in Democratic politics in Texas and Washington, DC.

"A century after the 19th amendment, women are still underrepresented at every level of elected office," said Kroll. "I'm honored that the Presidential Centers are investing in me to lift up women in politics." —Amy Kroll

"A century after the 19th amendment, women are still underrepresented at every level of elected office," said Kroll. "I'm honored that the Presidential Centers are investing in me to lift up women in politics."

Over the course of six months, Scholars will travel to each participating presidential center to learn from former presidents, key former administration officials, business and civic leaders, and leading academics. They will study and put into practice varying approaches to leadership and exchange ideas to help strengthen their impact in their communities. The program kicked off in Washington, DC on Jan. 28.

The latest class joins an active network of 298 Scholars who are applying lessons learned through the program to make a difference in the U.S. and around the world. Examples of these Scholar-led efforts include providing employment and mentorship to veterans, helping adjudicated youth to improve job skills and attain a positive self-image, empowering clinicians to speak with patients about safe storage of firearms, and deploying much needed resources in the wake of natural disasters.

Since the program began in 2015, Scholars have consistently reported remarkable growth in leadership skills, responsibilities and opportunities for impact. For example, 91 percent of Scholars reported their sense of confidence or purpose as a leader changed since beginning PLS, and 96 percent of Scholars indicated their exposure to and appreciation of a wider variety of perspectives increased since beginning PLS.

About the LBJ School
The LBJ School, one of the nation's top public affairs schools, has a unique legacy of tackling the most complex policy problems of our day by creating innovative approaches that make a difference, not only within the walls of academia but also in the public and social dialogue of the world. Advancing scholarship and contributing viable solutions to society is the LBJ School's legacy and its path forward. More than 4,300 graduates are the living legacy of President Johnson's bold and fearless action. For more, visit lbj.utexas.edu.