How Churchill Waged War: An Introduction to Winston as War Leader | LBJ School of Public Affairs | The University of Texas at Austin
Skip to main content

How Churchill Waged War: An Introduction to Winston as War Leader 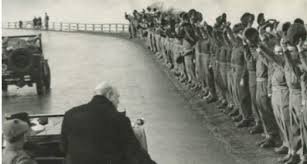 On Thursday, Nov. 7, the Clements Center for National Security will host Allen Packwood, Fellow of Churchill College at the University of Cambridge, the director of the Churchill Archives Centre, and a fellow of the Royal Historical Society, at The University of Texas at Austin for a talk on "How Churchill Waged War: An Introduction to Winston as War Leader."

Packwood was awarded an OBE for services to archives and scholarship in the 2016 Queen’s Birthday Honours. The Churchill Archives Centre is located in the grounds of Churchill College, and is home to the papers of Sir Winston Churchill, Baroness Thatcher, Sir John Major and almost 600 of their contemporaries: politicians, diplomats, civil servants, military leaders and scientists of the Churchill era and beyond. It is still collecting. Packwood likes to joke that it is the equivalent of four American presidential libraries. He will look inside the locked doors of the secure strong rooms and tell you the fascinating stories behind some of the Centre’s treasures, and will reveal how Churchill crafted his famous speeches. Packwood is a qualified archivist and has worked at the Churchill Archives Centre since September 1995, succeeding Dr. Piers Brendon as acting keeper in 2001 before being appointed director in 2002.  He was co-curator of "Churchill and the Great Republic," a Library of Congress exhibition, which ran from February to July 2004, and of "Churchill: The Power of Words," a display at the Morgan Library in New York from June through September 2012.

Packwood has also organized many events and lectures, including the successful conference on "The Cold War and its Legacy," staged over two days at Churchill College in November 2009, which was attended by senior representatives from China, Germany, Roumania, the Russian Federation and the United States. He also helped to organise Churchill 2015, a program of events commemorating the 50th anniversary of Sir Winston’s death, and was successful in getting the Churchill archive inscribed on the UNESCO international register for the Memory of the World. He is the author of several articles, co-wrote the publication accompanying the Library of Congress display, edited the guide to the Churchill Archives Centre, and has lectured extensively on Churchill in the United Kingdom and the United States. Packwood’s job has taken him to Bermuda, Cuba, Singapore and Hong Kong, and in 2011 he accompanied Celia Sandys and Lady Soames on a Chasing Churchill Mediterranean Cruise. His book, How Churchill Waged War, was published by Pen & Sword in 2018.