Guns, Guerillas, and the Great Leader: North Korea and the Third World | LBJ School of Public Affairs | The University of Texas at Austin
Skip to main content

Guns, Guerillas, and the Great Leader: North Korea and the Third World 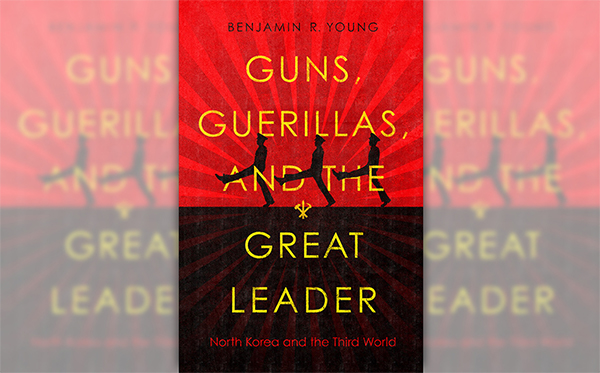 On Wednesday, Oct. 27, the Asia Policy Program at the Clements Center and Strauss Center will host Benjamin Young, assistant professor of homeland security and emergency preparedness in the Wilder School of Government and Public Affairs at Virginia Commonwealth University, for a virtual book talk on his recent release, Guns, Guerillas, and the Great Leader: North Korea and the Third World. Join us on Zoom at 12:15 p.m. CT. Virtual doors open at noon CT.

Far from always having been an isolated nation and a pariah state in the international community, North Korea exercised significant influence among Third World nations during the Cold War era. With one foot in the socialist Second World and the other in the anti-colonial Third World, North Korea occupied a unique position as both a postcolonial nation and a Soviet client state, and sent advisors to assist African liberation movements, trained anti-imperialist guerilla fighters, and completed building projects in developing countries. State-run media coverage of events in the Third World shaped the worldview of many North Koreans and helped them imagine a unified anti-imperialist front that stretched from the boulevards of Pyongyang to the streets of the Gaza Strip and the beaches of Cuba. This book tells the story of North Korea's transformation in the Third World from model developmental state to reckless terrorist nation, and how Pyongyang's actions, both in the Third World and on the Korean peninsula, ultimately backfired against the Kim family regime's foreign policy goals. Based on multinational and multi-archival research, this book examines the intersection of North Korea's domestic and foreign policies and the ways in which North Korea's developmental model appealed to the decolonizing world.

Benjamin R. Young is an assistant professor of homeland security and emergency preparedness in the Wilder School of Government and Public Affairs at Virginia Commonwealth University. He is the author of Guns, Guerillas, and the Great Leader: North Korea and the Third World (Stanford University Press, 2021). He received his Ph.D. from The George Washington University in 2018. He has previously taught at the U.S Naval War College and Dakota State University. He has published peer-reviewed articles on North Korean history and politics in a number of scholarly journals and is a regular contributor to NKNews.org.

Registration is required for all virtual and in-person events.