The Great Rift: Dick Cheney, Colin Powell, and the Broken Friendship That Defined an Era | LBJ School of Public Affairs | The University of Texas at Austin
Skip to main content

The Great Rift: Dick Cheney, Colin Powell, and the Broken Friendship That Defined an Era 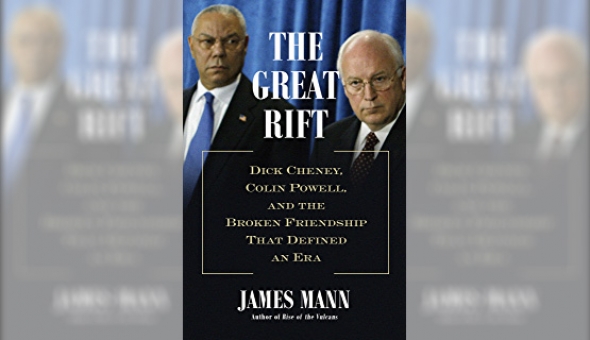 On Tuesday, Feb. 25, the Clements Center for National Security will host James Mann, European and Eurasian Studies Program Scholar-in-Residence, for a talk on his upcoming book The Great Rift: Dick Cheney, Colin Powell, and the Broken Friendship That Defined an Era at The University of Texas at Austin.

Mann is a Washington-based author who has written a series of award-winning books about American foreign policy and about China. He is a former newspaper reporter, foreign correspondent and columnist who wrote for the Los Angeles Times for more than 20 years. He is now an author-in-residence at Johns Hopkins University School of Advanced International Studies.

Mann’s best-known work is Rise of the Vulcans: A History of Bush’s War Cabinet. Published in 2004, the book became a New York Times bestseller. The Wall Street Journal called it "a work of serious intellectual history and a nuanced analysis of the debates that will continue to shape American foreign policy long after the Vulcans themselves have left the stage." New York Times reviewer Michiko Kakutani called it "compelling…lucid, shrewd and …blessedly level-headed." The pathbreaking book served as the primary source for accounts about the careers and ideas of Vice President Cheney and his associates. For example, Jane Mayer’s book, The Dark Side, opens with two pages from Rise of the Vulcans.

Another of Mann’s books is The Rebellion of Ronald Reagan, which reexamines the role Ronald Reagan played in the end of the Cold War. The book won the 2010 Ambassador Book Award of the English-Speaking Union of the United States.

Mann, a former Beijing correspondent for the Los Angeles Times, has also written three books about America’s relationship with China. The first, Beijing Jeep, is the story of a single American company and its frustrations starting to do business in China. Fortune magazine placed the book on its list of 75 all-time greatest books for business executives to read. The second, About Face: A History of America’s Curious Relationship with China, From Nixon to Clinton, narrates the history of America’s diplomacy with China, starting in the late 1960s. The book won the New York Public Library’s Helen Bernstein award for best book of the year (2000). The third book, The China Fantasy, is a critique of the notion that trade will lead to democracy in China. It was named by the Washington Post's Book World as one of the best books of the year (2007).

Before becoming a full-time author, Mann worked for more than three decades as a newspaper reporter, foreign correspondent and columnist. In his early 20s, he was a metro reporter for The Washington Post, where he worked on some of the early Watergate stories (the Nixon campaign issued a subpoena for Mann, along with Post publisher Katharine Graham and reporter Bob Woodward, to testify about Watergate coverage). From 1978 to 2001 Mann wrote for the Los Angeles Times, where he served as Supreme Court correspondent, Beijing bureau chief, diplomatic correspondent and foreign affairs columnist. His work was awarded the Edward Weintal Prize in 1999 for distinguished career-long coverage of foreign policy, and he was also a two-time winner of the Edwin M. Hood Award for diplomatic reporting.

Mann has also been a contributor to National Public Radio and to several magazines including The Atlantic, The New Republic and The American Prospect. His 1992 article in The Atlantic, “Deep Throat: An Institutional Analysis,” was widely credited as having been the first to explain the hidden dynamics that led the FBI’s Mark Felt to leak information about Watergate. The article was included in the book The American Idea: The Best of the Atlantic Monthly, a collection of the magazine’s best articles from the past 150 years.

Mann was born in Albany, N.Y., and graduated from Harvard College. He lives in Washington, DC with his wife Caroline Dexter, who teaches classics at Howard University. He has a daughter, Elizabeth Mann, and a son, Ted Mann.