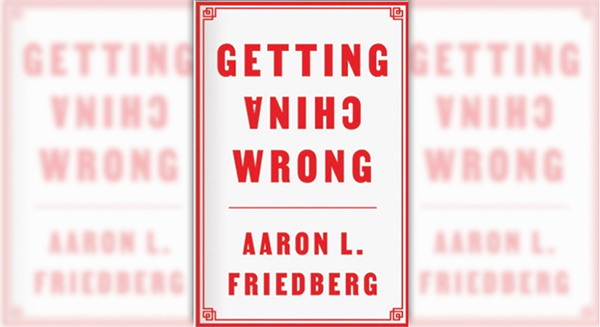 On Thursday, September 29, the Clements Center for National Security, the Asia Policy Program, the Alexander Hamilton Society at UT Austin and the Center for East Asian Studies will host Aaron Friedberg, Professor of Politics and International Affairs at Princeton University, for a book talk on his recent release Getting China Wrong. Join us at 12:15 pm in SRH 3.122, The LBJ School of Public Affairs.

Aaron L. Friedberg is Professor of Politics and International Affairs at Princeton University, where he has been a member of the faculty since 1987, and co-director of Princeton’s Center for International Security Studies.  In January 2022 he was appointed to a two-year term on the Congressional US-China Economic and Security Review Commission.  From 2003 to 2005 he served as a Deputy Assistant for National Security Affairs in the office of the Vice President and he was subsequently appointed to the Defense Policy Board.  In 2000-2001 he was a member of a panel tasked by Congress with reviewing the CIA’s analysis of China.  He has conducted studies for a number of government agencies, including the Office of Net Assessment in the Office of the Secretary of Defense and the National Security Council.

In 2001-2002 Friedberg was selected as the first occupant of the Henry A. Kissinger Chair at the Library of Congress. He has been a research fellow at the Australian Strategic Policy Institute, the Norwegian Nobel Institute, the Smithsonian Institution's Woodrow Wilson International Center for Scholars in Washington, D.C., and Harvard University's Center for International Affairs.  He is a member of the Council on Foreign Relations and the International Institute for Strategic Studies in London and serves as a counselor to the National Bureau of Asian Research.

Friedberg is the author of several books and monographs, including The Weary Titan: Britain and the Experience of Relative Decline, 1895-1905 (1988), In the Shadow of the Garrison State: America’s Anti-Statism and Its Cold War Grand Strategy (2000), A Contest for Supremacy: China, America, and the Struggle for Mastery in Asia (2011), Beyond Air-Sea Battle: The Debate Over U.S. Military Strategy in Asia (2014), The Authoritarian Challenge: China, Russia and the Threat to the International Order (2017).  He is the author (with Charles Bustany) of Partial Disengagement: A New U.S. Strategy for Economic Competition With China (2019).  His most recent book is Getting China Wrong (2022).