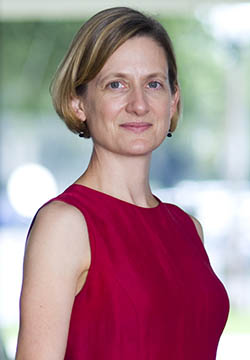 AUSTIN (Oct. 16, 2020) — On Wednesday, U.S. Environmental Protection Agency (EPA) Administrator Andrew Wheeler announced the appointment of new members to the Science Advisory Board (SAB) and its four subcommittees including: the Agricultural Science Committee (ASC), the Chemical Assessment Advisory Committee (CAAC), the Drinking Water Committee (DWC), and the Radiation Advisory Committee (RAC). Sheila Olmstead, a professor of public affairs at the LBJ School, is among the 16 new members.

"In a fair, open, and transparent fashion, EPA reviewed a diverse group of qualified applicants nominated for these committees," said EPA Administrator Andrew Wheeler. "Members who will be appointed or reappointed include experts from a wide variety of scientific disciplines who reflect the geographic diversity needed to represent all 10 EPA regions."

"The SAB helps to ensure that U.S. environmental rules are supported by the best scientific and economic analysis, and I look forward to helping to advise the EPA Administrator in this role." —Sheila Olmstead

Having expert scientists on the SAB who bring wide-ranging scientific perspectives and come from across the country has been a point of emphasis for this Administration. In FY 2021, 30 states and the District of Columbia will be represented on the SAB and its standing committees.

"I'm honored and excited to have been appointed to EPA's Science Advisory Board," Olmstead said. "U.S. environmental regulation has been a model for much of the rest of the world, and it is critical to the health of U.S. and global ecosystems, as well as Americans' health and quality of life. The SAB helps to ensure that U.S. environmental rules are supported by the best scientific and economic analysis, and I look forward to helping to advise the EPA Administrator in this role."

Olmstead, who has taught at the LBJ School since 2013, served in the White House from June 2016 to June 2017 as senior economist for energy and the environment at the President's Council of Economic Advisors. She said that experience helped prepare her for her SAB appointment.

She will teach microeconomics in the spring 2021 semester.

EPA Appoints New Members to the Science Advisory Board and Subcommittees (EPA, Oct. 14, 2020)

The Process
The EPA announced in a Federal Register Notice on April 1, 2020, that it was inviting nominations of experts to be considered for the administrator's appointment to the SAB and its four standing subcommittees. The nomination period was extended in another Federal Register Notice published on Aug. 14, 2020. The nomination period closed on Aug. 31, 2020. The SAB Staff Office identified 72 candidates that confirmed interest to serve on the Board and an additional 63 candidates with confirmed interest to serve on the four SAB subcommittees. Each of the candidates submitted bio-sketches and their curricula vitae. The list of candidates was posted on the SAB website for a 21-day public comment period that closed on Oct. 5, 2020.

The Science Advisory Board
In FY 2020 the SAB had 44 members. SAB members are initially appointed to serve a three-year term and may be reappointed for a second term. Twenty-three current SAB members' terms (neither first nor second) do not expire this year and they will continue to serve on the Board. One member completed his second term and is ineligible for reappointment. Another member resigned earlier this year. Nineteen current members of the SAB have completed one term of service. Thirteen of these first-term members will be reappointed by Administrator Wheeler. In addition, Administrator Wheeler is also appointing six new board members to bring the total SAB membership to 42 for FY 2021. Dr. John Graham will be appointed as the new SAB chair and Dr. Barbara Beck will be appointed as the SAB vice chair.