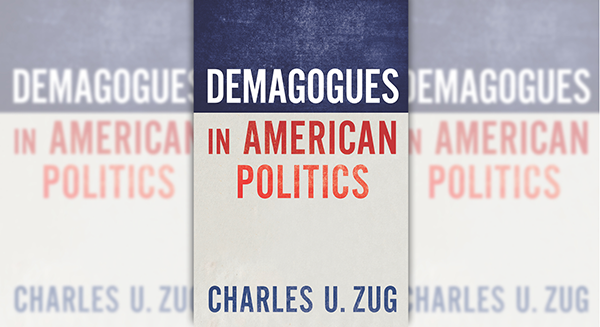 On Tuesday, October 25, the Clements Center for National Security and the Department of Government will host Charles Zug, Assistant Professor of Political Science at the University of Colorado - Colorado Springs, for a book talk on his upcoming release Demagogues in American Politics. Join us at 12:15 pm in RLP 1.302B, Patton Hall.

Charles Zug is an Assistant Professor of Political Science at the University of Colorado - Colorado Springs, where he teaches undergraduate courses on American institutions, APD, and American political thought. Zug's first book, Demagogues in American Politics (Oxford University Press), is scheduled to appear in print September 2022. Charles has authored peer-reviewed articles in multiple journals, including the Journal of Law and Courts and American Political Thought. He has also written widely for the popular press. Zug received his PhD in Government from the University of Texas at Austin. The Government Department at UT Austin has nominated his dissertation for the George C. Edwards III, E.E. Schattschneider, and Walter Dean Burnham Dissertation Awards.