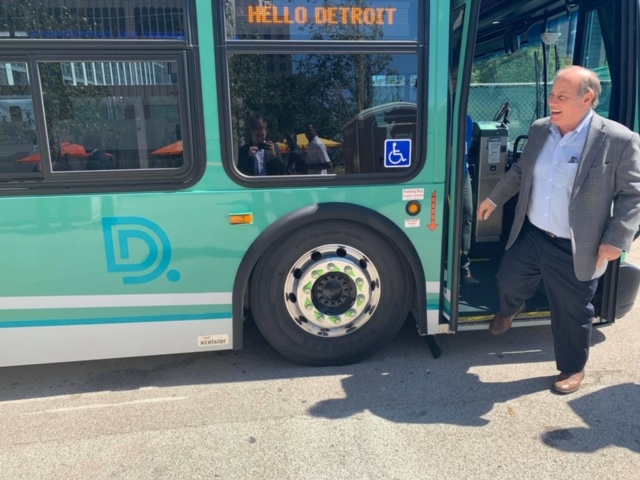 Mike Duggan was elected mayor of the city of Detroit on Nov. 5, 2013, and re-elected to a second term on Nov. 7, 2017. Duggan, born in Detroit, has spent his entire career working in the city to solve some of the most complex issues facing Detroiters, including crime, blight and access to jobs. When first elected, he received national attention, in part for being the first white mayor of the majority-black city since Roman Gribbs in the early 1970s, when Detroit's population still had a white majority.

In his first term, Mayor Duggan got to work restoring basic city services for all Detroiters. He established the Department of Neighborhoods, placing staff in each of the seven city council districts to help residents address concerns of blight in their community. He also took an active role in projects that installed more than 60,000 new LED street lights to streets, some left in the dark for years, removed nearly 17,000 blighted and abandoned houses and dramatically improved police and EMS response times, bringing them down to the national average.

He also returned financial accountability, working with the city council to pass three consecutive balanced budgets in FY2015, FY2016 and FY2017, which led to significant upgrades in the city’s bond rating.

The mayor has continued to bring down blighted houses, laying out a plan to address all vacant structures over the next two years, whether through demolition, renovation or boarding them up in the interim. He also created Project Green Light, which partners with more than 300 Detroit businesses so far to provide real time, high-definition video from the businesses to a new multimillion-dollar Real Time Crime Center. Since the program was launched two years ago, major crimes at participating businesses has decreased by nearly 40 percent.

Now in his second term and with city services back to levels Detroiters expect and deserve, Duggan has turned his attention to building "One Detroit for Everyone." This mission of an equitable revitalization has included creating and preserving affordable housing, revitalizing long-neglected neighborhoods, and ensuring every Detroiter has access to jobs and job trainings through the Detroit at Work program.

Duggan’s vision for the redevelopment of Detroit is based on eight principles:

Duggan has remained committed to the city throughout his career. As a young boy, he lived on Stansbury near Fenkell and Schaefer on the city’s west side and attended Catholic Central High School when it was still in the city on W. Outer Drive. While most of his friends were leaving Michigan to attend college in places like New York and Chicago, Duggan was committed to staying in the Detroit area and attended the University of Michigan in Ann Arbor for his undergraduate studies and law school.

Duggan’s first job out of college was at a law firm in downtown Detroit, to which he rode the bus to work every day until he could afford his first car. He later was hired to work in the Wayne County law department and before long was tapped to serve as Deputy Wayne County Executive under Ed McNamara from 1987 through 2000.

It was in his role as deputy CEO that Duggan’s management skills and commitment to his hometown began to display themselves.

During his tenure Duggan oversaw 14 straight balanced budgets and a fully funded pension system, led the effort to bring the Detroit Lions back downtown, co-chaired the construction of Comerica Park and Ford Field, and negotiated the deal with the Clinton administration that led to the construction Metro Airport’s spectacular midfield terminal.

During this time he also stepped in to run the SMART bus system, which was facing the threat of shutting down. In three years, he turned around the organization’s finances and partnered with unions to improve reliability, expand service in Detroit and increase ridership.

As Wayne County prosecutor from 2001 to 2003, Duggan led efforts to reduce gun crime and to address the problem of vacant homes across Detroit by seizing 1,000 abandoned homes and selling them to new owners who fixed them up and got them reoccupied.

Before running for mayor, Duggan again partnered with workers and unions to lead the Detroit Medical Center out of near bankruptcy and back to profitability in his first year (2004). Today, the DMC is undergoing $850 million in new construction as part of a deal Duggan negotiated as CEO.

As mayor, Duggan continues to be accessible to residents, attending at least one home gathering each week to help him keep in touch with Detroit residents, their needs and their evaluation of the city’s progress.