Danger Zone: The Coming Conflict with China | LBJ School of Public Affairs | The University of Texas at Austin
Skip to main content 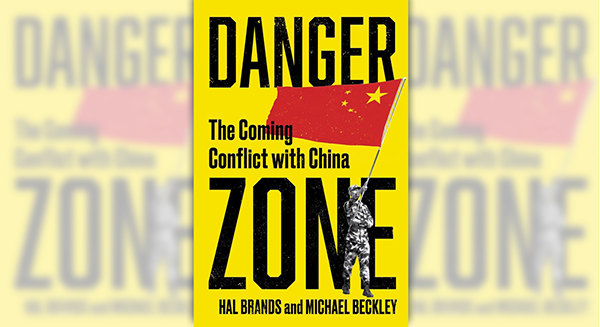 On Wednesday, October 5, the Clements Center for National Security, the Clements-Strauss Asia Policy Program, the America in the World Consortium and the Center for East Asian Studies will host Hal Brands, Henry A. Kissinger Distinguished Professor of Global Affairs at the Johns Hopkins School of Advanced International Studies (SAIS), for a book talk on his upcoming release with Michael Beckley Danger Zone: The Coming Conflict with China. Join us at 12:15 pm in RLP 1.302B, Patton Hall.

Hal Brands is the Henry A. Kissinger Distinguished Professor of Global Affairs at the Johns Hopkins School of Advanced International Studies (SAIS) and a Senior Fellow at the Center for Strategic and Budgetary Assessments (CSBA). He is also a columnist for Bloomberg Opinion. He is the author or editor of several books, including American Grand Strategy in the Age of Trump (2018), Making the Unipolar Moment: U.S. Foreign Policy and the Rise of the Post-Cold War Order (2016), What Good is Grand Strategy? Power and Purpose in American Statecraft from Harry S. Truman to George W. Bush (2014), Latin America’s Cold War (2010), From Berlin to Baghdad: America’s Search for Purpose in the Post-Cold War World (2008), and The Power of the Past: History and Statecraft (co-edited with Jeremi Suri, 2015). His newest book is The Lessons of Tragedy: Statecraft and World Order, co-authored with Charles Edel.

Hal served as Special Assistant to the Secretary of Defense for Strategic Planning from 2015 to 2016, and has been a Council on Foreign Relations International Affairs Fellow. He has also consulted with a range of government offices and agencies in the intelligence and national security communities and served as lead writer for the Commission on the National Defense Strategy for the United States.

Hal received his BA from Stanford University (2005) and his PhD from Yale University (2009). He previously worked at Duke University’s Sanford School of Public Policy and the Institute for Defense Analyses. He lives in Maryland with his wife and two children.