CANCELED: Seven Pillars: What Really Causes Instability in the Middle East? | LBJ School of Public Affairs | The University of Texas at Austin
Skip to main content 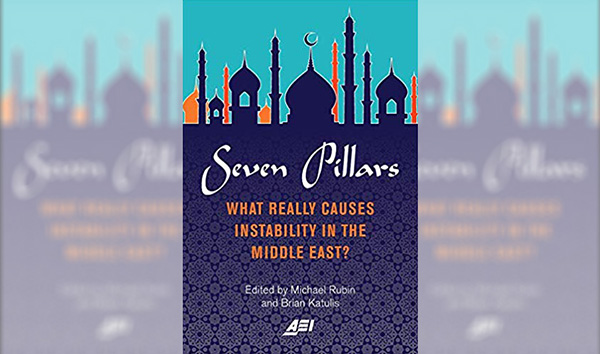 *This event has been canceled.*

On April 7, the Clements Center for National Security will host Brian Katulis, senior fellow at the Center for American Progress and Michael Rubin, resident scholar at the American Enterprise Institute, for a talk on their recently published book Seven Pillars: What Really Causes Instability in the Middle East? as part of our Focus on the Middle East Series.

For decades, U.S. foreign policy in the Middle East has been on autopilot: Seek Arab-Israeli peace, fight terrorism and urge regimes to respect human rights. Every U.S. administration puts its own spin on these initiatives, but none has successfully resolved the region’s fundamental problems.

In Seven Pillars: What Really Causes Instability in the Middle East? a bipartisan group of leading experts representing several academic and policy disciplines unravel the core causes of instability in the Middle East and North Africa. Why have some countries been immune to the Arab Spring? Which governments enjoy the most legitimacy and why? With more than half the region under 30 years of age, why does education and innovation lag? How do resource economies, crony capitalism and inequality drive conflict? Are ethnic and sectarian fault lines the key factor, or are these more products of political and economic instability? And what are the wellsprings of extremism that threaten not only the United States but, more profoundly, the people of the region?

The answers to these questions should help policymakers and students of the region understand the Middle East on its own terms, rather than just through a partisan or diplomatic lens. Understanding the pillars of instability in the region can allow the United States and its allies to rethink their own priorities, adjust policy, recalibrate their programs and finally begin to chip away at core challenges facing the Middle East.

Brian Katulis is a senior fellow at the Center for American Progress, where he focuses on U.S. national security strategy and counterterrorism policy. He is a veteran of the Bill Clinton administration's National Security Council, State Department and Defense Department. He is also a senior adviser to the Albright Stonebridge Group, where he advises clients on issues pertaining to the Middle East and North Africa.

Michael Rubin is a resident scholar at the American Enterprise Institute, where he researches Arab and Iranian politics and security. He is the author of Dancing with the Devil: The Perils of Engaging Rogue Regimes (Encounter, 2014) and a former adviser in the Office of the Secretary of Defense.