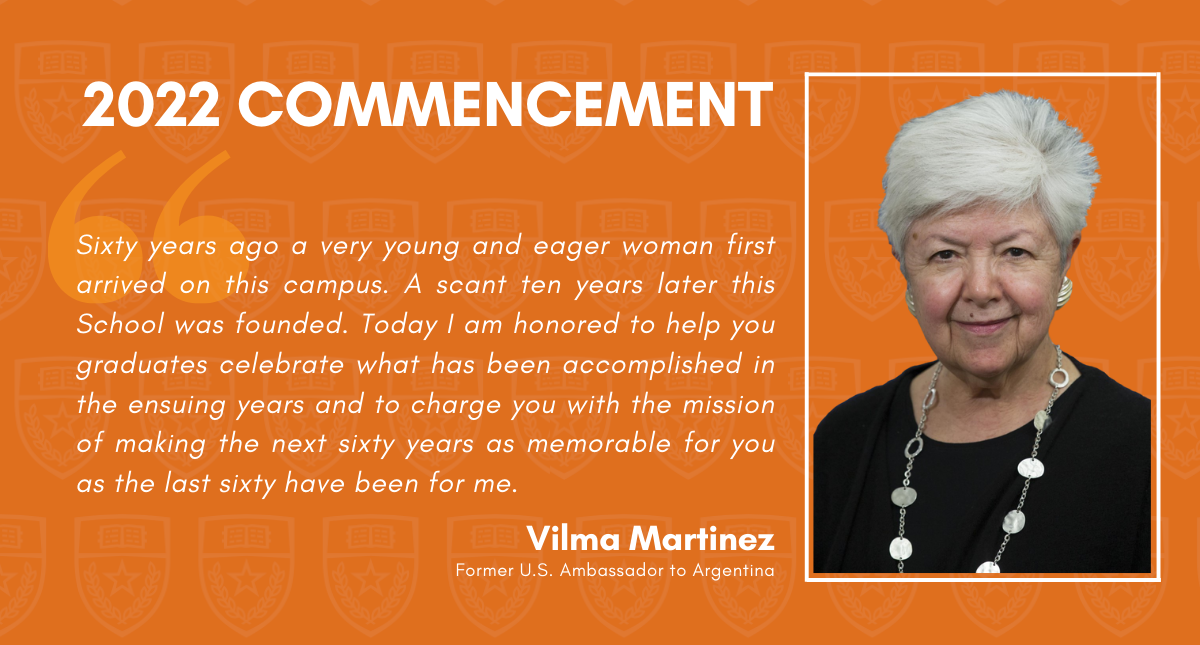 Vilma Martinez, the first woman to represent the United States as ambassador to Argentina and a UT graduate, returns to The University of Texas at Austin to deliver the graduation address to the Lyndon B. Johnson School of Public Affairs class of 2022 on May 21.

Ambassador Martinez was appointed by President Barack Obama and served as the U.S. ambassador to Argentina from 2009 to 2013, when she was awarded the Order of May (Argentina's highest honor awarded to a foreign national) in recognition of her tenure and for her work on behalf of improving mutual cooperation and understanding.

She previously served as president and general counsel of the Mexican-American Legal Defense and Educational Fund (MALDEF), a national nonprofit civil rights organization formed to protect the rights of Latinos in the United States.

From 2013 to 2018, she served as president of the Los Angeles Board of Harbor Commissioners, which oversees the management and operation of the Port of Los Angeles, the busiest port in the Western hemisphere. She was appointed by President Bill Clinton to serve on his Advisory Committee on Trade Policy and Negotiations from 1994 to 1996.

"We sought out a speaker who, through their public service, could inspire students to lead, even in the face of adversity. Ambassador Martinez represents the best of public service leadership." —LBJ School Dean JR DeShazo

"LBJ School graduates go on to become leaders, policymakers and scholars who change the world," said JR DeShazo, dean of the LBJ School. "We sought out a speaker who, through their public service, could inspire students to lead, even in the face of adversity. Ambassador Martinez represents the best of public service leadership."

Ambassador Martinez will address a crowd of approximately 700 attendees during the ceremony in Lady Bird Johnson Auditorium, which will celebrate students who graduated in December 2021, those who will graduate in May 2022, and those who will graduate this summer. Approximately 125 public policy students will earn their master's, executive master's, and Ph.D.s in public affairs, global policy studies, a DC-concentration, or public leadership.

"Sixty years ago a very young and eager woman first arrived on this campus," said Ambassador Martinez. "A scant 10 years later this school was founded. Today I am honored to help you graduates celebrate what has been accomplished in the ensuing years and to charge you with the mission of making the next 60 years as memorable for you as the last 60 have been for me."

The LBJ School graduation ceremony, headlined by Ambassador Martinez’s address, will take place before the university-wide commencement ceremony in Darrell K Royal-Texas Memorial Stadium. The UT-wide ceremony will also include the conferring of degrees by the president, the traditional lighting of the Tower in orange to honor graduates, and a fireworks display.