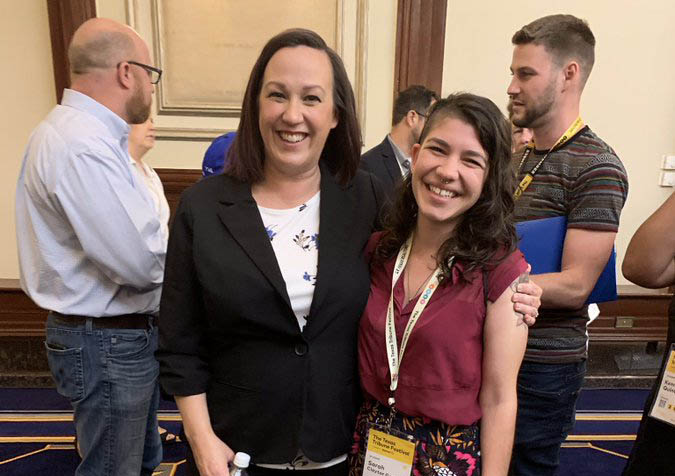 The LBJ School is proud to have been a sponsor of the 2019 Texas Tribune Festival, an annual buzzworthy event on politics and public policy in the heart of downtown Austin. The 2019 festival, which took place in downtown Austin Sept. 26–28, included panels and keynotes with leading policymakers including House Speaker Nancy Pelosi (D-CA), Sen. Ted Cruz (R-TX) and former U.S. Ambassador to the United Nations Susan Rice.

A team of 30 LBJ School students formed the heart of the festival's social media coverage, live-tweeting and commenting on events throughout the weekend. Scroll through the hundreds of posts on Twitter and check out a sampling of some of the team's work below.

Programmed in partnership with the LBJ Urban Lab:

A team of 30 LBJ School students formed the heart of the festival's social media coverage, live-tweeting and commenting on events throughout the weekend. Scroll through the hundreds of posts on Twitter and check out a sampling of some of the team's work below. The LBJ student social team was everywhere during the festival, soaking up the discussions and offering up their takes:

I’m at #TribFest19 and it feels like a big @TheLBJSchool and #txlege reunion.

Listening to Admiral McRaven talk about bridging political divides to advise past presidents on major military matters is truly inspiring. It’s an honor to have the opportunity to pursue graduate studies @TheLBJSchool with such a world renowned staff. #TribFest19

As #climatechange worsens, we have to confront how unfair funding for infrastructure & disaster recovery has made our climate-vulnerable communities even more vulnerable. You CANNOT address climate change w/ out addressing inequality. #climatejustice #takingheat #TribFest19 https://t.co/M2eSRVvmoL

90 minutes early for @PeteButtigieg and the line is already around the block #TribFest19 @TheLBJSchool pic.twitter.com/IegeAkTpsI

Great to see @dallasmayor at #TribFest19 and hear him speak about his vision for #Dallas and cities leading on climate during his one on one session this afternoon! pic.twitter.com/XC6Jnzq6L4

.@SRuhle doing an amazing job asking the right questions to @PeteButtigieg. A very dynamic and constructive panel at #TribFest19 https://t.co/RJZ9bwlR8m

I LOVED this panel. Thank you @aliciagarza @CecileRichards @aijenpoo for speaking about the incredible work y’all are doing with @supermajority #TribFest19 #LBJTribFest pic.twitter.com/evdkPbUVxb

Just arrived at my first #TribFest19 event ! @margarettalev will be interviewing @AmbassadorRice on the state of American diplomacy and foreign policy. #LBJTribFest

Quick visit to the state capital in between sessions of the Texas Tribune Festival. That’s one happy policy nerd. #TribFest19 #LBJTribFest pic.twitter.com/8xBQrTvzMX

Honored to participate in #TribFest19 ⁦@TexasTribune⁩ discussing immigration in the context of Bi-National Cites. ⁦@TheLBJSchool⁩ pic.twitter.com/QWiaHX8nr7

... at 8:30am on the last day of #TribFest19, no less. National media may have fallen out of love with @BetoORourke but Texans continue to have a lot of time for him! https://t.co/CjJzDVzN24

One of the reasons why immigrants come cuz their home countries are not safe and they cannot go back.@TexasTribune @TheLBJSchool @LBJSchoolAlumni pic.twitter.com/1oZcLnzvGx

"What's one thing that we can do to improve the immigration situation right now?" - @DrVMDS

"I'm not sure, but I know deterrence policies don't work. We saw that clearly in Arizona. It just pushes people further out." - @Perla_Trevizo #WhyMigrantsCome#TribFest2019

I am beyond blessed to be in this city doing and learning what I love. I am constantly surrounded by people who are changing the world and IT. IS. AWESOME.

As a woman in policy school, it's powerful to see women in politics. I'm glad I have the opportunity to see @amyklobuchar at #TribFest19 pic.twitter.com/0ro2jrYRUX

“Do you think Bill Barr should recuse himself? (From the impeachment process),” asked @NatashaBertrand
“I think he should resign,” answered @JoaquinCastrotx#TribFest19 pic.twitter.com/7x5jEVYLvd

Excited for a taping of “With Friends Like These” with @anamariecox and @AndrewGillum! #TribFest19 pic.twitter.com/FtdDH7NOz4

So impressed by the knowledge and detail that @Klonick is bringing to the discussion. Learning about the history of Section 230 and the forced application of aging laws to new technological innovations.

“It’s like a petri dish, and now everything’s turning green!”#LBJTribFest

@srgreenberg@ @TheLBJSchool #TribFest19. A newly registered voter takes 3 contacts to get them to vote.

“Doing Our Share” moderated by @iamstevenpedigo of The LBJ School Urban Lab with Ashwini Chhabra of Bird scooters, Spencer Cook the City of Austin Manager, @Twapril director of public policy at Lyft, and @VoteViagran of the San Antonio city council at #TribFest19 @TheLBJSchool pic.twitter.com/xjHShdTiAQ

Former Ambassador to the United Nations @SamanthaJPower on what she would change about the institution:

“There are 3 things I’d change about the UN: 1) President Xi 2) President Putin and 3) President Trump. “

I just got to meet Ambassador @SamanthaJPower and thank her for speaking to us about her experience as a woman in foreign policy here at #TribFest19. Day: made. #LBJatTTF pic.twitter.com/8vFtT6Iv2S

#TribFest19 was awesome. But, damn I am tired. Great few days. Thank you @evanasmith for a terrific partnership exploring big issues impacting #cities.

Highlight of #TribFest19: meeting @mjhegar and getting to tell her how much I love her policies & politics. Lots of young ppl lining up to talk to her, with one young woman saying, I love how angry you are.

We’re riled up and ready to knock on doors for you! pic.twitter.com/w99KZLGhZ1

Wow! This was the best way to end #TribFest19! @JulianCastro is a former falculty member of the @TheLBJSchool. We were all so exited to get a picture! #LBJTribFest19 Thank you Julián!

On that note, I’m signing out  pic.twitter.com/D3A5ZdfhFr

“We must pursue the facts further to see if it violates the constitution which I believe it did.” @SpeakerPelosi

Just a couple @TheLBJSchool students having the time of their lives!!!

(Our buttons say we an educated voter and a green voter pic.twitter.com/jrFtsOqo8y

Had a blast at #TribFest19! Thanks to @TheLBJSchool for sending this policy nerd to @TexasTribune’s amazing gathering of wonks, nerds, and leaders. Catch me and @marthafur at #tribfest22 talking about queer #Latinx folks in politics and policy pic.twitter.com/uNu6MEs0RX

And that’s a wrap on #TribFest19! Thank you all for following along. I was in policy wonk heaven. #LBJatTTF #policywonkintraining pic.twitter.com/Mm2HJLHaey