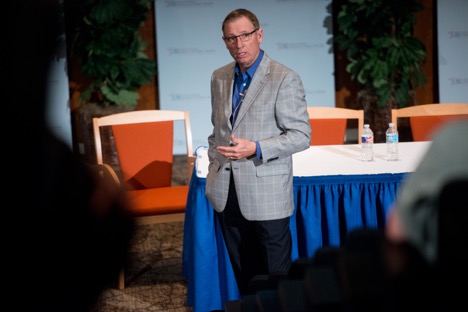 The implications of state and national policy changes in the areas of trade, immigration and border governance were the focus of "Texas 2030: Texas in a Changing World Economy," a one-day symposium hosted by the LBJ School of Public Affairs at The University of Texas at Austin on Oct. 16.

"The Texas political leaders on hand, including Julián Castro, Steve Adler, and Byron Cook, recognized these economic challenges to Texas' future eloquently in their remarks," said Kenneth Flamm, LBJ professor and conference co-chair. "Texas is the leading example of a state whose recent economic growth, and economic future, are closely tied to US success in competing in a globalized world economy."

"The conference provided a systematic analysis of the long-term effects of the NAFTA — and globalization generally — on the structure of the Texas economy, and of immigration, both from elsewhere in the US and from abroad, on the demographics of the state's population," said James Galbraith, LBJ professor and conference co-chair. "The panels on the border and on detentions and deportations were eye-opening examinations of the consequences of federal policies for the people of the state, including both long-term residents and new arrivals."

By the end of the day, several points were clear, Flamm said.

"The global industrial supply chains that were created because of NAFTA (and other trade agreements) clearly have provided a net economic benefit to Texas, and Texans should resist changes to trade policy that don’t take their interests into account," he said.

Flamm said immigrants have also been a big plus for the workforce in Texas, overall, and the state is much more dependent on immigrants than the average U.S. state.

"Texans should pay extra careful attention to the details of more restrictive immigration policies that are being proposed, because they may have outsized impacts on the Texas economy," he continued. "Texas should be a leader in showing how investments in education, at all levels, make Texans winners from globalization, reaping economic benefits from both increased trade and immigration."

Flamm said drug and human trafficking along the border is an unpleasant reality; however, policies to suppress it can reduce the quality of life along the border and make legal activities more expensive and difficult.

While specific next steps remain to be determined, Galbraith said the general focus of the project should continue to be on the medium-term consequences of changes that are already underway.

"In my view, we should examine resource questions (energy, water), social and political developments and trends, including issues of inequality, and the effects of climate change," he said. "But no precise decisions have been taken. What we do will depend in part on how well we can identify important work already underway on issues specifically relating to Texas."