Religion and American Foreign Policy, 1945-1960: The Soul of Containment 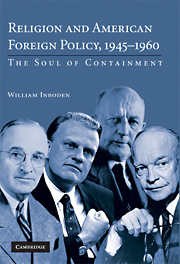 <p> In <em>Religion and American Foreign Policy</em>, Inboden examines the influences of religion on the Cold War. Presidents Truman and Eisenhower and other American leaders believed that human rights and freedoms were endowed by God, that God had called the United States to defend liberty in the world, and that Soviet communism was especially evil because of its atheism and its enmity to religion. This public theology was used to mobilize domestic support for Cold War measures, to determine the strategic boundaries of containment, to appeal to people of all religious faiths around the world to unite against communism, and to undermine the authority of communist governments within their own countries.</p>