Prospects for civil-military relations during a Biden-Harris administration 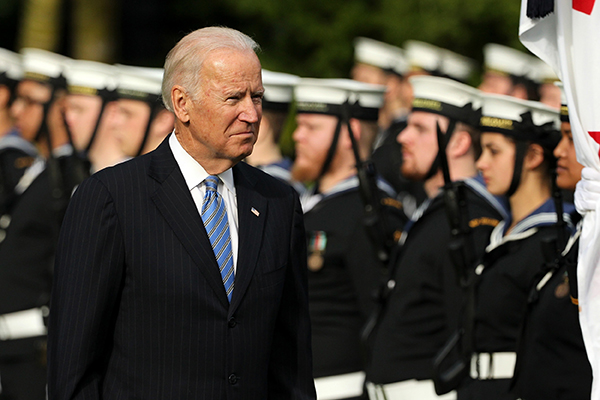 Gen. (Ret.) Vincent K. Brooks is a distinguished senior fellow at the Clements Center for National Security. Gen. Brooks is a career Army officer who recently retired from active duty as the four-star general in command of all U.S. forces in Korea, where he concurrently commanded United Nations Command as well as the Republic of Korea—U.S. Combined Forces Command comprising over 650,000 Koreans and Americans under arms from 2016 to 2018. In 2003, while serving in the Joint Staff at the Pentagon, Brooks was chosen to serve as the deputy director of operations and primary spokesperson for the America's fighting force in the Middle East and Central Asia, the United States Central Command, as it conducted combat operations against Iraq. Brooks also served as the commander for the U.S. Third Army, the U.S. Army portion of Central Command from 2011 to 2013 — critical times in the reduction of forces in Iraq, the increase of forces in Afghanistan, the "Arab Spring" and the standoff against Iran. Highly experienced in command of increasingly larger and more complex organizations over his 42 years of service spent mostly in leadership roles, Brooks led in assignments completed with the 82nd Airborne Division, 1st Infantry Division, the 1st Cavalry Division, the 2nd Infantry Division, the 3rd Infantry Division, the Third Corps, the Third Army, and the U.S. Army in the Pacific. In his final assignment in South Korea, he served both the president of the United States and the president of the Republic of Korea. He also served at the Pentagon with both the Army headquarters as well as with the Joint Staff overseeing all the U.S. military operations around the world.

Kori Schake is the director of foreign and defense policy studies at the American Enterprise Institute (AEI). Before joining AEI, Dr. Schake was the deputy director-general of the International Institute for Strategic Studies in London. She has had a distinguished career in government, working at the U.S. State Department, the U.S. Department of Defense and the National Security Council at the White House. She has also taught at Stanford, West Point, Johns Hopkins University's School of Advanced International Studies, National Defense University and the University of Maryland. Dr. Schake is the author of five books, including America vs the West: Can the Liberal World Order Be Preserved? (Penguin Random House Australia, Lowy Institute, 2018); Safe Passage: The Transition from British to American Hegemony (Harvard University Press, 2017); State of Disrepair: Fixing the Culture and Practices of the State Department (Hoover Institution Press, 2012); and Managing American Hegemony: Essays on Power in a Time of Dominance (Hoover Institution Press, 2009). She is also the co-editor, along with former Secretary of Defense Jim Mattis, of Warriors & Citizens: American Views of Our Military (Hoover Institution Press, 2016). Dr. Schake has been widely published in policy journals and the popular press, including in CNN.com, Foreign Affairs, Politico, New York Times, Wall Street Journal and Washington Post. She is a contributing writer at The Atlantic and War on the Rocks. Dr. Schake has a Ph.D. and M.A. in government and politics from the University of Maryland, as well as an MPM from the University of Maryland School of Public Policy. Her B.A. in international relations is from Stanford University.

Peter D. Feaver (Ph.D., Harvard, 1990) is a professor of political science and public policy at Duke University, where he is director of the Duke Program in American Grand Strategy. Feaver is author of Armed Servants: Agency, Oversight, and Civil-Military Relations (Harvard Press, 2003) and of Guarding the Guardians: Civilian Control of Nuclear Weapons in the United States (Cornell University Press, 1992). He is co-author, with Christopher Gelpi and Jason Reifler, of Paying the Human Costs of War (Princeton Press, 2009); with Susan Wasiolek and Anne Crossman, of Getting the Best Out of College (Ten Speed Press, 2008, 2nd edition 2012); and with Christopher Gelpi, of Choosing Your Battles: American Civil-Military Relations and the Use of Force (Princeton Press, 2004). He is co-editor, with Richard H. Kohn, of Soldiers and Civilians: The Civil-Military Gap and American National Security (MIT Press, 2001). He has published numerous other monographs, scholarly articles, book chapters and policy pieces on grand strategy, American foreign policy, public opinion, nuclear proliferation, civil-military relations and cybersecurity.

Jim Golby joined the Clements Center for National Security in July 2020 as a senior fellow and the Department of Government as a lecturer. He is a U.S. Army strategist with 20 years in uniform, currently serving as a defense policy adviser at the United States Mission to NATO. His work focuses on civil-military relations, military strategy, domestic sources of foreign policy, and American national security policy. He is also the co-host of the Center for Strategic and International Studies' "Thank You for Your Service" podcast, a non-resident senior fellow with the United States Studies Centre in Sydney, Australia, and a member of the editorial board for the inter-disciplinary journal Armed Forces & Society. Golby previously served as a special adviser to the vice president of the United States, as a special assistant to the chairman of the Joint Chiefs of Staff, and as an assistant professor of American politics, policy and strategy at the U.S. Military Academy at West Point. Before becoming an Army strategist, Golby commanded a security company in Iraq (2006–07) and led a scout platoon in combat in Iraq (2004–05). He is a former international affairs fellow with the Council on Foreign Relations (2016–17) and a Munich Young Leader (2017). He is currently working on two main research projects: a book project, with Dr. Peter Feaver, that examines the determinants of public confidence in the U.S. military and another project that explores how political polarization shapes American civil-military relations. Golby graduated with a B.S. in American government from the United States Military Academy and was commissioned in the U.S. Army in June 2001. He also holds a Ph.D. in political science from Stanford University.

For more information on this event, contact Elizabeth Doughtie: elizabeth.doughtie@utexas.edu.