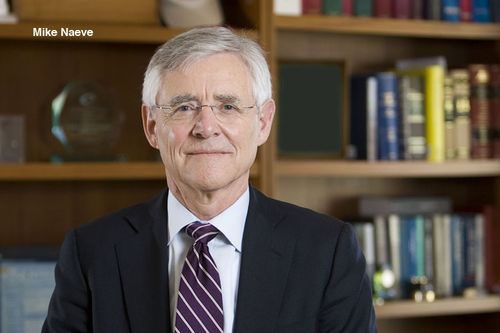 Photographs from this event are now available here.

The LBJ School is pleased to announce the 25th recipient of the Distinguished Public Service Award (DPSA), Mike Naeve, who is a member of the inaugural entering class in 1970.

Mr. Naeve was nominated by a group of 10 alumni working in the energy industry from Texas, Boston, Washington, D.C., and Buenos Aires, a clear indicator of Mr. Naeve's distinction in his field. They stated in their nomination letter, "For more than all of Mike's knowledge and accomplishments, we are proud to support his nomination for the DPSA because of his commitment, compassion and genuine desire to make the country we live in a better place. We consider Mike to be a shining example of what can be accomplished in the name of public service."

“Mike Naeve is a living example of the UT motto that ‘what starts here changes the world’,” said LBJ School Dean Robert Hutchings. “From his very first job working for the LBJ Foundation through his long and illustrious career, he represents the very best of what we try to instill in our students and take pride in honoring among our graduates.”

In addition to his impressive career in the government sector, Mr. Naeve is also a highly regarded and recognized attorney. He received Chambers and Partners' "The Chambers Award for Excellence" in 2006 as the nation's leading lawyer in his field of energy regulation. He is the only attorney in his field to achieve a star designation by Chambers USA and Chambers Global, and he has been selected for inclusion in The Best Lawyers in America, The Legal 500 United States and the Lawdragon 500 Leading Lawyers in America.

Mr. Naeve holds a B.S. in mechanical engineering from The University of Texas at Austin and a J.D. from George Washington University as well as a master of public affairs degree from the LBJ School.

Mr. Naeve will be presented with the Distinguished Public Service Award at a ceremony on Thursday, June 25, 2015, at the annual Washington, D.C. alumni reception at The University of Texas System's Archer Center.

The LBJ School DPSA was established in 1989 and is presented annually to an LBJ School graduate whose career and public service record best represents the values on which the School was founded. The 2014 DPSA Selection Committee was composed of Moses Garcia (MPAff 2005), chair of the LBJ School Alumni Board Alumni Reunion & Recognition Committee; David Warner, LBJ School Professor; David Berteau (MPAff 1981), recipient of the 2013 DPSA; Jon Gillum (MPAff 2002); and Kimberly Springer (MPAff 2004).