Professor James Galbraith on the link between inequality and financial instability | LBJ School of Public Affairs | The University of Texas at Austin
Skip to main content
News • February 10, 2014

Professor James Galbraith on the link between inequality and financial instability 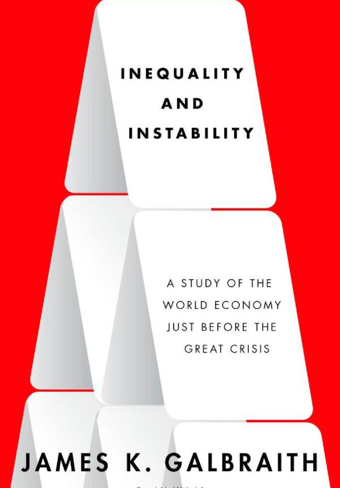 In his 2012 book Inequality and Instability: A Study of the World Economy Just Before the Great Crisis, Professor James Galbraith draws on over 40 years of data to dispel major misconceptions about the rise of inequality in the world economy. His work challenges both those who point to technology and those who point to trade and outsourcing.

The research outlined in Inequality and Instability was based on the work of The University of Texas Inequality Project, a research group consisting mainly of Ph.D. students working under Galbraith's supervision.

The Gap Between the Rich and the Poor

"One of the purposes of the Inequality Project's research has been to try to clarify what these gaps consist of and what the similarities and differences are across countries," said Galbraith. "What we find is that richer countries tend to be more egalitarian because they have what it is to be a rich country,­ a middle class. A middle class tends to stabilize your center and lowers your inequality."

However, the middle class in the United States and other rich countries is shrinking, says Galbraith.

"For countries very high in the world income scale, as you get richer you get more unequal. And that is because your economies shift toward being dominated by finance, by banks, by technology firms, and in some cases by oil and energy firms," he said. "And when you have growth, these industries are already at the top so they get richer relatively and the inequality increases."

According to Galbraith, the rise of the finance industry has had a direct affect on inequality globally.

"In every place in the global economy where you see a rise in inequality, a major winner has been the financial system," said Galbraith.

Although the banking sector was affected by the financial crisis, he points to major government bailouts as the reason why some individuals were adversely affected while most large institutions are still standing.

According to Galbraith, most countries see a rise in inequality during a financial boom spearheaded by one industry that is forging ahead of the rest of the economy. It not necessarily a sign of immediate trouble, says Galbraith, but it is a sign of trouble ahead, especially when that industry’s growth is based on debt that may not get repaid.

The United States already experienced a time of great instability due to inequality during this most recent financial crisis.

"I think the last five years has been a reaction period to the crisis. The middle class is under a lot of stress and is trying to consolidate its position," he said. "The system as a whole has held up and has helped stabilize the incomes of a lot of people. That's because we have these institutions such as Social Security, Medicare, Medicaid and food stamps that do protect."

Inequality and the War on Poverty

According to Galbraith, many of the laws initially passed by President Lyndon Johnson 50 years ago as part of the War on Poverty were expanded and helped stabilize the middle class during the financial meltdown.

"The big things that the Great Society did, and laid the groundwork for greatly reduced poverty for certain categories of people in the United States," he said. "At the end of the '60s, about a third of the elderly in the U.S. were poor. That figure dropped to 10 percent and it is now a major factor in social stability in the U.S."

Galbraith points to programs like Head Start, Medicaid, Medicare and other programs, which were expanded in the 1970s, as making headway toward reducing poverty.

"These kinds of systems of common insurance and mutual support have made an enormous difference and remain very valuable," he said. "But they are under continued criticism and attack, which means defending them for me is a very important priority."

To that end, Professor Galbraith says that he and his Ph.D. students will continue working through the Inequality Project to make datasets available to the research community and the public. To date, the Inequality Project has pieced together and made publicly available 40 years of datasets on pay inequality at the regional, national and global levels. Faculty and students have written numerous working papers, many of which have been published in prominent economic journals. The Inequality Project is currently working to update data through 2010 to be able to examine more recent worldwide trends in income disparities.