Christian Peratsakis came to the LBJ School of Public Affairs in 2010 to take part in ground-breaking research into how climate change affects political stability in Africa.

“This research has completely changed my experience and my focus in development,” said Peratsakis, who was already an experienced researcher in the field of climate change and development before joining more than 80 other graduate students in the LBJ School.

“This project has given me the unique opportunity to define my career path,” he said.

The project was part of the Climate Change and African Political Stability program administered by the Robert S. Strauss Center for International Security and Law, housed 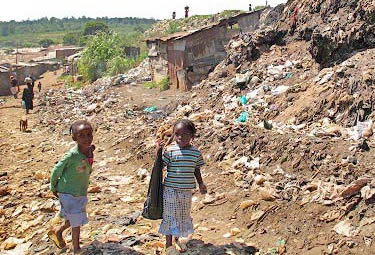 The Kibera slum in Nairobi, Kenya is home to between 200,000 and 1 million people, by many estimations the largest slum in Africa. The absence of government services, including rubbish removal, in Kibera and other informal settlements leads to everyday challenges for residents, including children.

at the LBJ School. The CCAPS program began in 2009 with a five-year, $7.6 million grant from the Minerva Initiative, a U.S. Department of Defense program that seeks to build deeper understanding of the social, cultural and political dynamics that shape regions of strategic interest around the world.

Peratsakis conducted research in Malawi, where he and other students worked with that nation’s Ministry of Finance to obtain all documents pertaining to foreign aid given to the country.

They compiled the information and analyzed its relation to climate change. The resulting database, produced jointly by CCAPS and its nonprofit partner AidData, was added to CCAPS’s interactive online mapping system to help explain how and where aid is being distributed, and whether aid is targeting areas with the greatest security risks. AidData is a joint initiative of the College of William and Mary, Brigham Young University and the nonprofit Development Gateway.

“This Malawi Project is the first time aid tracking of this kind has been done on this scale,” said Peratsakis. “It’s tracking 33 donors from over 2,500 sub-national locations. We have projects from donors like India, China, Saudi Arabia and Kuwait that have never really reported before. We can start looking at where donors are clustering and where they are coordinating their efforts. We can answer questions about whether certain types of projects work better in certain areas or whether the aid is making it to the intended beneficiaries.” 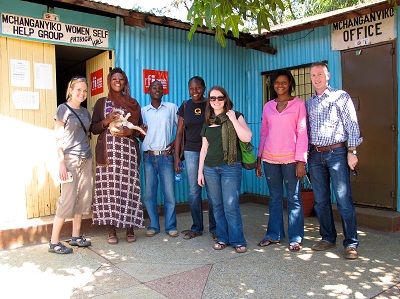 Professor Frank Gavin is the principal investigator of the CCAPS program and the director of the Strauss Center.

“What has been most gratifying about the program is how the research work has been incorporated into the educational experience of the students,” said Gavin. “The level of opportunity for master’s students to gain both on-the-ground experience and policy experience has been something that we couldn’t have predicted at the beginning but has just gone incredibly well.”

During the past three years, 82 university students have participated in CCAPS research, along with 14 additional students from partner universities. Students have conducted fieldwork in Africa and collaborated with faculty members to produce 43 publications and reports based on their work. The students have worked as research assistants, interns, database coders and field researchers.

Originally interested in environmental policy, Tiffany Tripson signed up for a project through CCAPS that focused on how governments prepare for disasters caused by climate change. As part of her project, Tripson’s team interviewed 61 organizations involved in disaster aid in East Africa.

“Getting to see a different side of Africa — the professional, the academic and the very high-level policymaking side — gave me a lot of inspiration and hope,” said Tripson, who graduated this spring. “I would like to work in that sector because there are a lot of good things going on and a lot of work that needs to be done.”

Todd Graham Smith, a Ph.D. student at the LBJ School, has traveled to 10 countries in Africa on various assignments for the program since 2009. 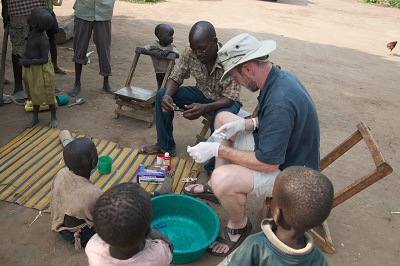 Todd Graham Smith assists a nine-year old girl who had an open wound in northern Uganda. Students discovered her wound and took her to a nearby clinic. Smith shows the girl and her family how to dress the wound themselves after she received treatment.

“I’ve been interested in Africa since I was in high school and wrote letters to advocate for the freeing of Nelson Mandela,” said Smith. But Smith didn’t become interested in development work until he took a position in Ethiopia with Doctors Without Borders. From there, Smith knew he wanted to delve deeper into development work that could do more to help the region.

Smith has worked on vulnerability modeling that provides information on four sources of vulnerability: physical exposure to climate hazards such as floods, population density, household and community resilience, and governance and political violence.

During the past year, CCAPS has used program research in a number of areas to produce an interactive map of climate and security in Africa. Publicly available online, the map illustrates the ebb and flow of factors that contribute to countries’ vulnerabilities and response strategies regarding climate change.

CCAPS faculty members and students are now developing another research project focused on vulnerabilities in more urbanized areas, which are at the mercy of rising food prices.