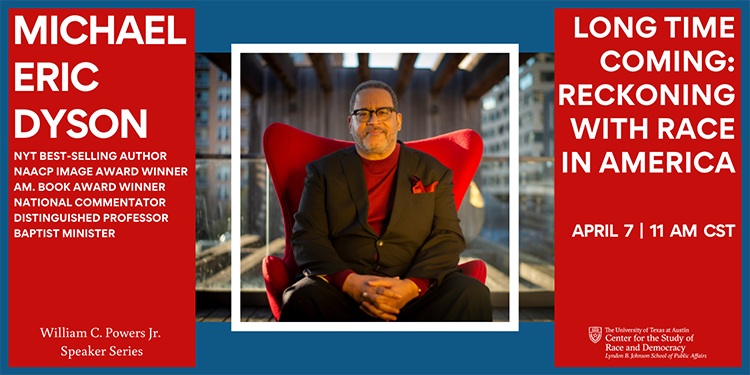 As part of our William C. Powers Jr. Speaker Series, the Center for the Study of Race and Democracy (CSRD) proudly presents "Long Time Coming: Reckoning with Race in America with Michael Eric Dyson."

Michael Eric Dyson is a celebrated professor, writer, preacher, lecturer and media personality. He earned his Ph.D. in religion from Princeton and has taught at many universities, including Brown, UNC Chapel Hill, Columbia, DePaul, the University of Pennsylvania and Georgetown. Dyson is currently the Distinguished University Professor of African American and Diaspora Studies, and Centennial Professor at Vanderbilt University. He has written over 20 books including New York Times bestsellers The Black Presidency: Barack Obama and the Politics of Race in America; and Tears We Cannot Stop: A Sermon to White America. His latest book, Long Time Coming: Reckoning with Race in America, was heralded as Amazon's Bestselling Book for 2020.

Dyson is an American Book Award recipient and a two-time winner of the NAACP Image Award for Outstanding Literary Work, Non-Fiction. He has served for the last 30 years as a commentator, host and analyst on NPR's "Morning Edition," "The Takeaway," and "Fresh Air with Terry Gross," "Meet the Press," "Face the Nation," "The Today Show," "Good Morning America," "Real Time with Bill Maher," MSNBC, CNN and Fox News.

Center for the Study of Race and Democracy (CSRD)