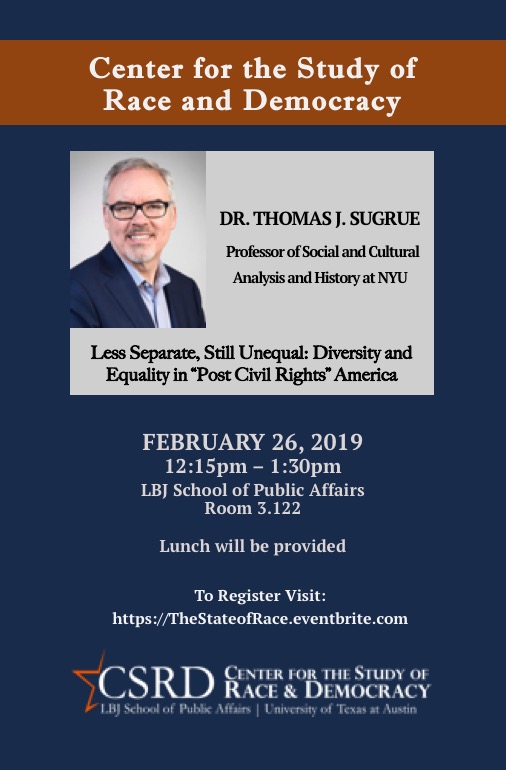 Dr. Thomas J. Sugrue is professor of social and cultural analysis and history at NYU. A specialist in 20th-century American politics, urban history, civil rights and race, Dr. Sugrue will speak on the state of race, immigration and diversity in the United States, focusing on metropolitan America.

He is the author of Not Even Past: Barack Obama and the Burden of Race (Princeton University Press, 2010), also in French translation, and Sweet Land of Liberty: The Forgotten Struggle for Civil Rights in the North (Random House, 2008), a main selection of the History Book Club and a finalist for the 2008 Los Angeles Times Book Prize.

Sugrue's newest book, co-authored with Glenda Gilmore of Yale University, is These United States: A Nation in the Making, 1890 to the Present (W.W. Norton, 2015). He is currently engaged in a research project on race, ethnicity, and citizenship in France and the United States. His long-term research project is a history of the rise and travails of the modern American real estate industry, from the late 19th century to the current economic crisis.

Sugrue was educated at Columbia; King's College, Cambridge, and Harvard, where he earned his Ph.D. in 1992. He is a fellow of the American Academy of Arts and Sciences, an elected member of the Society of American Historians, and past president of both the Urban History Association and the Social Science History Association. He taught from 1991 to 2015 at the University of Pennsylvania, where he was David Boies Professor of History and Sociology and founding director of the Penn Social Science and Policy Forum.