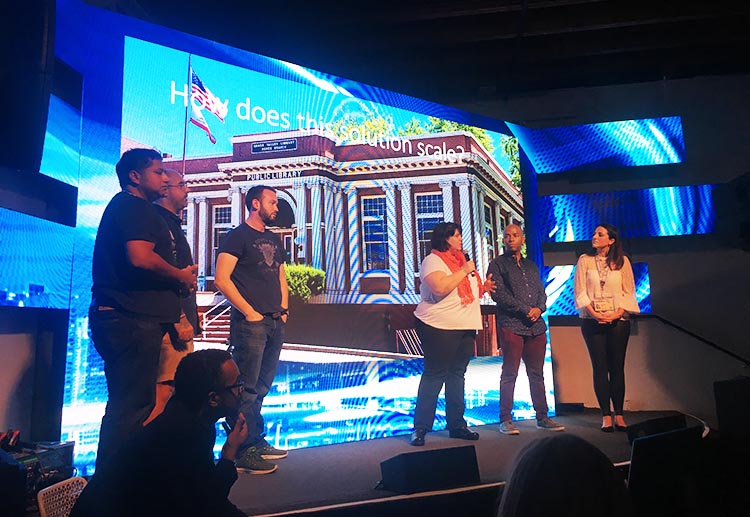 During the first weekend of SXSW, students from the LBJ School of Public Affairs participated in the Dell Technologies PolicyHack, an interactive hack-a-thon that tasks teams of policymakers, entrepreneurs, venture capitalists and students, along with a "coach," to design solutions to policy challenges faced by entrepreneurs running growing businesses.

Following the hack, teams have five minutes to pitch their idea to a panel of experts including members of Congress and the live audience. The audience votes for the winning solution, and the winning team receives not only a prize from Dell, but also a commitment from Dell to further develop the proposal.

"With an hour to come up with a solution, we couldn't let the perfect be the enemy of the good," said LBJ student and PolicyHack participant Tamara Keeney (MPAff '19).

Keeney, along with fellow participants, were asked to explore how the government can create jobs and encourage workforce development in an environment of significant disruption due to autonomous vehicles.

"Solutions need to be innovative, adoptable and scalable," said LBJ student Peggy Kemp (MPAff '18). "Given a pressing issue to solve under serious constraints such as time, money, lack of resources, allowed the team to strip away ideological differences to work together for a solution."

Kemp and her team suggested a block grant for states to spur innovative apprenticeships in technology, including conducting evaluations every two years to ensure the programs work effectively.

"States could target money to employers in areas most affected by disruption," Kemp explained.

"At LBJ, we get a lot of practice working in teams and finding compromise. This was a helpful skill during the challenge. I was able to put myself in the role of facilitator and weaver of ideas to come up with a solution that included a piece of each team member’s input." —Tamara Keeney

For LBJ student Hayden English (dual MPGS, MPH '18), this was his second year participating in the Dell PolicyHack. English said he has learned the importance of tailoring the message to the audience.

"Our pitch keyed on funding from private industry, which went over well with the politicians but hurt us with the executives," he said. "Despite not being on the winning team either year, the career connections I've made were well worth the time!"

Both Keeney and Kemp said their coursework at the LBJ School helped prepare them to tackle issues thoughtfully and from many perspectives.

"At LBJ, we get a lot of practice working in teams and finding compromise," Keeney said. "This was a helpful skill during the challenge. I was able to put myself in the role of facilitator and weaver of ideas to come up with a solution that included a piece of each team member's input."

English, who recently participated in the MGPS Crisis Simulation, said that event helped prepare him for the PolicyHack.

"The GPS Crisis Simulation was good practice for the PolicyHack. Both demanded effective communication of complex ideas within a compressed timeframe — on a topic outside of my expertise."