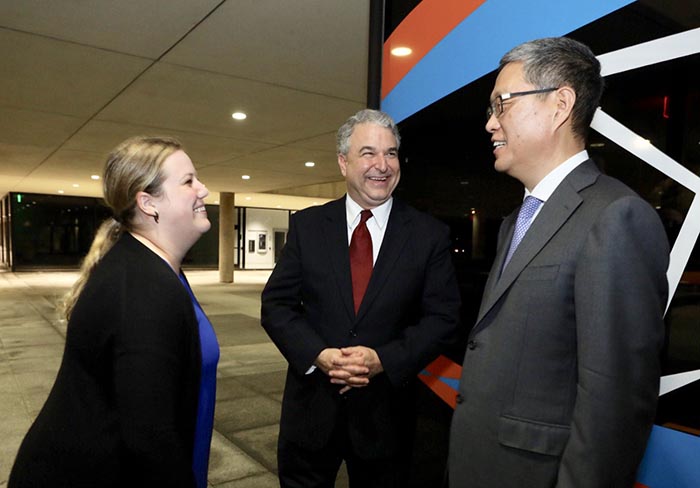 Last night, The University of Texas China Public Policy Center (CPPC) at the LBJ School of Public Affairs hosted its inaugural event, focused on prospects for U.S.–China relations. The event was co-hosted by the China-United States Exchange Foundation, a Hong Kong-based non-profit dedicated to promoting a positive relationship and better understanding between China and the United States.

The CPPC’s founding executive director, David J. Firestein, was joined by special guests Ambassador He Yafei, a former top-level Chinese diplomat who served as vice minister of foreign affairs, and Daniel M. Slane, a member of the U.S.-China Economic and Security Review Commission.

The center’s first event was indicative of its mission—as described by Firestein, “to advance innovative China-related policy research and action in ways that serve and leverage the comparative advantages of the LBJ School, The University of Texas, the city of Austin and the state of Texas.”

Since its inception on Aug. 28, the center has already involved several LBJ School students, fostered a number of important international connections and developed a corporate partnership with Dell Technologies.

First-year Master of Global Policy Studies student Richelle Ramey became interested in working with CPPC as soon as she heard about its launch at LBJ. “My interest in Chinese foreign policy developed from a young age while I lived overseas and has only gotten stronger through my undergraduate and graduate studies,” she said. “I feel honored to be able to help the CPPC with their inaugural event and I’m excited to hear the opinions of the speakers on the issues of U.S.-China relations after President Trump’s visit and the conclusion of China’s 19th Party Congress.” 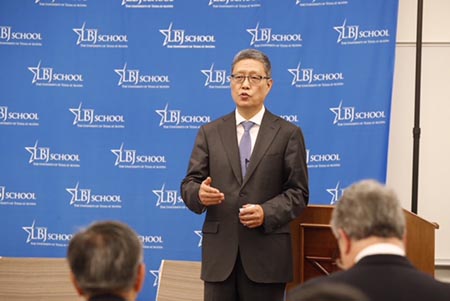 “For these two major powers that are so different to work together … is a big challenge,” he said, but the potential for cooperation is nevertheless unlimited. And, he continued, the countries’ global stature brings a special responsibility in the world surrounding the maintenance of global peace and security as well as the promotion of global economic growth.

Though China has long been viewed by the U.S. as “neither friend nor foe,” Ambassador He suggested moving forward through the lens of “a comprehensive partnership based on mutual trust and benefit,” and cooperating to take up global challenges like climate change, energy issues and to roll back anti-globalization sentiment.

Ambassador He closed his remarks with a recognition of a current momentum for progress and a message of hope for the future.

“Our two leaders [U.S. President Donald Trump and Chinese President Xi Jinping] have come to an understanding”—that cooperation is important not only for the two countries but also for the future of the world.

The CPPC event ended with a panel discussion among Ambassador He, Mr. Slane and Mr. Firestein, who served as moderator. The three discussed issues of globalization, U.S.-China trade, the escalating situation on the Korean peninsula, and other issues.