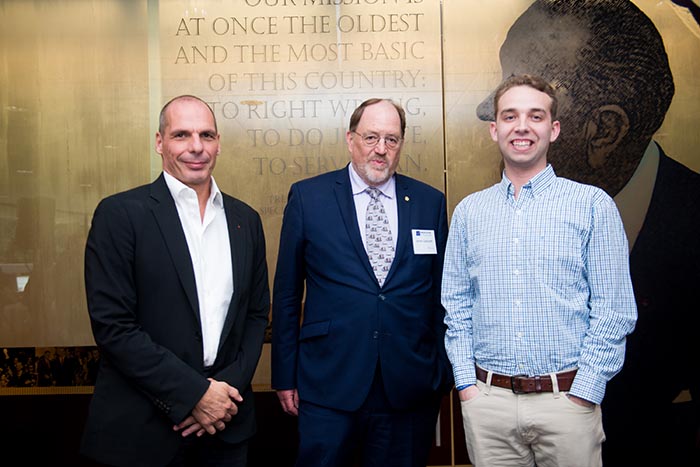 Some of Europe’s leading political figures, including the former finance minister of Greece Yanis Varoufakis, former French presidential candidate Benoît Hamon and UK Shadow Minister for Industrial Strategy Chi Onwurah, convened at the LBJ School of Public Affairs at The University of Texas at Austin on November 6 – 7 to explore both the promises and challenges of democratic reform of Europe's governing institutions.

The conference explored an economic and political agenda for a transnational democratic reform movement in Europe built on the proposition that the European Union should be preserved, but must be reformed in order for it to survive,” said James Galbraith, a professor at the LBJ School and the conference organizer.

“Democratic Reform in Europe” is the fourth in a biennial series of Texas conferences on European issues.

“Texas is a multi-cultural, multi-ethnic, multinational border-land with important connections to Europe that included (but are not limited to) the German settlement here in the 19th century, with a tradition of debtors' rights that illuminate political parallels to the debtor countries of modern Europe, and with an instructive 20th century history as an important center of the New Deal and the state at the origin of the Great Society,” Galbraith said. “So the experience of Texas and Texans has many important parallels to the problems of modern Europe.”

Interesting discussions and insights from a broad range of panellists at the Democratic Reform in Europe conference @thelbjschool #eurconf pic.twitter.com/FcRlmhKcqh

Aleksej Demjanski, a dual-degree Master of Global Policy Studies and Russian, East European and Eruasian Studies student, attended the conference because the content aligned with his research interests.

“My research focuses mostly on democratization in Central and Eastern Europe,” he said. “So it was great that there was an event which focused on these issues and took place at the LBJ School.”

I gave the closing keynote @TheLBJSchool #EURConf on Tuesday, talking about the need to build a new social agenda for Europe. If you missed it you can check out the video here: https://t.co/QNQwreNuII pic.twitter.com/BKrQyX3crY

“As a former game theorist, choose your metaphors wisely - & soccer is a bad metaphor for Europe, bc this is not a zero sum game.” #EURConf pic.twitter.com/VlVAXSOGSi

“The mix of panelists discussing both the economic concerns in Europe as well as the political issues and the need for grass roots social movements was a unique way of approaching some of the challenges facing the European Union and Europe as a whole,” Demjanski said. “It was wonderful that the LBJ School hosted such a conference.”

“The LBJ School provides a venue for discussions on Europe that is both engaged and detached: deeply invested in the analysis of questions of political economy of all kinds, and at the same time, sufficiently distant from the various parties to political and economic discussion in Europe to provide a platform for an immensely free, diverse, open and challenging discussion,” Galbraith said. “Further, the university and the city of Austin are in every way ideal as the locus for such a meeting.”

Thank you to our #EURConf speakers & attendees for exploring the prospects & possibilities of reform in Europe! See you in two years. pic.twitter.com/WVgyN4ED9q