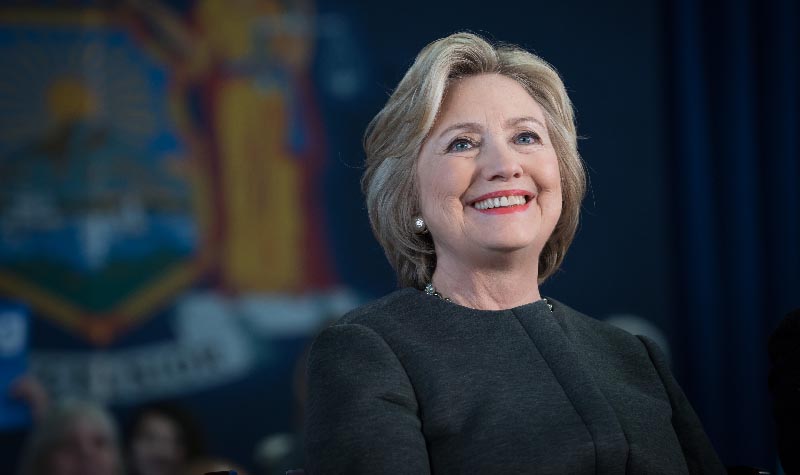 AUSTIN, TEXAS, Nov. 1, 2018—The LBJ School of Public Affairs at The University of Texas at Austin (UT), with support from the Lyndon Baines Johnson Foundation, will present its inaugural In The Arena award to the Honorable Hillary Rodham Clinton. The LBJ School established this prestigious award to honor an individual who has demonstrated — with purpose, perseverance, courage, integrity and empathy — commitment to public service, in service of the greater good.

Secretary Clinton will receive the In The Arena award on Nov. 13, 2018, during a private evening ceremony in the Lady Bird Johnson Auditorium in Austin, Texas. Following the presentation, Secretary Clinton will engage in a conversation before students, community leaders and special guests.

Student engagement has been central to the planning, development and execution of the award. Graduate students from the LBJ School, representing the next generation of public leaders, will be afforded the opportunity to meet with Secretary Clinton privately. Students from UT's School of Design and Creative Technology at the College of Fine Arts, under the guidance of Professor Jiwon Park, designed the In The Arena physical award to be presented to Secretary Clinton. Students at UT's Radio-Television-Film department at the Moody College of Communication, under the direction of Professor Paul Stekler, collaborated with the Austin-based ad agency GSD&M to develop a multimedia tribute to Secretary Clinton.

"Secretary Clinton's extraordinary career in service to the public reflects the true meaning of President Theodore Roosevelt’s remarks. ... She has been persistent in her pursuit of social justice, boundless in the energy she applies to her work and driven by sheer grit to overcome what, at times, seemed like insurmountable odds."
—LBJ School Dean Angela Evans

The award is inspired by Theodore Roosevelt's "The Man In The Arena" speech, delivered at the Sorbonne in Paris, France on April 23, 1910. President Roosevelt said:

The credit belongs to the man who is actually in the arena…; who spends himself in a worthy cause; who at the best knows in the end the triumph of high achievement, and who at the worst, if he fails, at least fails while daring greatly, so that his place shall never be with those cold and timid souls, who neither know victory nor defeat."

"Secretary Clinton's extraordinary career in service to the public reflects the true meaning of President Theodore Roosevelt's remarks," said Angela Evans, dean of the LBJ School. "She has been both passionate and persistent in her pursuit of social justice and economic opportunity for all both here in America and around the world. Her boundless commitment to her work has been driven by sheer grit to overcome what, at times, seemed like insurmountable odds. She has been bloodied, she has erred, she has sometimes failed, but she has persevered. Being in the arena and serving the greater good has been her life's journey. We are honored to present the first In The Arena award to Secretary Hillary Clinton for all that she has achieved despite extraordinary obstacles."

Hillary Clinton was born in Chicago, Illinois on Oct. 26, 1947. After graduating from Wellesley College and Yale Law School, she began her lifelong work on behalf of children and families by joining the Children’s Defense Fund. In 1974, she moved to Arkansas, where she married Bill Clinton and became a successful attorney while also raising their daughter, Chelsea.

As first lady of the United States from 1993 to 2001, Hillary Clinton championed health care for all Americans and led successful bipartisan efforts to improve the adoption and foster care systems, reduce teen pregnancy, and create the Children's Health Insurance Program.

In 2000, Clinton made history as the first first lady elected to the United States Senate, and the first woman elected to statewide office in New York. As senator, she worked across party lines to expand economic opportunity and access to quality, affordable health care. After Sept. 11, 2001, she helped to rebuild New York and provide health care for first responders.

In 2007, she began her historic campaign for president, winning 18 million votes and becoming the first woman to ever win a presidential primary or caucus state.

In her four years as America's chief diplomat and the president's principal foreign policy adviser, Clinton led the effort to restore America's leadership in the world. She negotiated a cease-fire in Gaza that defended Israel's security and headed off another war in the Middle East, mobilized an international coalition to impose crippling sanctions against Iran, and championed human rights around the world, as she has her entire career.

In 2016, Clinton made history again by becoming the first woman nominated for president by a major U.S. political party. As the Democratic candidate for president, she campaigned on a vision of America that is "stronger together" and an agenda to make our economy work for everyone, not just those at the top, earning the support of nearly 66 million Americans.

Hillary Rodham Clinton is the author of seven best-selling books. What Happened – released in September of 2017 – spent 16 weeks on the New York Times Best-Seller List.

She and President Clinton reside in New York, have one daughter, Chelsea, and are the proud grandparents of Charlotte and Aidan.

Background on the LBJ School
The LBJ School, one of the nation's top public affairs schools, has a unique legacy of tackling the most complex policy problems of our day by creating innovative approaches that make a difference, not only within the walls of academia but also in the public and social dialogue of the world. Advancing scholarship and contributing viable solutions to society is the LBJ School's legacy and its path forward. More than 4,500 graduates are the living legacy of President Johnson’s bold and fearless action. For more, visit lbj.utexas.edu/.

Background on the LBJ Foundation
Lyndon and Lady Bird Johnson created the LBJ Foundation, a 501(c)(3) nonprofit organization, to support the LBJ Presidential Library and the LBJ School of Public Affairs at The University of Texas at Austin. The Foundation's support to the library helps to enhance quality public programming, expand educational outreach, and bolster exhibition creation, as well as aids students and academics in their research by providing grants and fellowships. The foundation's support to the LBJ School helps to continue the school's outstanding education for graduate students in public policy and governmental affairs, as well as expands their community outreach and exploration of global initiatives. These two institutions, one looking to the past and the other to the future, provide an ongoing legacy for President Johnson's accomplishments and his vision for our nation.