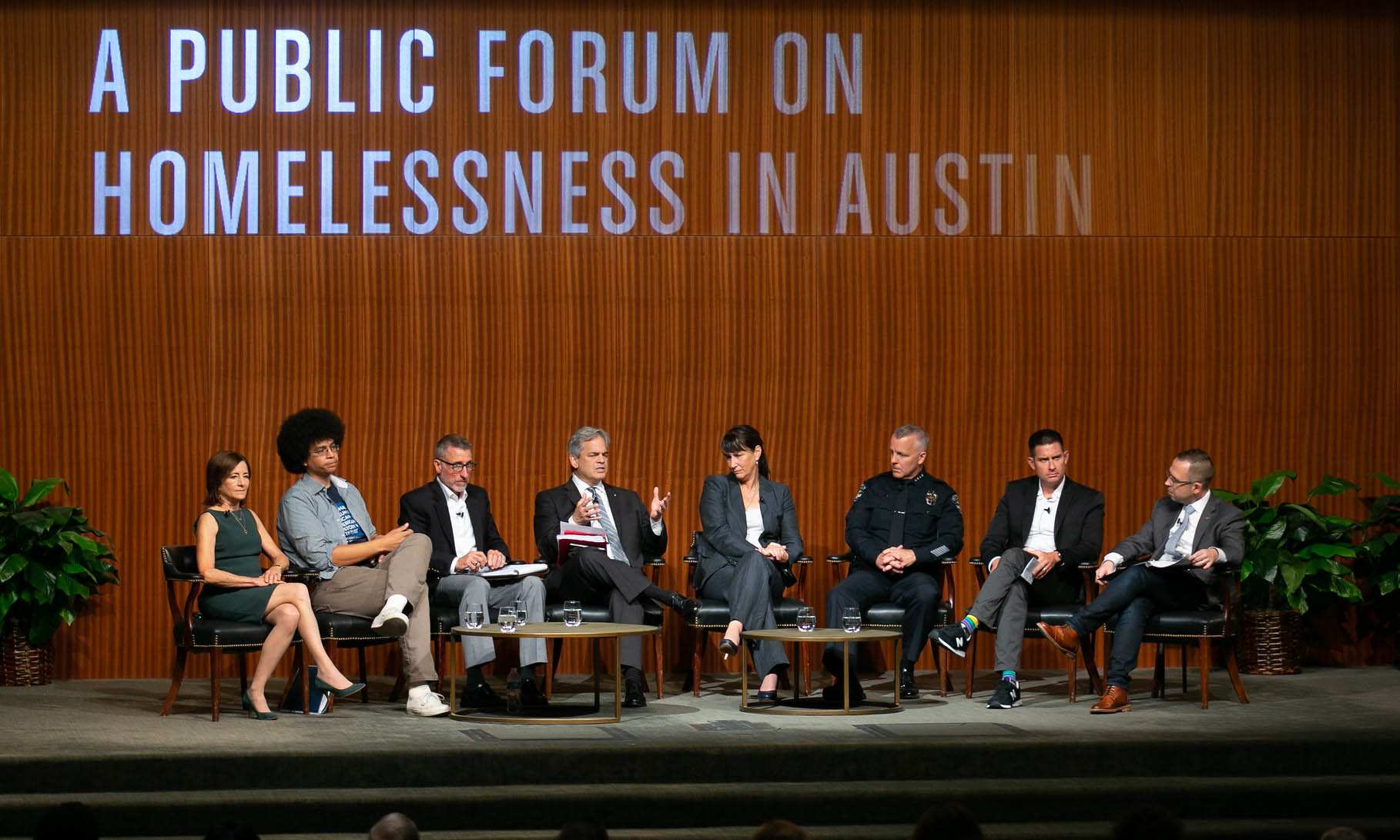 The event drew hundreds to talk about recent changes to Austin's public order ordinances and solutions for those experiencing homelessness in the metro area.

On Aug. 29, the LBJ School of Public Affairs and the LBJ Foundation hosted a public forum featuring city officials and community leaders to discuss the city's plans to move forward with solutions for individuals experiencing homelessness in Austin.

The Public Forum on Homelessness in Austin in the media:

The Public Forum on Homelessness in Austin on social media:

.#atxhomelessforum The @Nextdoor racism is very palpable in this room right now. I can’t believe some of the community comments I’m hearing right now. No the homelessness is not making you unsafe; you need to check your data and check your privilege. @TheLBJSchool @austintexasgov

Chris Harris from Homes not Handcuffs: "People who are camping in your neighborhoods are your neighbors, too." #ATXhomelessforum pic.twitter.com/Wj4OtlJLTj

#atxhomelessforum Chris Harris: homelessnes is extreme poverty and in the richest country we have a duty to do all we can to end it. @chrisharris101 pic.twitter.com/XFROtxQ1Ma

OurExecutive Director, Susan McDowell, is participating in a panel this evening on homelessness. She’ll be sharing the ways that we’ve already made an impact on #endingyouthhomelessness #atxhomelessforum #atxcouncil pic.twitter.com/aXYWEAtHns

People yelling about the homeless shelters placement reminding me of angry racists and what that was like for black people in past. Yikes #ATXhomelessforum

Chris Harris with the biggest applause line of the night. Reminds us all that homeless people are our neighbors. #atxhomelessforum

A solid panel here at tonight’s #ATXHomelessForum. If you can’t make it to the LBJ Auditorium, watch a livestream here: https://t.co/Chlq9AgcLR pic.twitter.com/mZyNUdMm1v

Did you know that aging out of foster care and moving in and out of the juvenile justice system are some of the biggest causes for youth experiencing homelessness? #atxhomelessforum #EndYouthHomelessness pic.twitter.com/l2IKo20zZm

Panel - The more we can do to share data on homelessness across all systems of care the more efficiently we can serve people and quickly move people out of homelessness.

Ok, let's implement a Homeless Data Sharing Network to do this. #ATXhomelessforum

Our state leaders need to also support solutions for homelessness.

The state of Texas has a homeless problem, and our city for doing something about it. #ATXHomelessForum

Why does the downtown alliance get a seat on every homelessness forum? #atxhomelessforum

"People just being in a place is not 'criminal activity'." #ATXHomelessforum pic.twitter.com/2lf3NNVE4g

Attending tonight’s Public Forum on Homelessness in Austin, with a packed room. I’m excited to hear a solutions-oriented discussion focused on how we can help our neighbors! #ATXHomelessForum pic.twitter.com/gJkFhdfRZP

“There are more deaths from hazing on this campus than there are from homeless people.”

It has been 50 mins and the moderator hasn’t asked @chrisharris101 a question in 49 mins. Every other panelist has been asked to weigh in on numerous issues. #atxhomelessforum