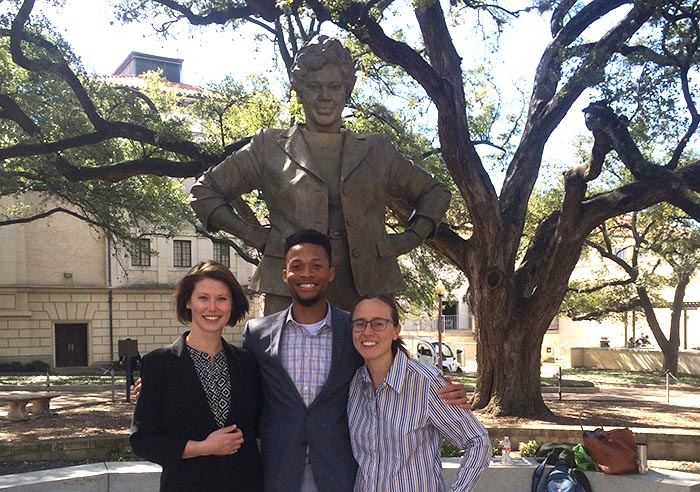 AUSTIN, Texas — The LBJ School of Public Affairs at The University of Texas at Austin will honor the life and legacy of former congresswoman, distinguished public servant and teacher Barbara Jordan during the 20th annual Barbara Jordan National Forum (BJNF), Feb. 20-24 at the LBJ School. The theme of the student-led weeklong event is "Emboldened Public Service: Challenging Wrongs for a Just Society," inspired by a quote from Barbara Jordan's remarks at "The Johnson Years: LBJ: The Differences He Made," a symposium sponsored by UT and the LBJ Presidential Library in 1990.

"If the society today allows wrongs to go unchallenged, the impression is created that those wrongs have the approval of the majority." —Barbara Jordan

Highlighting the week­long tribute will be separate lunchtime events at the LBJ School featuring Barbara Jordan biographer, professor and political adviser Mary Beth Rogers on Tuesday, Feb. 21, and 20-term Texas State Rep. Senfronia Thompson (D-Houston) on Wednesday, Feb. 22. In addition, a special screening of the recently released documentary biography "Get in the Way: The Journey of John Lewis," will be presented on Feb. 21, 2017 (both Rep. John Lewis's (D-Ga.) and Jordan's birthday) at the LBJ Presidential Library. NOTE: These three events require an RSVP, as space is limited.

LBJ School student organizations will also lead programming on social justice issues throughout the week. Students from the LBJ School close the week with a visit to Barbara Jordan Early College Prep School in Austin for a day of service and program commemorating their namesake's many accomplishments and achievements. 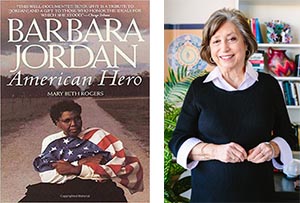 Mary Beth Rogers, author of Barbara Jordan: American Hero, was a teaching colleague of Jordan's at the LBJ School serving as the Lloyd M. Bentsen Chair in Business and Public Policy from 1993 to 1995. She will provide a personal glimpse into the extraordinary life of Jordan during her keynote luncheon, "What Would Barbara Jordan Do," on Tuesday, Feb. 21, from 12:15 p.m. to 1:45 p.m. at the LBJ School. Barbara Jordan: American Hero will be available for purchase, and a book signing will follow the luncheon. Rogers, who is recognized as the last person to successfully campaign-manage a Democrat, Ann Richards, to the statehouse in Austin, first met Jordan when Jordan was serving as Gov. Richards's special counsel on ethics. Rogers is also the former president and CEO of KLRU, Austin's PBS affiliate. 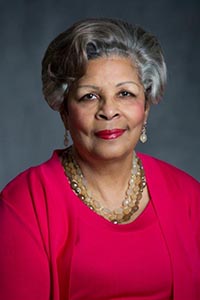 Rep. Senfronia Thompson shares with Jordan a rich history of impassioned public service, often in the face of fierce resistance. She will provide remarks at a special lunchtime presentation from 12:15 p.m. to 1 p.m. on Wednesday, Feb. 22 at the LBJ School. Rep. Thompson, who has begun her 20th term in the Texas House of Representatives, has served longer in the Legislature than any other woman or African-American in Texas history. Her legislative victories, fearlessness and lessons learned over 20 terms is befitting of the signature BJNF tribute honoring a kindred Texas congresswoman. The Network of Schools in Public Policy, Affairs and Administration (NASPAA) and Citizens for Local and State Service (CLASS) will host a reception following Rep. Thompson's keynote address to allow and encourage students, alumni and guests to continue the dialogue, foster community connections and celebrate Jordan's legacy of public service. 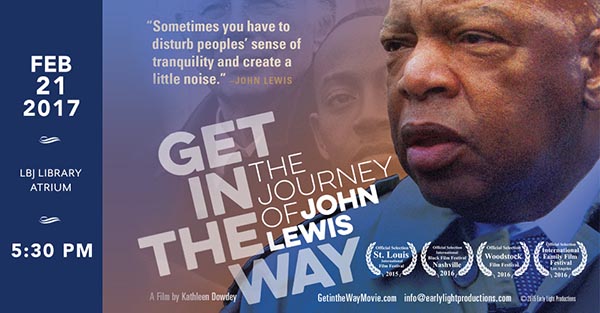 In honor of both Black History Month and the 20th Annual Barbara Jordan National Forum, the LBJ School, in coordination with the LBJ Presidential Library, will present a screening and discussion of "Get in the Way: The Journey of John Lewis." This 60-minute film chronicles Rep. Lewis' courageous and unwavering fight for justice and hard-won achievements. The event will take place at the LBJ Presidential Library and a panel discussion will follow the screening that begins at 6 p.m. on Feb. 21. Panelists include the film's director Kathleen Dowdey, president of the Austin chapter of the National Association for the Advancement of Colored People (NAACP) Nelson Linder and associate professor of government at UT Austin and a scholar of black congressional history Tasha Philpot. Award-winning documentarian Paul Stekler, a professor of public affairs at the LBJ School and the Department Chair of Radio-Television-Film at the Moody College of Communication, will serve as moderator. The screening is free and open to the public. More details are available here.

"A key element of the Barbara Jordan Forum is engaging with students as both learners and as leaders," said Cassie Gianni (MGPS '17), a Barbara Jordan Forum co-chair. "The week is full of events that are envisioned and organized by students for students. It has been a pleasure collaborating with my peers to realize a dynamic week full of educational opportunities."

The Social Policy Network (SPN) will also feature a photography exhibit in the LBJ School lobby throughout the week, which serves to highlight how LBJ students promote social justice and embody the spirit and resolve of Barbara Jordan.

The week concludes with a program and day of service at Barbara Jordan Early College Prep School on Friday, Feb. 24 from 9 to 11 a.m. The elementary school will host a reading on Barbara Jordan's legacy for pre-K through second grade students and a larger honorary program for third through fifth grade students, parents and teachers. The LBJ School's Barbara Jordan Chair in Ethics and Political Values and the founding director of the Center for the Study of Race and Democracy Peniel Joseph will deliver the program’s keynote address.

The Annual Barbara Jordan National Forum, traditionally held in February since its inception in 1997, is organized by LBJ School students and designed to celebrate the former congresswoman's contributions as a politician, policymaker and educator. Barbara Jordan made history throughout her career and is recognized as both the first black woman to serve in the Texas Legislature and the first Southern black woman elected to the U.S. House of Representatives. Her national profile grew when she served as a moral compass during the Watergate Scandal and as the first African-American keynote speaker at a Democratic National Convention. She is remembered as a groundbreaking politician and unwavering voice for justice and equality.