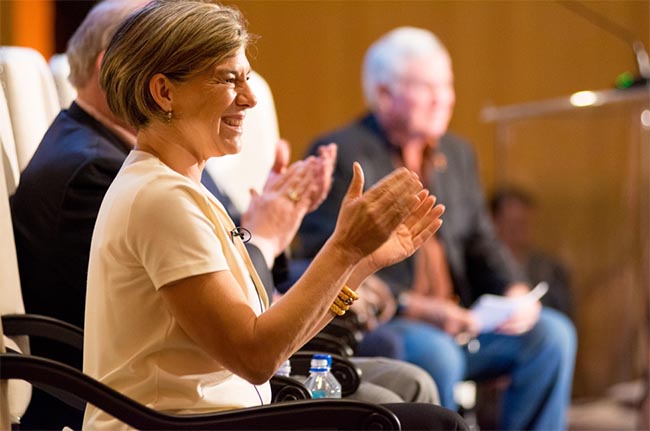 The Forty Acres possesses an unrivaled edge in Texas. A tier-one research university boasting rapid new discoveries in a state capital with close proximity to the longest foreign border in the United States, The University of Texas at Austin is not just on the edge of knowledge, but it is also the edge.

The Texas Edge program brings the best of UT Austin to alumni and friends across the nation and around the globe, giving audiences an up-close look at how UT is changing the world. The LBJ School's Charlee Garden, a lecturer and leadership development consultant, participated in the Los Angeles event on May 12. She joined Longhorn leaders including former head football coach Mack Brown, women's athletics director Chris Plonsky, men's athletics director Mike Perrin, and corporate counsel to Amazon Studios and Texas Ex Jerren Wright. The panel discussed how the university prepares Longhorns for success beyond the Forty Acres. 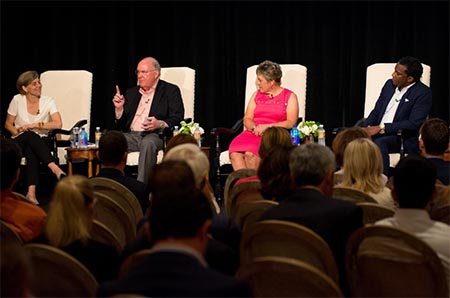 Garden, who teaches courses on leadership and provides leadership consulting to companies like Google and Goldman Sachs, said leadership is optional, and we must learn to see opportunities for leadership, even when we aren't in charge.

"It's easy for all of us to imagine how we would lead if we were in charge," she said. "The challenge is to see the opportunity to lead right here, right now, no matter what your role."

"It's easy for all of us to imagine how we would lead if we were in charge. The challenge is to see the opportunity to lead right here, right now, no matter what your role." —Charlee Garden

The panelists discussed their commitment to student-athletes as students, as athletes, and most importantly, as people. This was evident by Plonsky's warm reunion with former UT softball player and LBJ School alumna Alexis Garcia, as well as Brown's rapport with several former players, including co-panelist Wright. 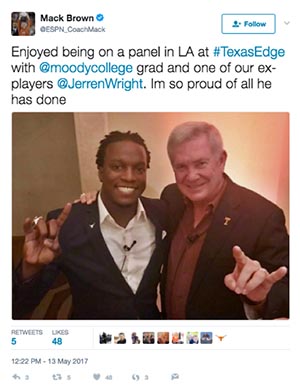 Perrin illuminated the leadership skills that can be learned through sports, teamwork and discipline. Garden built on that sentiment, emphasizing the importance of failure.

"If you haven't failed recently, either you are perfect or you aren't taking risks," she said. "In order to grow as a leader, a student or an athlete, you have to be willing to push your comfort zone. As a former competitive skier, I live by the credo, 'If you don't fall, you aren't skiing hard enough.'"

"You have to take crises and turn them into positives," Brown said during the panel. "That's what we're teaching at The University of Texas." 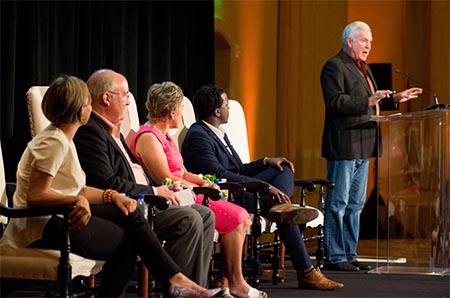 Passion is contagious, Garden added. Thus, leadership is a team sport. She recounted an example of an LBJ School student and Army veteran, Johnny Shaw, whose passion fueld him and othes to reunite a refugee family who had been separated. For Shaw, this was personal, as a member of the refugee family was a former translator for the US Army. Shaw stepped out of his comfort zone to lead, despite rank and position.

"He was used to being able to tell people what to do, and in the Army, if you are higher ranked, they listen," Garden said. "To help this family, he had to learn how to inspire others to act—he couldn't solve this alone and he wasn't in charge. Shaw inspired people, who inspired other people, who inspired other people, and the family was reunited in Houston, Texas, in mid-April."