The Graduating Class of 2018: Tasha Bylenok | LBJ School of Public Affairs | The University of Texas at Austin
Skip to main content
Feature • May 4, 2018

The Graduating Class of 2018: Tasha Bylenok

Tasha Bylenok remembers the first time she walked into the LBJ School.

"I attended a prospective student day at the LBJ School, and I got to chat with several students who seemed so happy and involved," she said. "I got a really good sense of the community here and a good vibe from the school. That's when I decided I was going to apply."

Bylenok, who then worked as a staff member at UT's Jackson School of Geosciences, applied in the fall of 2015 and was accepted the following spring. "I dove right in," she said.

Bylenok attended Camp LBJ, a former summer enrichment program for new students that included rigorous academic courses, professional development workshops and plenty of social activities. "The one thing that really surprised me was how immersive it was," she said. "There were tons of social events and opportunities to get to know my classmates. It's crazy but Camp LBJ seems like yesterday."

"It's a once-in-a-lifetime thing." 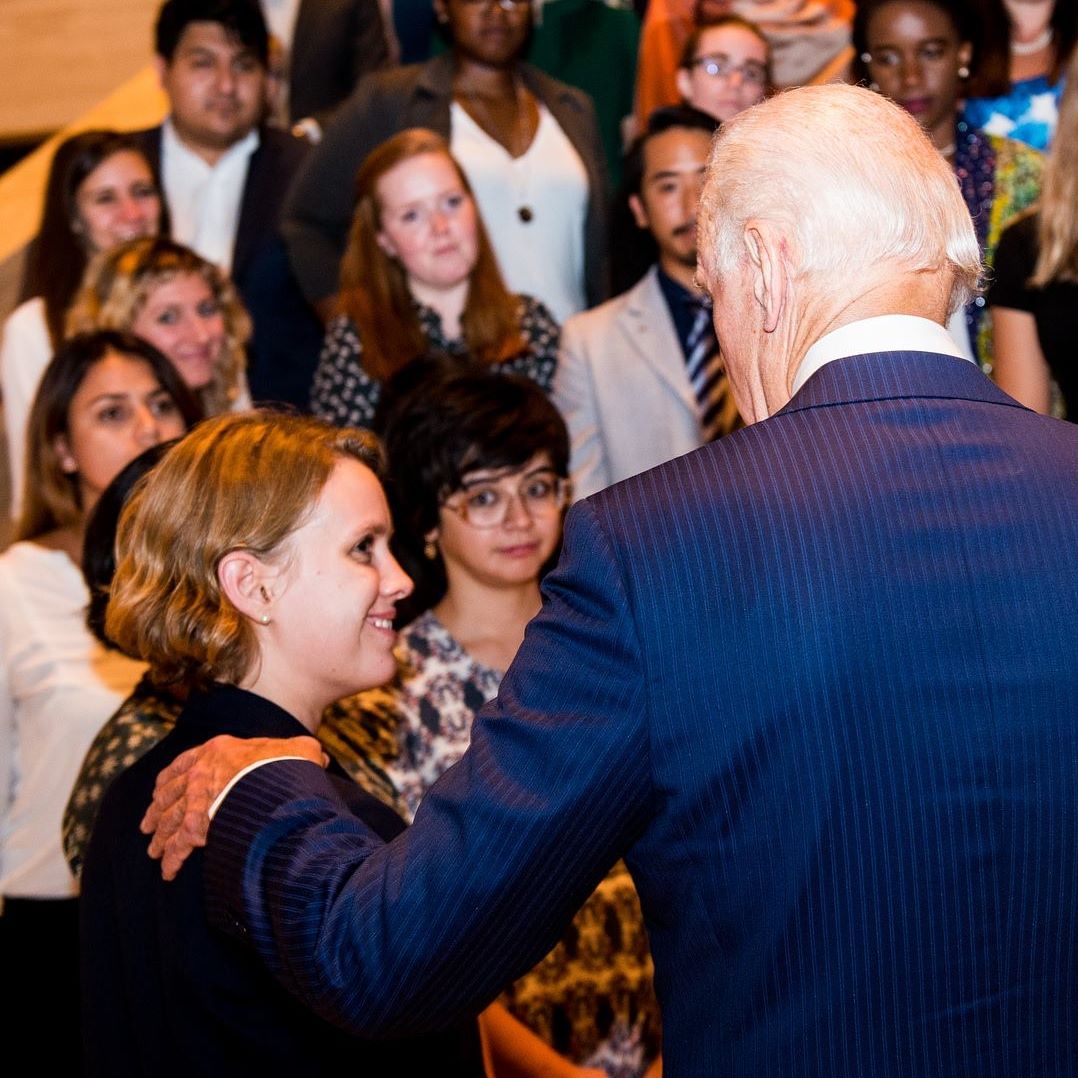 Many visitors come through the school's doors. Bylenok says those visits were important to her time at LBJ.

"When Madeleine Albright came, she had some prepared remarks but it was mostly an intimate conversation where students could ask her questions," she said. "To have that kind of access to somebody who was Secretary of State . . . that's pretty amazing."

Bylenok also recalls students' opportunity to meet with former Vice President Joe Biden. "His flight ended up coming in late, and I was kind of anxious because I had an assignment due," she said. "But it is Joe Biden so it's a once-in-a-lifetime thing."

It was worth the wait. "He touched my arm for emphasis when he was saying something about the middle class. It's great students are able to get time in small groups with these really powerful people." 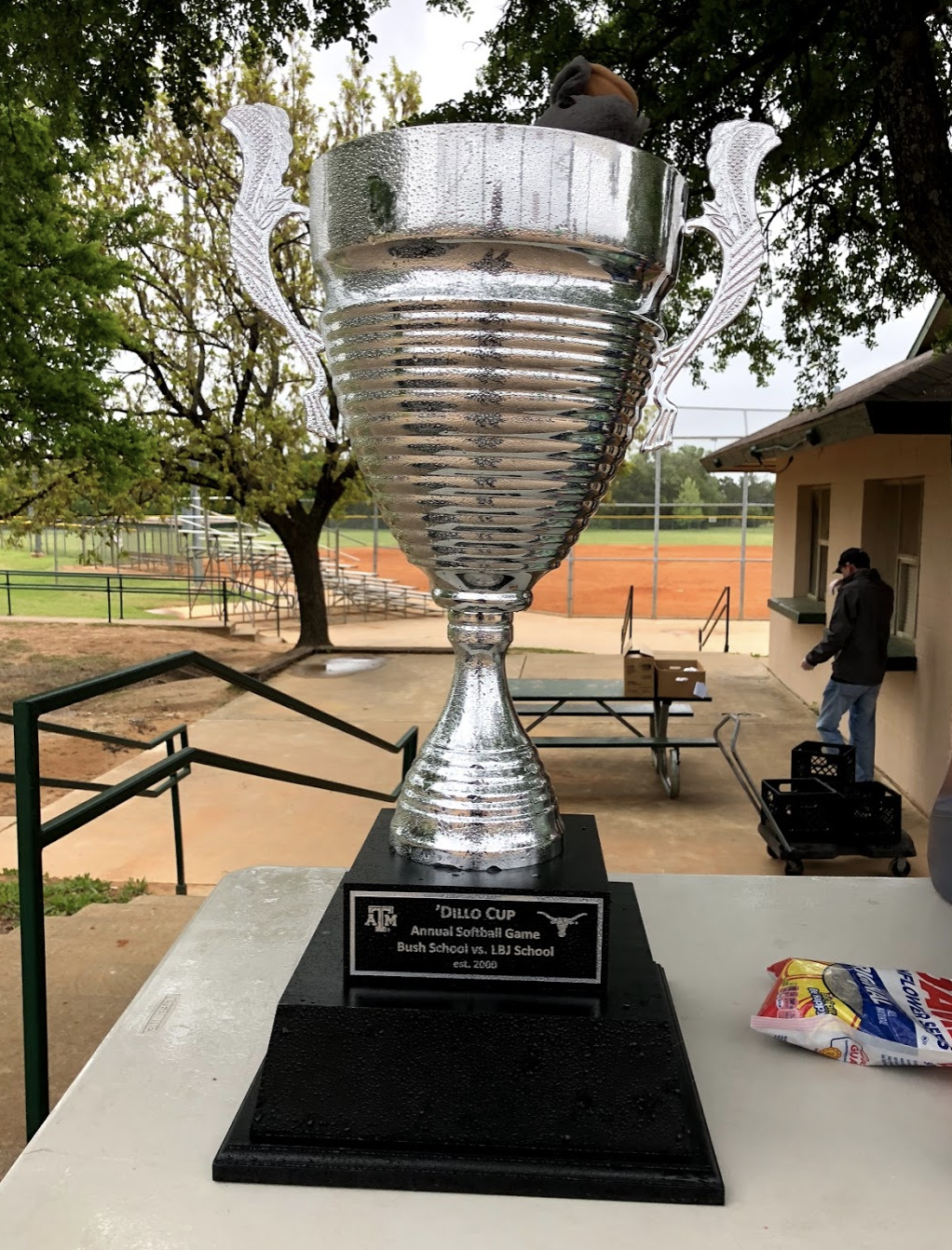 "I've had so much fun with all of the traditions like winter formal, the Dillo Cup and Follies," Bylenok said.

Each year, the LBJ School and the Bush School face off in a rivalry for the ages: a softball game called the Dillo Cup. "A small contingent of LBJ School students took the bus out to College Station, and we just had so much fun screaming our hearts out," she said. "It was fun to meet our counterparts at the Bush School and broaden our social network."

"It was such a fun and magical night." 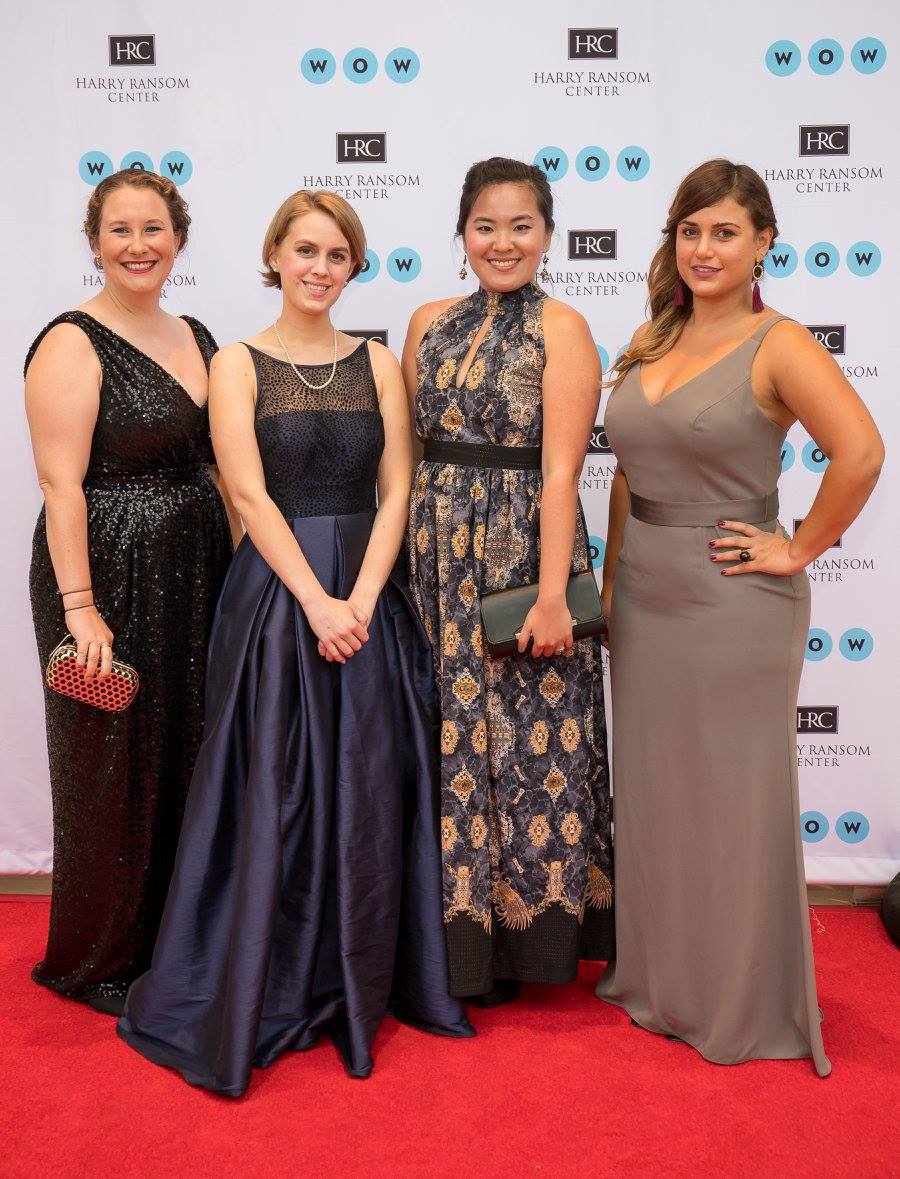 Bylenok was among the group of students invited to attend.

"I feel like I had so much access to amazing people and experiences. There's so many things like this I would never have gotten to do if I weren't a student at the LBJ School." —Tasha Bylenok (MPAff '18)

Bylenok said she and fellow female students rented dresses from Rent the Runway and got ready together before the gala. "Several of us got together beforehand to get dressed up and do our makeup. Harry Ransom Center showed off several pieces from their collection that don't get to be seen very frequently," Tasha said. "They transformed the plaza into a beautiful backdrop, and we got to meet President Fenves and Sally Quinn. It was such a fun and magical night."

The LBJ Graduate Public Affairs Council (GPAC) is a student government body designed to serve the needs of the LBJ School community. GPAC facilitates student initiatives, fosters discussion and decision-making and represents and engages in advocacy on behalf of students. Bylenok served as GPAC's president during her final year.

"At the prospective students day, I met the president of GPAC at the time," she said. "The advice I heard going into LBJ was make sure you get involved with GPAC. I got the sense they were the hub of what goes on with student life."

Bylenok joined the finance committee in her first year and was later nominated for president. "I decided just to go for it because I liked the organization, and I'd work really hard for students," she said. "That's been a really good experience."

She said the experience has taught her a lot about herself as a leader. "I took Charlee Garden's leadership class in the fall, and it helped to have coaching in managing a team and organization," she said. "I learned behind the scenes things about the school, and I got to meet with Dean Evans once a month so she could stay up to date on student activities. It was a really positive experience for me."

"Pat Wong is probably the most challenging professor I've taken, but I really enjoyed his class," Bylenok said.

She recalls laboring over one of his problem sets with fellow students at a coffee shop. "We were at a shared table, and the guy next to us overheard us and asked us if we were LBJ students working on Pat Wong's homework," she said. "He was an alum and knew our struggle."

A testament to all she has learned, Bylenok served as a teaching assistant for Wong during her second-to-last semester. "He has high standards for students, but he is such a great teacher," she said.

When asked what advice she would give incoming students, Bylenok said, "I would say you should just go for it. There are so many opportunities, and two years goes by faster than you think so you've got to make the most of it."

"I know I'm entering a really powerful alumni network because I have not met an LBJ alum who wouldn't bend over backwards to help a fellow LBJer," she said. "LBJ has opened tremendous doors for me and coming here has been one of the best decisions I've ever made." —Tasha Bylenok

"I'm so glad I came to the LBJ School," she continued. "Two years ago I could not imagine that I would be in this place about to graduate, go to Washington, DC with a pretty prestigious fellowship." Bylenok will join the Consumer Product Safety Commission as a Presidential Management Fellow after graduation.