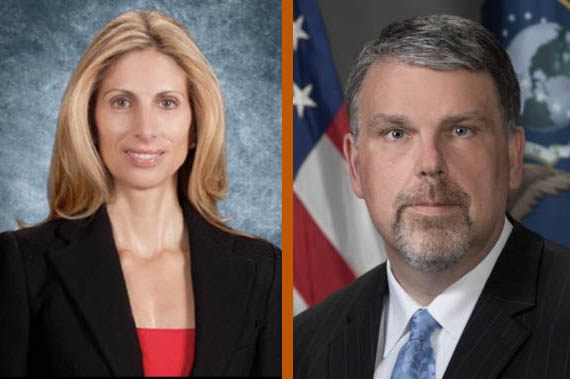 AUSTIN, Texas — Nicholas "Nick" Rasmussen, the former director of the National Counterterrorism Center (NCTC), and Dr. Michele Malvesti, a scholar and former White House counterterrorism adviser, will teach and advise students at the University of Texas at Austin. Rasmussen and Malvesti will hold joint appointments as Senior National Security Fellows at UT's Strauss Center for International Security and Law, Clements Center for National Security and the Intelligence Studies Project. The centers and their joint initiative are affiliated with the LBJ School of Public Affairs.

Admiral (Ret.) Bobby Inman, the LBJ Centennial Chair in National Policy, welcomed Rasmussen and Malvesti as “exceptional public servants and leaders who are uniquely qualified to explain how our government acts to protect citizens from terrorism and other grave threats.” Admiral Inman noted, "the addition of two of America’s leading experts on terrorism bolsters UT's already strong reputation in national security studies."

Rasmussen is the senior director for counterterrorism programs at the McCain Institute for International Leadership in Washington, DC. He led NCTC from 2014 to 2017, serving previously as the center's deputy director and as special assistant to presidents George W. Bush and Barack Obama, as well as as the National Security Council's (NSC) senior director for counterterrorism. Rasmussen began his public service career in 1991 as a presidential management intern at the State Department after earning a B.A. from Wesleyan University and an MPA from Princeton University’s Woodrow Wilson School of Public and International Affairs. Rasmussen will lecture in spring semester courses and plans to teach in Austin in the fall.

Dr. Malvesti is a vice president at the Financial Integrity Network in Washington, DC. Her public service began in the early 1990s as a terrorism analyst in the intelligence community and culminated with her appointment as the NSC's senior director for combating terrorism strategy. Dr. Malvesti was a professor of international security studies at the Fletcher School of Law and Diplomacy at Tufts University, where she earned her MALD and Ph.D. She also taught at Yale University, where she was a senior fellow at the Jackson Institute for Global Affairs. She led a popular seminar, "The Power and Politics of Gender in Global Affairs," during UT's 2019 spring semester.

Clements Center Executive Director William Inboden added, “Having previously worked with Nick and Michele during my own government service, I saw firsthand what dedicated national security professionals they are. Now it is a surpassing honor to have them join our national security team here at UT."

ISP Director Steve Slick observed that "Nick and Michele are both sophisticated producers and users of intelligence, and rank among the finest colleagues with whom I was privileged to serve in government."