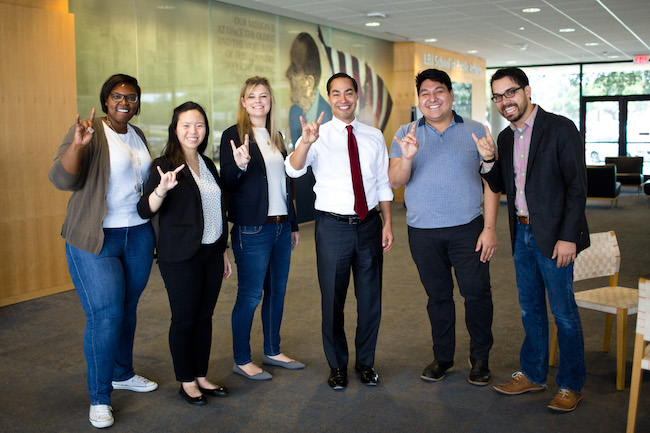 AUSTIN, Texas, Aug. 29, 2017 — Julián Castro, who served as the 16th United States secretary of Housing and Urban Development (HUD) under President Barack Obama from 2014 to 2017 and mayor of San Antonio from 2009 to 2014, will join the LBJ School of Public Affairs at The University of Texas at Austin in September 2017. Castro will serve as the Dean's Distinguished Fellow and Fellow of the Dávila Chair in International Trade Policy.

As the Dean's Distinguished Fellow, Castro will join the faculty of the LBJ School in designing innovative approaches to the study of public policy, governance and politics. Initially, Castro will lead a seminar series examining the complexities of policy development through the lens of housing. The series, "Policy Matters: Tackling Public Issues Through the Lens of Housing," will begin in January 2018. 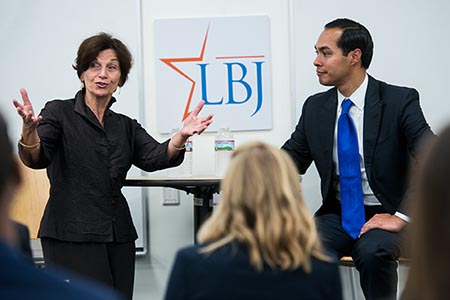 As fellow of the Dávila Chair in International Trade Policy, Castro will contribute to the School’s strategic engagement with Latin America to tackle complex economic, political, technical and social policy issues. The Dávila Chair was created by Jaime and Pilar Dávila in honor of Victor Ramón Dávila, Sr. to recruit and retain a holder of world-class stature with serious interest in U.S.-Mexico trade policy.

"Education has always been one of my top priorities," Castro said. "The LBJ School is rooted in the bold legacy of President Lyndon B. Johnson and his vision of a school that produces thinkers and doers. This is an extraordinary time for young people to dedicate their futures to public service, and the LBJ School under the leadership of Dean Evans recognizes the need to make transformative changes in the way we prepare the next generation of public leaders. I'm eager to be a part of this modern educational environment."

"I'm eager to be a part of this modern educational environment." —Julián Castro

"Mr. Castro brings to our school not only a depth of knowledge of how policy is designed, enacted and implemented, he also exemplifies the highest of public service values: humility, intelligence, empathy, hard work and a strong sense of ethics," said LBJ School Dean Angela Evans. "I am grateful that Mr. Castro has chosen to join our community and to generously share his insights with us. This is an extraordinary opportunity for our students to learn from one of our country's leading public figures."

Castro, a native Texan, born and raised in San Antonio, launched his public service career in 2001, becoming San Antonio's youngest councilman. He was elected to mayor in 2009 and re-elected in both 2011 and 2013. During his tenure as mayor, Castro focused on attracting well-paying jobs in 21st century industries and expanding education opportunities across the city. 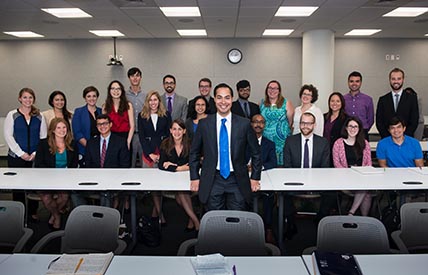 Castro launched into the national arena with his keynote address — the first by a Latino — at the 2012 Democratic National Convention. In 2014, Castro accepted President Barack Obama's offer of the position of United States Secretary of Housing and Urban Development and upon confirmation, served in that role until 2017.

"This is an extraordinary opportunity for our students to learn from one of our country's leading public figures." —Angela Evans, dean

Castro is no stranger to the LBJ School, having delivered the 2014 commencement address when he was San Antonio Mayor. In September 2015, the LBJ School hosted the 50th Anniversary Celebration of the establishment of HUD, at which Secretary Castro delivered keynote remarks in the LBJ Auditorium to nearly 1,000 attendees.

Castro is a graduate of both Stanford University and Harvard Law School.

The LBJ School, one of the nation’s top public affairs schools, makes a difference, not only within the walls of academia, but also in the public and social dialogue of the world. Contributing viable solutions to society is the LBJ School's legacy and its benchmark. Its effectiveness in channeling the purpose and passion of students into professional careers is evident in the success of more than 4,000 graduates who are the living legacy of President Johnson's bold and fearless action. For more, visit lbj.utexas.edu.